St Helena to get an airport 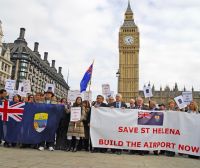 NAPOLEON would not be jumping in his grave as, whilst he died in exile in St Helena in 1821, his remains were transferred to Paris in 1840.  The British Overseas Territory, deep in the South Atlantic, is to gain an airport.  International Development Secretary Andrew Mitchell said the UK had an "obligation" to build the facility and his bean counters have worked out that in the long run it would be cheaper to construct an airport than replace and subsidise the current RMS Helena.  With a proper airport there is a great chance that the island, said to be one of the most remote places on earth, could become economically self-sufficient and a tourist paradise. www.sthelenatourism.com