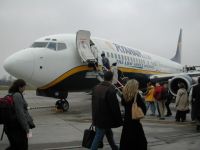 RYANAIR is to pay a dividend to its shareholders in October using funds previously allocated for the purchase of new aircraft from Boeing.  Floated in 1997, the shares, in common with other airlines, have been spectacular with their ups and downs peaking over €6 (Spring 2007) and dropping towards €2 by the autumn of last year.   Ryanair reported a  profit of €319m after tax for its fiscal year ended 31 March, as against €105 for the previous 12 months.  Scheduled services revenue grew less than 1% as average fares fell 13% and ancillary revenue jumped 10.9% to €663.6m.  51 new aircraft arrived but Ryanair's statement did not give details of departures nor of routes dropped.  It is now the world’s most expensive airline for anyone carrying more than 15kg of luggage.  Ryanair is forecasting 73.5m passengers in the current financial year.
www.ryanair.com