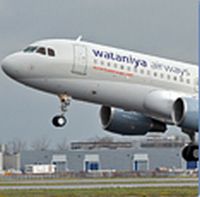 KUWAIT'S WATANIYA AIRWAYS has announced the launch of a new route to the Austrian capital, Vienna.  The carrier will operate three times per week with an Airbus A320 in a First Class and Premium Economy layout.  This is the airline’s second European destination after Rome.  Wataniya is listed on the Kuwait Stock Exchange and made its inaugural flight in January 2009.  It now flies from Kuwait to most of the capitals in the Middle East.  Rather than the main international facility at Kuwait, Wataniya uses the exclusive Sheikh Saad Terminal, essentially an executive aviation facility boasting Fast Track immigration, valet and concierge services, and what is essentially a private lounge. www.wataniyaairways.com