Alison Chambers has visited the World’s most important aircraft cabin services exhibition.  This is what you may experience in the future. 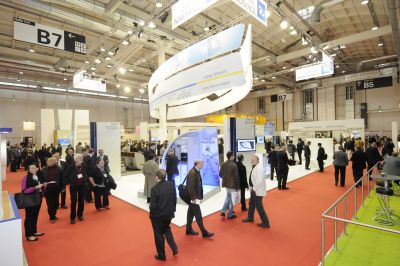 Recession has hit the aviation industry hard these past 12 months, but the aircraft interiors industry seems to be more resilient than most judging by the large exhibitor stands, new innovations and general camaraderie at the 11th annual Aircraft Interiors Expo at the Messe in Hamburg this month.

Serious networking and seeing who’s pioneering what’s new in IFE, communications and cabin/seat design makes this Reed Exhibitions’ Show a must attend for companies courting the world’s airlines.  Some 852 representatives from 200 airlines were in attendance among the 7,316 visitors during the three-day event.  Tim Clark, President of Emirates, noted Aircraft Interiors Expo is “growing in stature” as a result of manufacturers now engaging further with interiors’ suppliers to address issues of weight, strength and durability.  “People like me come here to learn, to counsel and impart some of the things we know as airline operators we are going to need.”

With BE it is exclusive

BE Aerospace was pre-booking appointments exclusively with airline decision makers to showcase their new concepts of First Class seats. 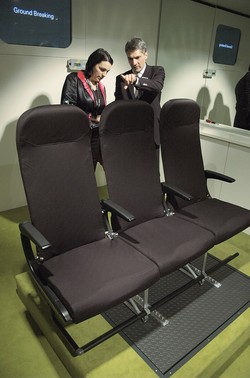 And on the day that Lufthansa formally accepted its first Airbus A380 at Hamburg Airport, showing off an eight-seat, First Class environment, with oak veneer surfaces, sheet brass and tailored sound proofing, the conversation in the halls turned to addressing future travellers’ needs.  At the opening press conference there was discussion on Lufthansa’s decision to opt for 2m long lie flat ‘at an angle’ beds – all 98 of them in Business Class, versus Air New Zealand’s recent move to install lie flat beds in Premium Economy – a class itself that some long haul airlines are still pondering the merits of – against the current climate.

But getting the product right in the Economy cabin is the big challenge, insisted Clark.  “It generates 70% of the income and will continue to do so,” he said.  “Flying ultra long range missions where you expect people to fly in Economy cabins for up to 16 hours, you have to meet the basic requirements.”

Innovation is the name of the game

If innovation is the name of the game then great credit must go to Hamburg-based Dasell Cabin Interiors scooping one of this year’s Crystal Cabin Awards for its revolutionary aircraft lavatory concept.  It can be used as a standard sized 37in toilet.  However, by pulling on two handles on the outside wall of the lavatory, the cubicle can be extended to 52in for use as a changing room or a toilet for disabled people.

Carter Stewart, Aviation Services Director at Prospect Consulting and Design, highlighted that manufacturers need to consider a number of geo-political emerging patterns when designing their aircraft cabins.  “An ageing population requires improved cabin pressure systems, along with a supersized population which is now taller and wider – hence the need for increased space."  The population is living longer and increasingly solo travellers are flying – long haul – in their 80s, he commented.  There is a big challenge for the airline alliances too as they promote their airline’s Business and First Class products, because in some cases the offering from a sister alliance member can be somewhat different. 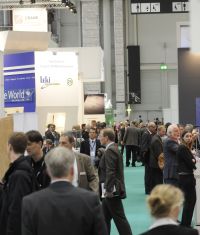 In Hamburg, IFE and communications businesses constituted one of the main exhibitor groups.  ARINC, for example, which was sharing a stand with Inmarsat is advancing with its plans to get its Onboard Internet into service this year.  During the show Qatar Airways announced a deal with Thales to equip up to 60 Boeing 787s with its broadband connectivity services.

Looking after the needs of the younger generation of air travellers – the so called ‘digital natives’ who have a need for constant connectivity, we are not far off the day where passengers bring their own entertainment to aircraft.  Those carriers that provide capacity for usage will win out, a panel discussion noted.  “Manufacturers need to be bold in anticipating this requirement,” added Airbus Head of Interiors Bob Lange.

A new trend for the industry is CTT Systems’ Cair system being fitted for the first time in the First Class cabin of Lufthansa’s new A380s.  Cair is a dual-purpose system which increases cabin humidity to 20-25% relative humidity.  Already popular with new business jet deliveries, Cair is designed to improve sleep, reduce jetlag and tiredness and alleviate dehydration of the eyes, skin and linings of the mouth and nose.  “We are confident this is the beginning of a new era in premium-class cabins.  Dryness in aircraft cabins and the negative effects it causes to the human body is a known fact among airlines and frequent travellers,” highlighted Torbjörn Johansson, CTT’s President.

A much talked about newcomer this year was Optimares who turned heads with ‘Allison’, a 4.3m high ‘woman’ modelling an enlarged example of the company’s Premium Economy seat.  People are the “big” focus for the company’s product development which includes an emphasis on space, mood lighting, and on their Business Class seats, a privacy barrier built into the head rest.

For the retrofit market and in recognition that not all airlines can run to expensive new IFE systems, Manchester, UK-based Airline Services Ltd (ASL) had a busy stand demonstrating its 175 AeroScreen, a 17.5 inch HD-ready monitor, designed and developed in-house.  A relative newcomer to the IFE sector, ASL’s light-weight AeroScreen offers improved reliability, reduced weight and lower energy consumption, whilst delivering a screen image of remarkable clarity and brightness.  It also boasts a far wider viewing angle, (in excess of 160° horizontal and 130° vertical).  The screen is currently showcasing on board a bmi Boeing 757.

One innovation that drew considerable interest came from the team of Envisage Design, Holovis and Autodesk, three companies who have pooled their expertise to virtually create a 3D aircraft interior allowing developers to digitally design, visualise and simulate their idea so reducing the need to create physical prototypes, which, in turn, translates into cost savings.  Visitors viewed a futuristic airline seat by Envisage so demonstrating the ingenuity of the concept. www.aircraftinteriorsexpo.com See also AERBT 24 May “Disabled access improvement for airlines”. 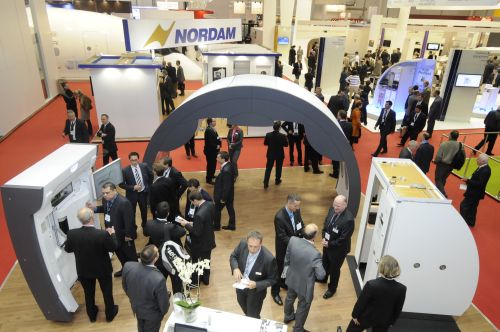