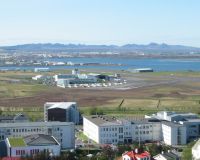 ASH appears to be no longer a problem affecting aircraft movements across the North Atlantic and Western Europe.  The Eyjafjallajakull volcano that caused air traffic chaos after erupting last month has gone dormant but it is too early to declare the eruption over, an official said on Monday.  Icelandic meteorological office geographer Sigthrudur Armannsdottir said the volcano, about 120 km southeast of the capital Reykjavik, was now showing only minimal signs of life.  "There is no ash coming up and no lava," she said.  "The volcano is dormant at the moment, but we are not ready to declare the eruption over."  Records show that the last similar occurrence was in 1821-1823. http://en.vedur.is