ON TOUR: The exclusive flyers meet at Geneva 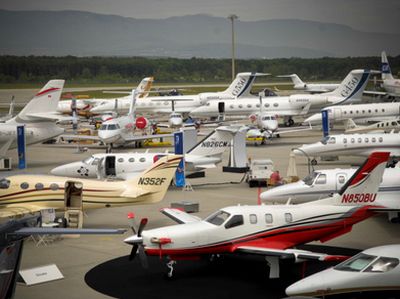 “Optimism” was the key word at EBACE, Europe’s premier business aviation show, as industry players gathered to celebrate its tenth anniversary in Geneva.  EBACE is always a popular show, drawing in high level visitors from Russia, the Balkans, the Middle East and Africa, plus this year, an increased number of visitors from Asia.   “It’s a customer-rich environment,” highlighted Gulfstream Senior VP Marketing Larry Flynn.

In a year where business aviation has not been immune from the economic freefall, the industry has come out fighting.  In his opening remarks EBAA President and CEO Brian Humphries reflected on what has been a remarkable decade of achievements with immeasurable progress made with policy holders.  Peter Bunce, President of the US General Aviation 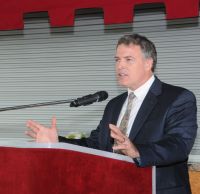 Manufacturers Association (GAMA), said that “EBACE is so much more than products and marketing.  It is about education and communicating with politicians.”

While the first 100 years of aviation were all about safety, the next 100 will be about the environment, EBACE delegates heard.  Maximising technology, progressing with air traffic management modernisation, the embracing of SESAR (the Single European Sky) and satellite positioning for data links are going to be so important in the future.  Other key issues are security, safety and how to successfully achieve carbon neutrality. 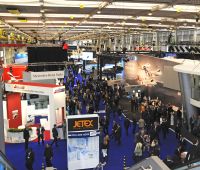 Embraer celebrated gaining European EASA approval of its Phenom 300 light jet, the culmination of a flight test programme that covered more than 1,200 hours’ test flying.  Oxford Airport based FlairJet, the first commercial operator of the Phenom 100 in Europe confirmed it will be the first European Phenom 300 operator too, from August.  Embraer, which brought its seven-strong family of business jets to EBACE, said it plans to deliver 120 more Phenoms, including 300 series, this year.  In the downturn it seems that the entry level jets from Cessna and Embraer have fared well as supporting figures highlighted by Eurocontrol traffic statistics showed.  (A total 400 – 300 Mustangs and 100 Phenom 100s have been delivered to date).

HondaJet also confirmed that its ‘large’ entry level jet is set to make its first flight in November this year.  Edwin Brenninkmeyer CEO of Oriens Advisors, an aviation consultancy focused on the complete ELJ value chain noted:  “There is a lot of opportunity for ELJs in Europe, but it’s crucial that manufacturers and operators continue to educate customers into understanding the value of these aircraft as serious business tools.” 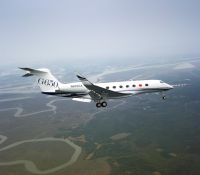 Gulfstream announced its brand new long range Gulfstream 650 recorded a top operating speed of mach 0.925 the weekend before the show opened, overtaking the record for fastest business jet from the Cessna Citation X.  At a press conference which kicked off with a video of the smaller G150 making its debut landing at London City Airport, CEO Joe Lombardo highlighted that the OEM did not cut back on any of its R and D spending during the crisis.  “We ended the year with more orders than cancellations,” he said, highlighting that for three years in a row international deliveries have out-performed those from the US market.  Over 60% of orders have been from the rest of the world.  Key growth markets he highlighted, echoing the view of the whole industry, are Brazil, China, India and Russia.

With a 30-strong fleet of Bombardier jets, leading European operator VistaJet announced that despite a very challenging year its revenues actually increased during 2009 by 20%, mirroring the same growth of 2008.  During the year it flew more than 7,250 movements and over 16,500 passengers.  It attributes its success to a consistency of high quality service throughout its operating bases in Europe, Middle East and Hong Kong.

Drawing considerable interest out on the static was the Airbus ACJ (G-NOAH) which recently entered service with Farnborough, UK-based Acropolis Aviation.  The Yves Pickardt of Alberto Pinto International Interior Design features a 19-seat VIP cabin, a real kitchen and a luxury bathroom with substantial shower.  Interiors were a strong theme this year  – which will continue next week at Reed Exhibitions’ Aircraft Interiors Expo in Hamburg.  Eurocopter showed off its special edition EC145 developed in collaboration with Mercedes Benz and inspired by the car manufacturer’s new ‘R’ range.  In yet another re-invention of the BAe 146/Avro RJ line BAE Systems Regional Aircraft announced a new Explorer version with Design Q featuring an outside deck linked to a freight door, while 328 Support Services in Germany said it had its first contract to design a VIP Dornier 328 turboprop. 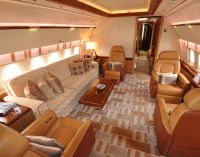 Aerospace Interiors made its show debut all the way from Auckland (New Zealand) to showcase their bespoke interior conversions VIP and head of state jets.  Through a newly announced partnership with Dubai-based Greenline Interiors, the company is out to target clients in the northern hemisphere.

Partnerships were the trend at EBACE as established and reputable names joined forces for sound commercial benefit.  ExecuJet and RUAG in Switzerland announced a strategic alliance to support joint customers with MRO activity.  Qatar-based Rizon Jet announced an alliance with new UK-based VIP charter company Oryx Jet where the two will work together to attract new FBO/MRO and charter business, respectively, at their new Biggin Hill base. (See AERBT On Tour 3 May).

And as the Russian market starts to gather momentum again JetAlliance of Austria announced it is to acquire 49% of Aeroflot Russian Airlines’ business aviation arm, Aeroflot Plus.  The organisation is planning to announce full details at a press conference at the end of this month.  Jetalliance, Cessna sales representative in 18 countries, including Russia, will run the business as Jetalliance East, becoming the first non-Russian company to fly Western-built aircraft on a Russian AOC.  It plans to base a new Cessna Citation CJ3 and Cessna Sovereign at Moscow’s Sheremetyevo Airport.

"The Middle Eastern market is beginning to think of EBACE as one of their shows,” commented Humphries.  Al Bateen Executive Airport from Abu Dhabi, the region’s first dedicated private jet airport, on schedule to open in September, had a strong presence. Farnborough Airport, UK-based Gama, a long established charter and management group, took the opportunity to promote its recently awarded UAE Air Operators’ Certificate and status as the only business aviation group in the world to simultaneously hold operating licences in Europe, North America, the Middle East and Bermuda.

Addressing a session on Aviation and the Environment Where Now? Brian Humphries stressed that the forthcoming EU Emissions trading scheme is both a concern and ‘a bit of a mess,’ with 98% of effort going into 2% of the problem.  Business jets account for 7% of traffic, but just 0.04% of emissions, he said, noting the biggest challenge is developing an environment blueprint for the industry that is cost-effective and technically achievable.  Biofuels are not so viable as proponents believe, suggested Paul Bogers, Aviation Technology Manager from Shell, claiming the raw cost of the foodstock is greater than the cost of the end product (kerosene).  “Press releases are cheap, but biofuels are expensive,” he concluded.