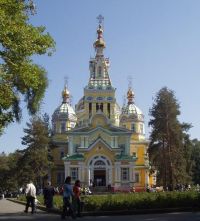 AIR ASTANA, the flag carrier of the Republic of Kazakhstan, has celebrated its eighth anniversary announcing plans to expand its Central Asia hub at Almaty, the country’s largest city.  New services will be launched to Urumchi in western China; Dushanbe, capital of Tajikistan and Tashkent, capital of Uzbekistan, during the second half of 2010.  Regional services already operate from Almaty to Baku, capital of Azerbaijan; Bishkek, capital of Kyrgyzstan; and Novosibirsk in southern Russia.  Additional new routes to other cities in southern Russia, including Omsk and Yekatenburg, are also under consideration.  A fleet of Embraer E-190 airliners have been selected to specifically operate on Air Astana’s expanding Central Asia network, with the first of three aircraft scheduled for delivery in early 2011.  Airbus A320 family aircraft will operate these services in the interim.  The airline has a twice weekly non-stop service between Heathrow and Almaty. www.airastana.com