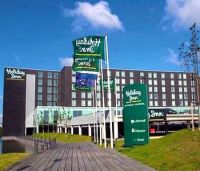 AMSTERDAM AIRPORT’S Holiday Inn hotel has new owners, Park Plaza, according to reports coming from Holland.  Situated just one stop on the Metro from the airport the 342-room hotel has had a less than distinguished history.  Built in 2006, it initially remained unopened before being unveiled under the IHG brand.  Last year it was declared bankrupt and kept open by the bank lender who also undertook a refurbishment.  Park Plaza has three other hotels in the Amsterdam area. www.parkplaza.com