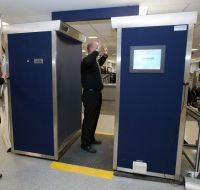 MANCHESTER AIRPORT’S TERMINAL 2 will become the first in Europe to replace hand searching with body scanners as part of the security process after airport bosses secured a unique agreement from the European Commission.  The move follows a successful trial of a body scanner in Terminal 2 that began in October 2009 and which became a compulsory part of secondary security screening in February 2010.  The scanners will now be deployed as part of a 12-month trial, replacing the second walk through metal detector.  The airport is aiming to demonstrate to customers that they need not remove their coats, jackets and shoes, thus improving their journey through the security process.  The airport has been trialling a new SMART lane layout and this will complement the use of the scanners and hopefully improve the flow rate. www.manchesterairport.co.uk