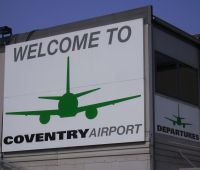 COVENTRY AIRPORT is to re-open as a licensed operation after Sir Peter Rigby’s Patriot Aviation Group agreed a takeover with the ultimate landowner Coventry City Council.  The deal was welcomed by the airport tenants including Air Atlantique and West Atlantic, the cargo airline.

Alan Durham, Director of Policy at the Coventry and Warwickshire Chamber of Commerce, said: “The airport had an uncertain future and we are pleased that any doubts about its existence appear to have been eliminated thanks to this deal.  The Chamber has been keen to see the site retained for use as an airport and we are delighted that it now seems to have a more certain future.  It is good news for businesses in the region in general and for those who directly deal with the airport and depend on its existence.”

After announcing that he was the new owner of Coventry Airport, Sir Peter said he would be focusing on making the airport fully operational again, with plans in the future to return to commercial flights. www.coventryairport.co.uk