London’s own Salon Privé, held in the grounds of the Royal Hospital Chelsea, also the home of the famous Flower Show, was a tremendous success, 16,000 people passing through in its three days.

BTN has already reported on the aviation part of the experience Salon Privé flies 25 April and here we take a look at the car side, although motor cycles did feature.

For those with money (but not Russian or with actual roubles) one could have ventured to Chelsea and actually purchased an entry in the Concours de Vente featuring 50 of the finest collectors’ cars.

This first day of the capital’s new automotive event got off to a scintillating start, with the global debut of the Healey by Caton, an ultra-exclusive reincarnation of the iconic Austin-Healey 100 sports car. Fusing traditional craftsmanship with original equipment manufacturer-grade (OEM) design and engineering, it promises an immersive, intoxicating and emotional automotive experience. Said to be the driver’s car for the modern age, the all-new luxury British brand Caton brings the revered Austin-Healey up to date while still protecting the ethos of the 1950’s original. 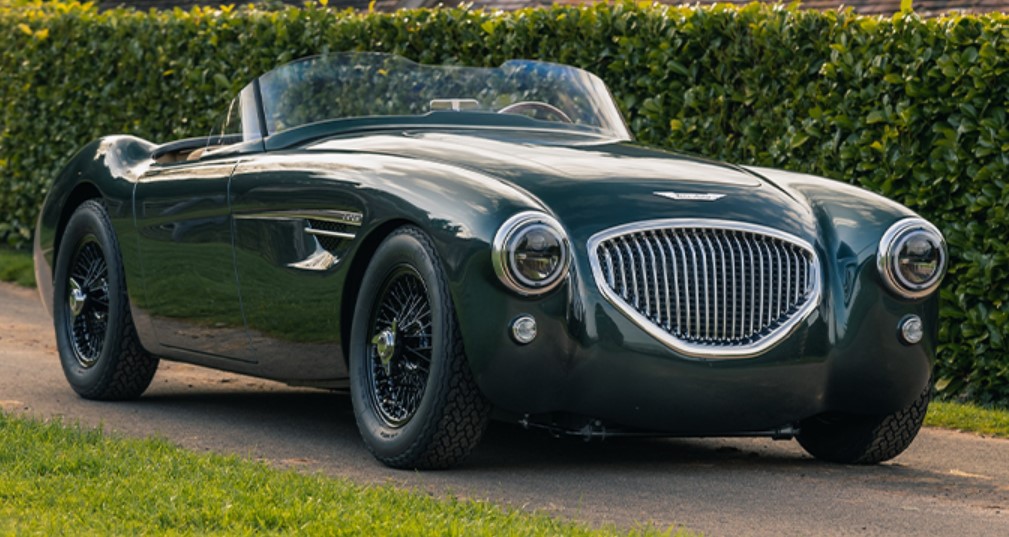 Aston Martin gave the Aston Martin DBX707, the world’s most powerful luxury SUV, its UK show debut.  A massive SUV like no other, it elevates Aston Martin to the pinnacle of the segment with a unique combination of blistering performance, supreme dynamics and unmistakable style. Also on display was one of the two Aston Martin DBS GT Zagato in existence, as well as the Valkyrie – the marque’s first ever hypercar.

H.R. Owen Ferrari bought two Italian thoroughbreds to the event for their UK static debuts, with the Ferrari Daytona SP3 joining the Ferrari 296 GTB on display. Already crowned as one of the most beautiful cars of its generation, the Ferrari Daytona SP3 is the third in the limited edition Icona series. Paying homage to the mid-rear-engined Ferrari V12 sports prototypes that earned the famous marque its unparalleled motor sport status, it was first shown last November, as part of the 2021 Ferrari Finali Mondiali, but has not been seen in public since. Also on show was a Tailor Made Roma, showcasing Ferrari’s exclusive programme for customers who want to create an unmistakable, one-of-a-kind vehicle. 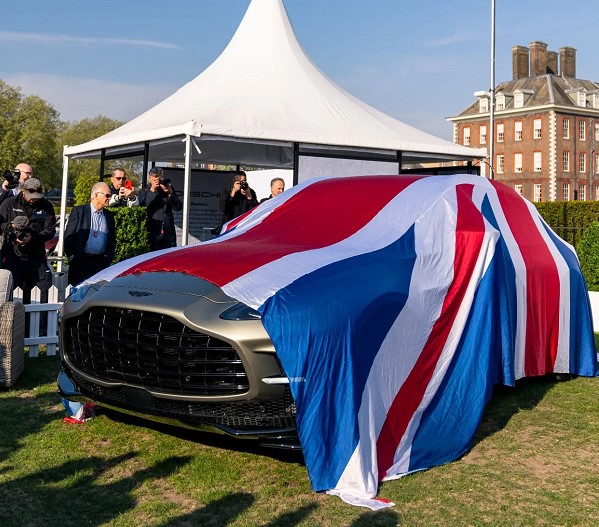 An advanced evolution of the cars previously seen, and the lightest hybrid hypercar on the market, the Tushek TS900 Apex was revealed by the company’s founder Aljosa Tushek. Employing a new and patented electric drive system to achieve perfect parity, the car possesses a power-to-weight ratio of one metric horsepower to one kilogram of mass (1:1) a landmark achievement. Tushek joins an elite handful of vaunted marques to have achieved such an engineering breakthrough.

That most British of marques, the Morgan Motor Company gave the new Super 3 its UK show debut at Salon Privé London, as the Malvern-based manufacturer showcased its entire range. Recently revealed to the press, the Super 3 continues the 113-year legacy of three-wheeled Morgan vehicles yet introduces a new product family with a design language inspired by the Jet Age.  It’s not for everyone but will fit nicely in the streets of the Royal Borough of Kensington and Chelsea.

Making its UK show debut, Alpine unveiled the New A110 range which has been updated with three distinct new versions, uprated performance, and more equipment than ever before. Faithful to Alpine’s timeless principles of lightness, compactness and agility, with promise of driving pleasure, the brand is steeped in motorsport heritage which is fully embraced in the modern era – with representations across Formula 1, World Endurance and Rally Competitions.

The new Range Rover SV, the flagship of Land Rover’s pinnacle luxury vehicle, made its UK event debut, mixing modernity and aesthetic grace to create an exquisite interpretation of the iconic SUV. The first vehicle to wear the distinctive ceramic SV roundel, it represents the apex of design and engineering expertise from Land Rover’s in-house Special Vehicle Operations team and provides customers with a new level of craftsmanship as well as greater functionality. 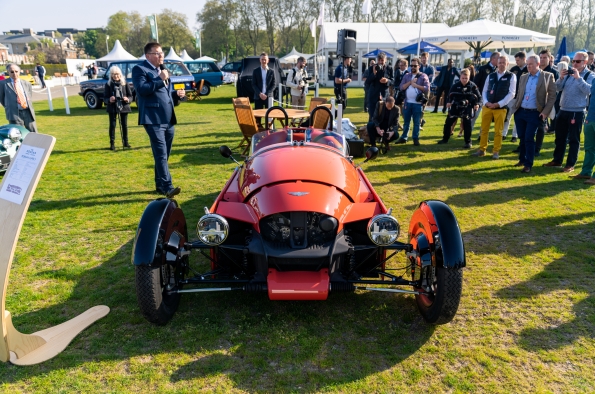 Genesis unveiled its first dedicated electric platform-based vehicle at Royal Hospital Chelsea, the GV60. Building on the brand’s philosophy of setting a new standard in customer service, paired with luxury design, the GV60 delivers the technology of a high-performance electric car in the form of a sleek and athletic coupé crossover utility vehicle. BTN has a four-wheel drive traditional petrol driven GV80 under road test.  Look out for a review in the next motoring edition of BTN 6 June.

As the oldest car making its debut, 81 years after it was first conceived, the long-lost Alfa Romeo 12C prototype was revealed, alongside a brand-new book telling the fascinating story of the pre-war racer. The historically significant Alfa Romeo, which connects three of the world’s greatest automotive marques (Alfa Romeo, Ferrari and Porsche) was completed decades after the project was abandoned, with its major components reunited and the car restored. The new book, The Missing Link? is the first from Progetto 33, the publishing house founded by Stefano Martinoli, owner of the 12C Prototipo. 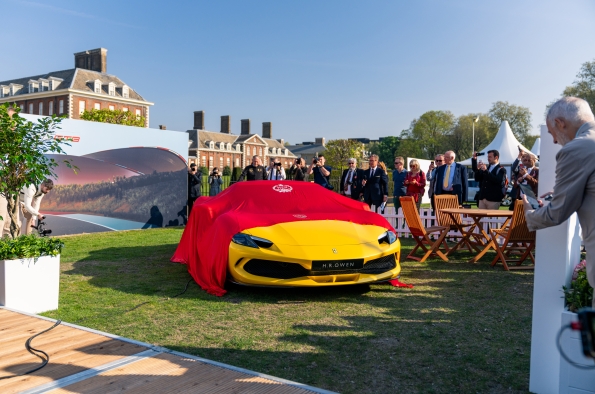 The Rolls-Royce Black Badge Ghost made its première debuting the dark side of Post Opulent design. With a drivetrain and chassis re-engineered for more urgent performance, the 6.75-litre V12 engine now delivers increased power (600PS) and torque (900NM). Darker in aesthetic, more urgent in personality and dramatic in material treatment, the curated collection on show at Salon Privé London premieres striking Turchese Leather and Technical Carbon veneer as well as a bespoke alloy wheel introduced in Black Badge house style with carbon fibre barrel. It is a big motor car.

At the heart of the event is the unique Concours de Vente, a ground-breaking concept featuring 50 of the finest automotive classics – all of which are for sale during the three-day event. With over 20 leading specialists competing, was a display like no other.

Vintage Bentley presented the famed Barnato-Hassan Bentley racer, one of the fastest cars to lap the Brooklands’ Outer Circuit, while Joe Macari offered a 1972 Ferrari 365 GTS/4 Daytona Spyder. The 68th of 121 official cars produced by the Scaglietti, it was delivered to the United States in December 1972.

Fiskens brought an original 1936 Delahaye 135 CS to the Royal Hospital Chelsea for the Concours – believed to be the only example still with its original Electron gearbox, this meticulously cared for car retains its original coachwork. Tom Hartley presented a rare 1960 Ferrari 250 GT Pinin Farina Cabriolet – one of only 200 Series II examples to leave the Maranello factory – which has been awarded Ferrari Classiche Certification. 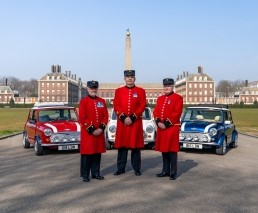 DK Engineering took part in the Concours de Vente with the unique AC MA-200 prototype – restored to ‘as new’ specification.  It has won numerous accolades, including Best in Class award at the Amelia Island Concours d’Elegance. Collecting Cars entered a 1987 Porsche 959, the world's fastest street-legal production car when introduced. Originally developed for the Group B World Rally Championship, this example was delivered new to Germany in 1990 and currently shows just over 80,000km on the clock.