It was promoted as a National Day of Action, and certainly was last Wednesday (23 June).  And the next day the Government listened.

From Aberdeen to Southend workers involved in the travel industry turned out in their droves making their point to media, and hence the public, with extensive coverage in the printed media, radio and TV.

Also much involved was Baroness Foster of Oxton, better known as Jackie Foster, a one-time BA hostess and a founder of Cabin Crew 89, a one time MEP best described as a Euro Sceptic, but much involved with aviation matters.

Essentially the gatherings were for what might loosely be termed ‘workers’ ranging from former high street travel agency staff, to redundant airline Captains, all badly affected by what was termed “an abatement of the industry” by Mark Tanzer, Chief Executive of ABTA, who put together the well behaved protest.  Brian Strutton, of British Airline Pilots Association (BALPA),. led for the flight deck staff whilst the travel trade itself was represented at CEO level by amongst others Joss Croft (UKinbound), Derek Jones, Kuoni and Julia Lo Bue-Said (Advantage Travel). The aviation sector was led by Tim Alderslade (Airlines UK), Dale Keller (BAR UK) and Simon McNamara (IATA)

Clive Wratten, CEO of the Business Travel Association (BTA) summed it up: “Today’s day of action highlights the dire straits of our industry. The travel sector remains in lockdown as the rest of the country opens-up. Business travel is essential for the UK economy and our ability to trade on the international stage. The Government must provide targeted support and extend the green list at its next review. 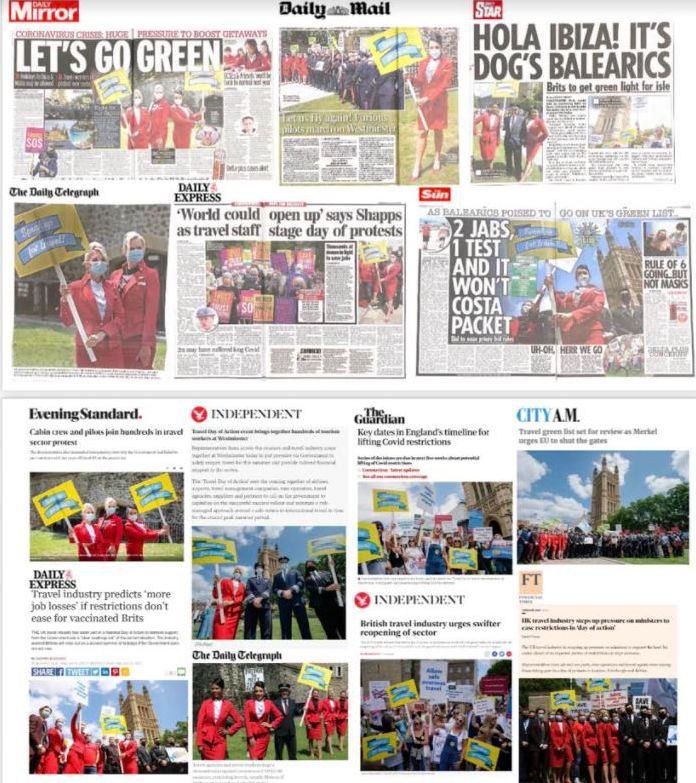 And amazing day. But did it do any good?

As someone who came to Westminster all I can say is well done everyone for a perfect demonstration of unity in these trouble times. And also for the politicians who turned out. The coverage was amazing.