Back in September 2020 BTN described the Alfa Romeo Giulia Quadrifoglio as “a true Italian Express”, albeit an expensive one coming at around £75k. Here is an alternative, less pricey, but still distinctive Alfa. 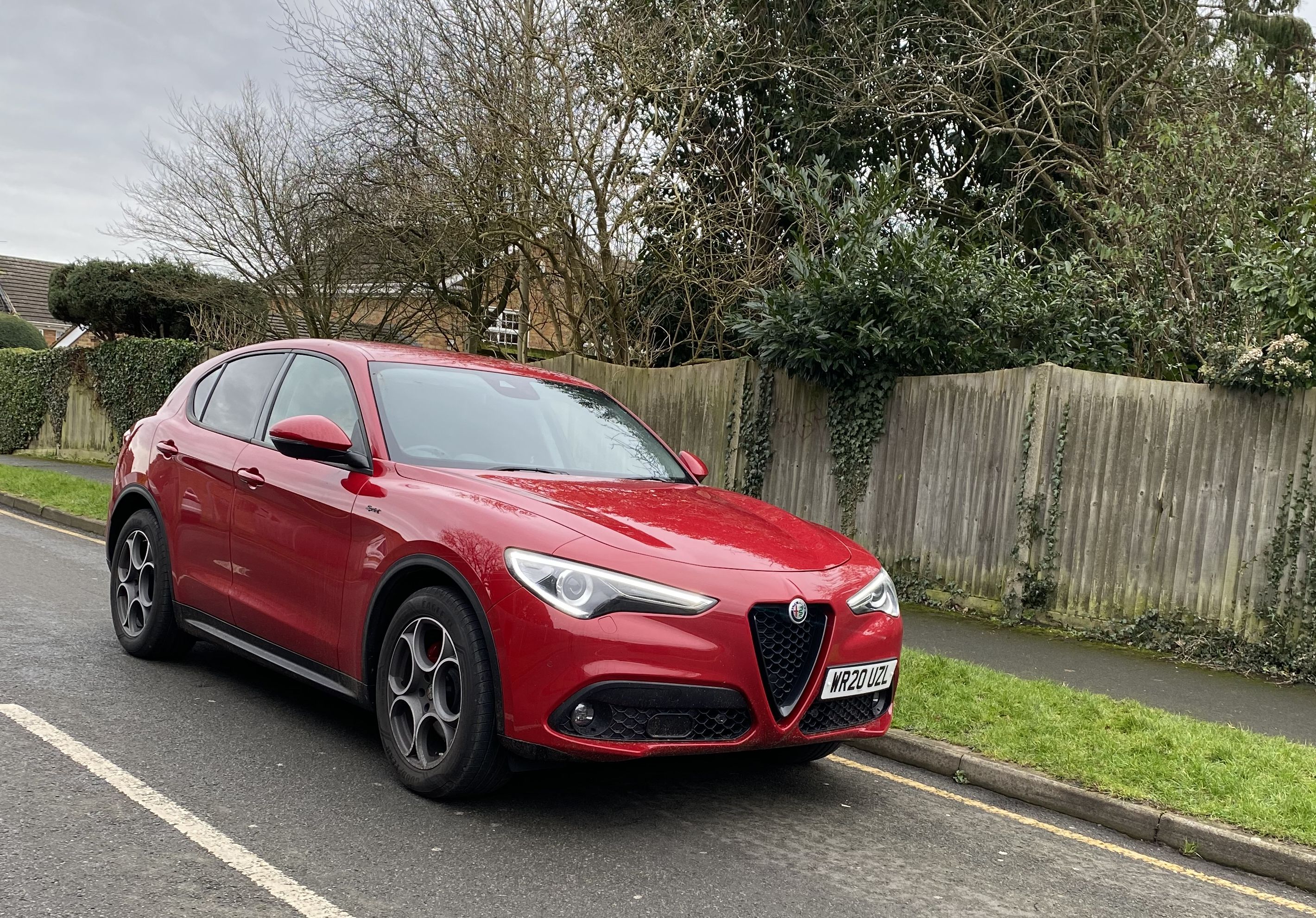 Keen readers may have noticed we used the term ‘Stelvio’ in the 12 February BTN motoring issue. The Stelvio pass on the Swiss border of Italy has 48 hairpins.  No chance to try with the Covid lockdown but this car, for a big SUV saloon, should be able to handle them with ease.

The press car was bright red, as it should be for an Alfa.  It is very distinctive and can be easily picked out in a car park.  There is no need to use the ‘parked car’ facility on your mobile’s ‘Google Map’.

Priced at £47,515 on the road it is into a different market although also offering five comfortable leather seats, the front ones electrically heated.  There are less expensive models starting from around £37k.  One drawback is that with current UK vehicle tax laws versions over £40,000 cost much more in road tax for the first five years, jumping from £140 to £450 per annum. 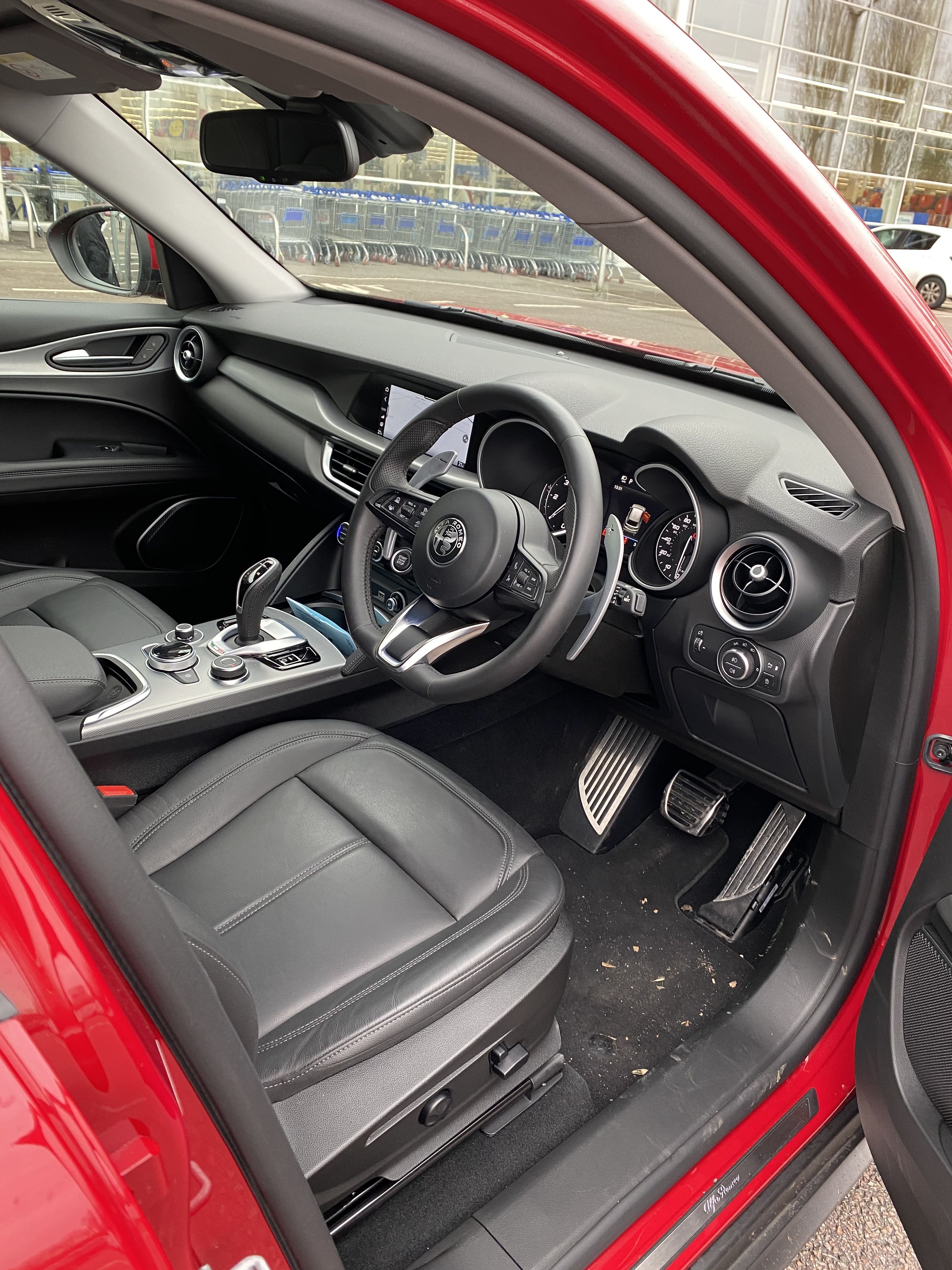 The Stelvio is based on the same platform as the Alfa Romeo Giulia saloon, but you sit almost 7inch higher, looking down on all around.  A petrol version offers Alfa’s Q4 all-wheel-drive system which is rear drive in normal conditions, up to 50% of the power reactively sent frontwards in low-grip conditions.

As an SUV the Stelvio has to be practical and it certainly is at the rear end with a standard-fit electric tailgate and well over one metre of space before you reach the second row of seats which split into three.  The two outside ones do not fold fully down, but the smaller centre cushion does separately, which allows for a long item, such as a spade, to be easily loaded into the car.  With 19inch wheels and excellent ground clearance it is a good off-the-road vehicle and has a fine profile, one that fits in nicely with its Italian heritage.

As I have noted before with my reports the problem with a modern road test is that it takes more than the allotted seven days to learn all intricacies of the vehicle.

It was easy in the ‘old days’.  Put the key in the slot and perhaps ask the delivery driver where to find reverse.  Not so these days.  Possibly only a fob and no handbrake as such.  Learning your way around the Stelvio was easier than most.

Some of the ‘toys’ are very good, especially the 8.8inch central display, touchscreen, with widgets which can be dragged and dropped to create a fully customisable homepage, in which each of the vehicle's functions becomes an app. Horizontal scrolling calls up the access screens for Alfa DNA, radio, media, smartphone, navigation, climate control, connected services and the latest advance driver assistance systems (ADAS). The driver can choose between the updated rotary knob or the touchscreen to control the new infotainment. 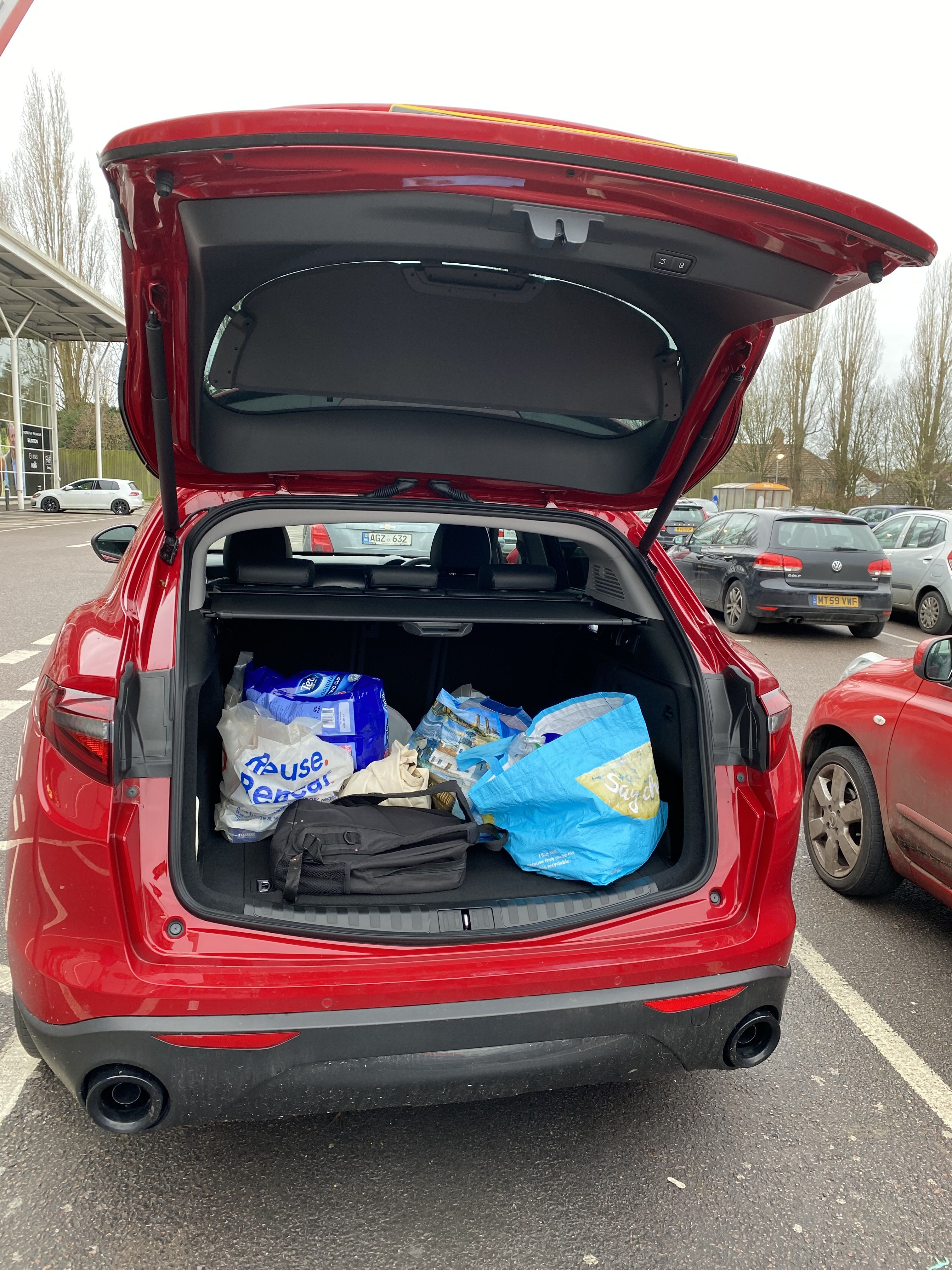 For the most part modern cars come pretty comprehensively equipped (except for Porsche in which everything is an extra, adding £20k to an £80k car). The Stelvio Sprint includes as standard the central display already noted, an 8-speaker audio system, electrochromic rear-view mirror, Bi-Xenon headlights and ambient LED lighting – front and rear.  Cruise control is included and a lane keeping bleeper which can be switched off, likewise a blind spot bleeper.

Another function called ‘My Remote’ enables control of several vehicle functions linking to a Smartphone offering speed and area limits.  ‘My Navigation’ comprises applications for remote search for destination and Points of Interest (POI) and real-time traffic, weather and speed camera alerts. There is also ‘My Car’ a sort of electronic service manual ‘My Wi-Fi’, self-explanatory, and ‘My Theft Assistance’, which alerts the owner of any attempt to steal the car. It is all included.

It is called the Sprint and nicely badged accordingly. Even in mid-range form, the Stelvio is agile, poised and grippy for a mid-sized SUV. It has got what can be best described as a well supressed low-speed ride.  It does however handle as a car with a sporty soul, which comes into its own off the rather boring motorways where it quietly does its job in the same manner as many other comparable mid-range saloons.

If you are looking for a characteristic five-seat SUV with pace and a pleasure to drive, the Alfa Romeo Stelvio Sprint might be the answer.  There are plenty of colour options but to my mind Italian Red is the best.