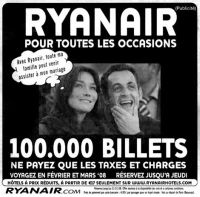 AIR FRANCE has accused Ryanair of receiving “financial aid” from French regional airports.  It has issued a press release stating “Ryanair's agreement to serve these airports is conditional on the airport authorities' granting aid to it.  Such measures, taking the form of reduced airport taxes, preferential ground handling rates at certain airports or marketing aid, have been implemented by at least 25 French regional airports.  In addition to the fact that they were never officially announced before they were implemented, these measures are contrary to European regulations.”  The complaint has gone to Brussels, Ryanair has denied the charges.  It is within the airports’ rights to offer initiatives in order to attract airlines.  But for how much and for how long is the question?  Ryanair has in the past been successful in battling these kind of allegations, Charleroi for example, but this time it is the French national airline complaining about French nationals! www.ryanair.com www.airfrance.com