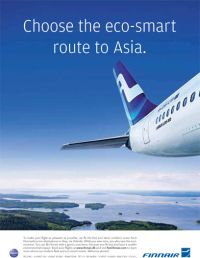 FINNAIR is heavily promoting its connections to the Far East from Manchester via Helsinki with its twice daily service.  From Heathrow it is four times daily.  Last week the airline hosted a gathering at Manchester’s Radisson Edwardian hotel essentially to enlighten north west enterprises on the swiftly developing Asian economies.  Christer Haglund, Senior Vice-President of Communications of Finnair, unveiled the airline's new "Local Hero" campaign which features Imran Hakim, the highly successful Dragons' Den entrepreneur and adviser to the UK government.  Other speakers at the working breakfast included Philomena Chen, Head of Asia-Pacific Development at UKTI NW and Andrew Harrison, Commercial Director of Manchester Airport.  Finnair calls itself “Manchester's Fast Airline to Asia” offering some of the best transit and flight times to nine cities in China, India, Japan, South Korea and Thailand.  The airline points out that there is just time for a quick sauna in Helsinki’s new executive facility, in either direction.  After all it is Finland’s most famous export. www.finnairgroup.com