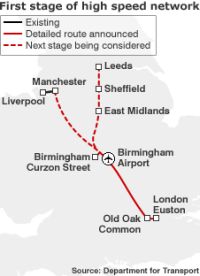 250 MPH TRAINS are one of the main features of new rail plans announced by Transport Secretary Lord Adonis.  The government is recommending a route for a new line between London and Birmingham with a future extension to northern England and Scotland.  The public will be consulted on the proposed route, with work unlikely to start until 2017 at the earliest.  The Conservatives largely agree but say the project should start in 2015.  The London terminus would be a re-built Euston and Curzon Street is expected to be the Birmingham city centre station.  There would be interchange stations with Crossrail west of Paddington and near Birmingham airport.  The preferred route will run out through north-west London, skirting to the south-west of Aylesbury, then to the west of Buckingham and the east of Brackley and Banbury, before passing between Leamington Spa and Coventry and the eastern side of Birmingham.  A future extension is being considered to northern England, which would be developed as a Y shape with one branch to Sheffield and Leeds and the other to Liverpool and Manchester. www.trains.co.uk