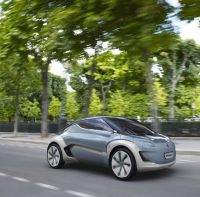 AVIS goes electric, or at least it plans to in 2011.  In a partnership with Renault the giant international car hire organisation is to offer electric cars to customers.  From 2011, Renault will progressively roll out four electric vehicles.  These include two derivatives of internal-combustion vehicles the Renault Fluence Z.E., an electric version of Fluence which will initially be available in Israel and Europe.  The Kangoo Express Z.E. is intended primarily for fleet and business use.  In addition, two vehicles will be available in EV form only, a car derived from the Twizy ZE Concept, a car for motoring in built-up areas.  The  fourth vehicle will take its inspiration from Zoe ZE Concept and is scheduled to be released at the beginning of 2012.  It will be a particularly versatile vehicle intended for every day motoring in and around cities. www.avis.com