British Airways and the strike 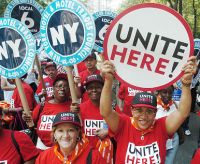 BRITISH AIRWAYS watchers should note that this looks like a critical week in its dispute with the Unite union.   The law dictates that if the strike does not go ahead by 22 March the union will have to re-ballot.  However it also says that seven days warning is required for a strike.  This means in effect that if the union has not declared a strike by 15 March (next Monday) they will again have to seek the views of members.  The whole argument is about BA introducing cost cutting procedures alien to the union's view.  Unite has presented to the airline a number of alternatives in a last ditch effort to prevent strike action.  Talks were due to continue today (Monday 8 March). www.ba.com www.unitetheunion.com