Regular readers will be aware that BTN over the last few months has concentrated on UK places to visit.  We are being very practical.  Overseas travel has been limited, mainly by the lack of government support for the airline industry during the Covid-19 crisis.

For BTN of 9 November, we highlighted VisitEngland and its efforts in this area and have now updated adding visitor numbers for towns, free attractions, and paid for places.  Do take another look.

Our mount for this trip was an Alfa Giulia Quadrifoglio, wonderful for galloping across the Moors, but a bit heavy when it came to petrol.

York is one of our favourite cities coming 14th in the rankings.  It is easy to get to via London North Eastern Railway (LNER) (formerly Virgin Trains) in less than 2hr, or by road via the M1 (don’t use the A1) slightly more than 200 miles and 4hr. 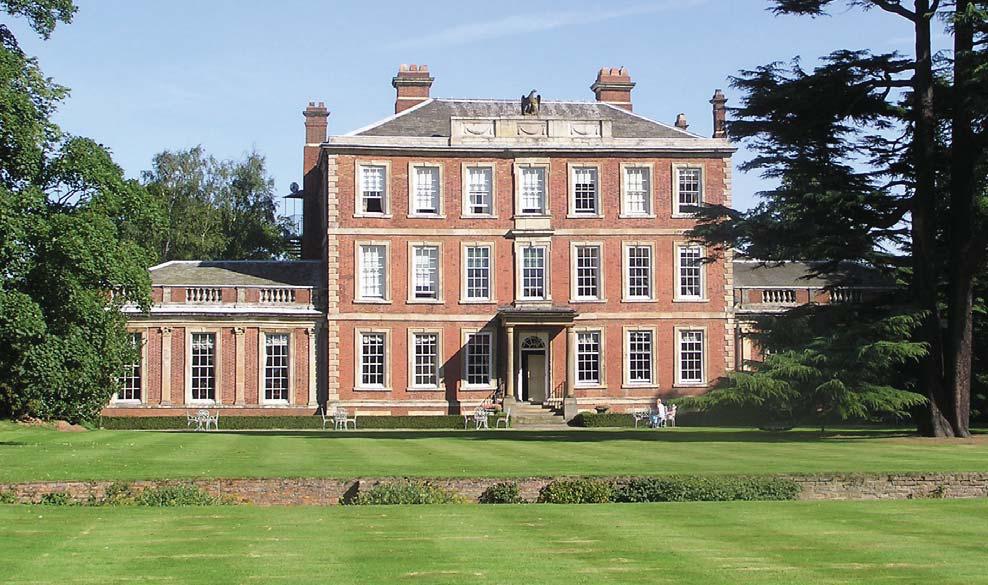 This time we chose to stay at Middlethorpe, a National Trust owned hotel just over two miles from the city via the Bishopthorpe Road, 10min by car or taxi (there is plenty of parking spaces but it can get busy) or the bus, which runs every 30min and is part of the Freedom Pass scheme.

Let us start with the negatives.  Whilst the three-storey hotel will happily accommodate those with disabilities there is no proper lift.  What is calls a lift is a butlers hoist dumb waiter with just enough room for two, but not 2m apart.  It suffices.

The main house bedrooms are beautifully furnished, with antiques and fine paintings, and enjoy views over the south lawn or beech avenue.  But no dogs please.  These can be accommodated in the four Garden Suites or what is termed “The Cottage”. All the rooms are air conditioned, have excellent courtesy wi-fi, plasma TV screen, and a coffee machine.  Sizes to suit one’s pocket but even the smaller rooms were more than adequate.  This is a classic old-fashioned hotel but with all the modern necessities.

Middlethorpe offers the best of both worlds, a pretty 29-room country house, 20 acres of beautiful gardens in which to wander around, and a spa with all the treatments, up to date gym and 15m indoor swimming pool.

The house was originally built in 1699–1701 for Thomas Barlow, a prosperous master cutler who bought the Middlethorpe estate in 1698 as a bid to establish himself as a country gentleman.

For the next 200 years it passed on within the Barlow family and a descendant was Fanny Wilkinson, said to be the first professional female landscape designer in Britain with Middlethorpe gardens as her inspiration.  At one time it was a girls’ boarding school and even a nightclub. 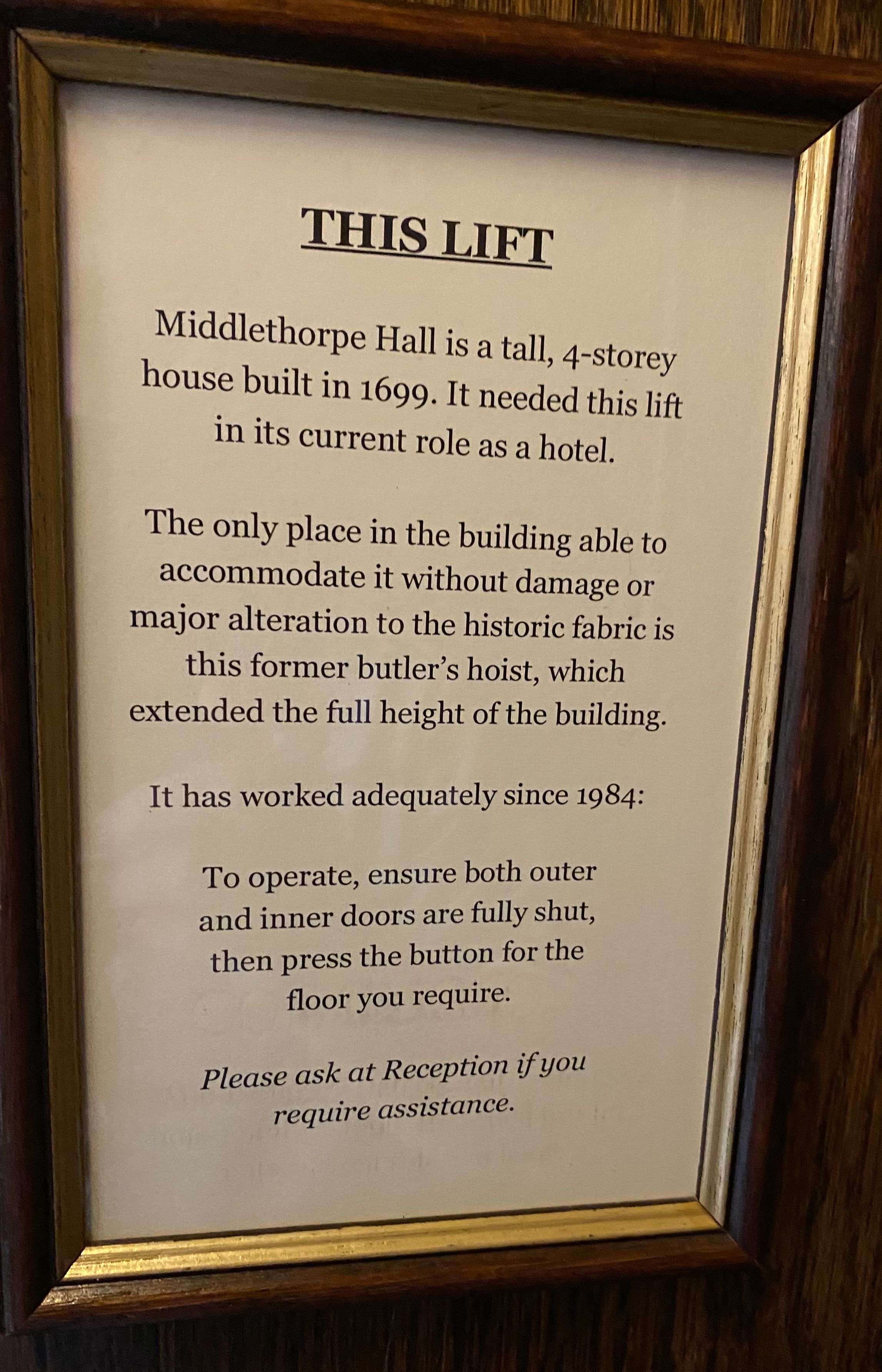 In 1979 it was acquired by Historic House Hotels which effectively became the National Trust hotel division in 2008 joining  Bodysgallen Hall in North Wales,  Hartwell House Hotel  near Aylesbury,  Hunter's Inn North Devon and  The Causeway Hotel in Northern Ireland.

The public areas of the hotel are all on the ground floor overlooking the gardens with the airy lounge a fine place for an English traditional afternoon tea impeccably presented with just the right balance of neatly cut finger sandwiches and delightful pastries. Pre-dinner cocktails are served here to, and then it is a short walk to one of two panelled dining rooms, with discreet lighting, and further rooms to dine in for small groups.

There is a choice of a gourmet tasting menu (£75), or a bill of fare (£49 three courses or £39 for two). The vegetables for the most part are home grown in the kitchen garden.  At £38 the Sunday lunch was particularly good value, a slow partaking with dusk already falling.  It was salmon as a starter, then roast sirloin and Yorkshire pudding plus a selection of four British cheeses.  Plenty of choice for each course.

Why stay in crowded York when Middlethorpe is only a (long) walk away past the famous race course.  The property, with the extensive gardens, is ideal for weddings and other parties, and business conferences, but is limited for 59 if a sit-down meal is required. 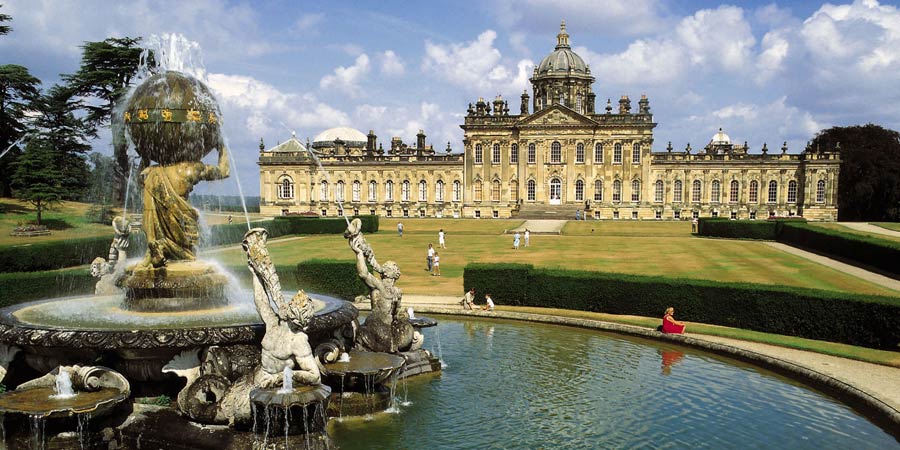 The home of the Howard family for over 300 years Castle Howard is not a castle but a magnificent stately home originally designed by John Vanbrugh, he of Blenheim Palace, around 1700, and 100 years in the making.

From a driving point of view, it was an easy run along the delightful A64.  It is 20 miles from Middlethorpe and a little less from York itself.

The Castle Howard Estate, features over 200 listed buildings and monuments, is situated within the Howardian Hills, a designated Area of Outstanding Natural Beauty.  It covers approximately 8,800 acres (3,561 ha), comprising 6,100 acres of farmland, 2,100 acres of woodland and 600 acres of parkland.

On a sunny day, with the house open, the full opening time is needed to take it all in. 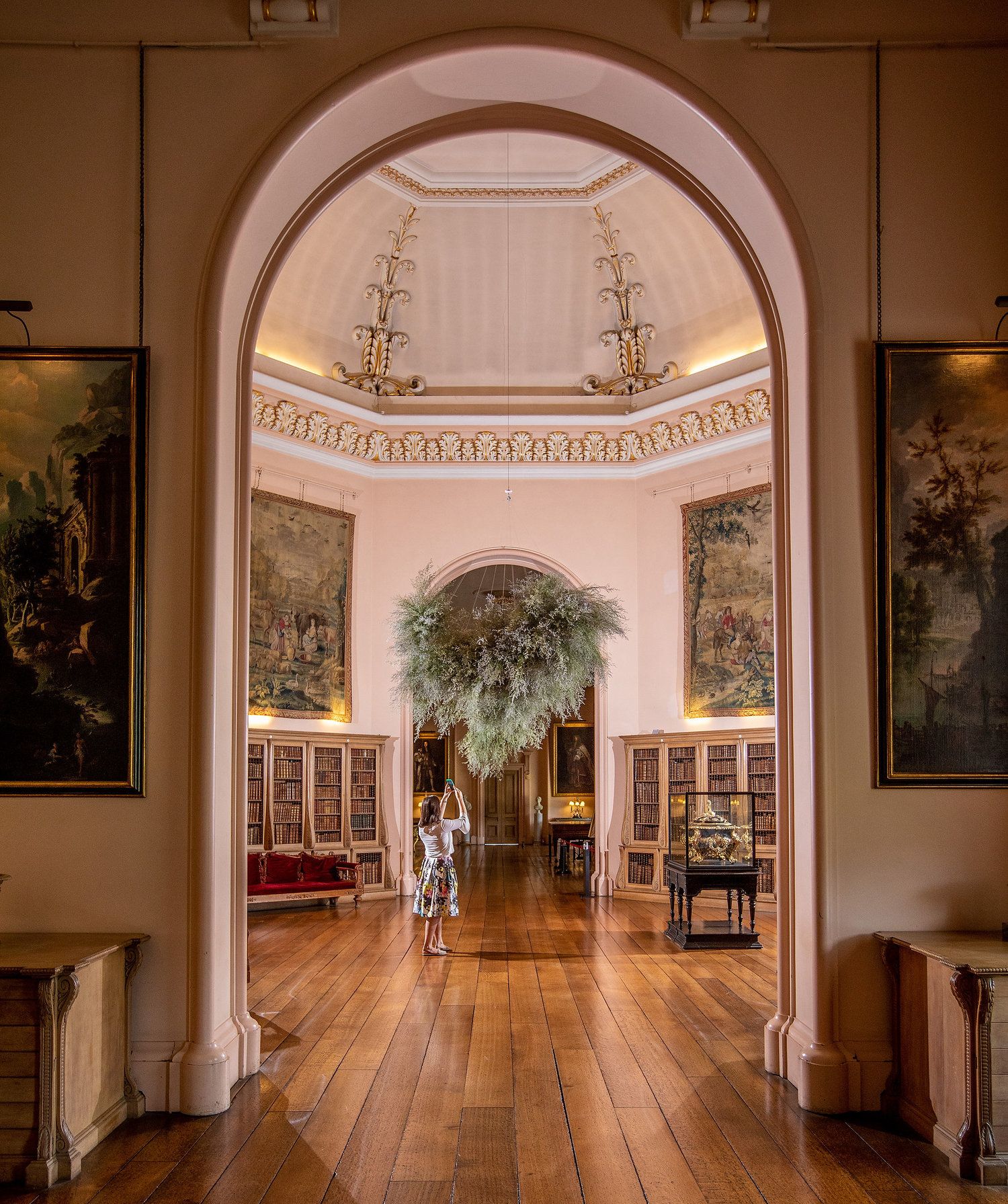 Parking was free and the Farm Shop, Garden Centre and take away Coffee Shop were open on what is best described as the landside vista and seemingly popular with locals who had probably visited the estate many times previously.

Castle Howard is one of the largest country houses in England, with a total of 145 rooms but sadly, the results of a fire in 1940, the South East Wing remains a shell, although it has been restored externally and an exhibition tells of the of the extraordinary transformation of the derelict rooms into film sets for both the 1981 and 2008 versions of Brideshead Revisited.

Following some routine maintenance and cleaning, the Atlas Fountain is back up and running. The South Parterre at Castle Howard has been dominated by this massive piece of Victorian sculpture and engineering for nearly 170 years. To this day, visitors enjoy the spectacle of multiple water jets along with the pleasing sounds of splashing water.

Pre-booking was supposed to be the order of the day, but the entrance formalities were very relaxed although the “check & chase” facilities were in place.  From the entry point to the mansion is just under half a mile, downhill.  Including a diversion for the fountain it seemed further going back up the slope, although courtesy buggies did prowl about.

During the lockdown the Adventure Playground, remains open and the Boathouse Café continues as a take away with a wood-fired pizza oven and marshmallow toasting at weekends. A stretch tent canopy also remains in place so that there’s some open air, covered seating available for rainy days. 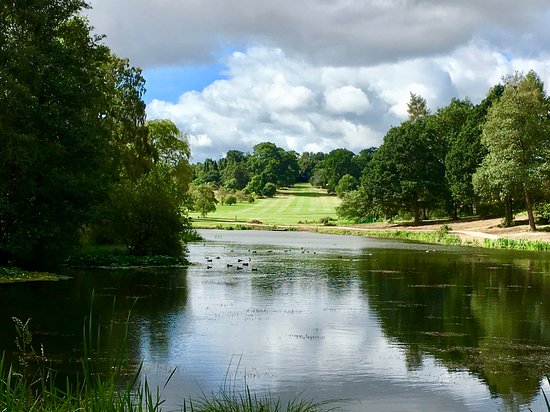 A few hundred yards from the front gate is The Yorkshire Arboretum, run by the Castle Howard Arboretum Trust in conjunction with Royal Botanic Gardens Kew.  It is a glorious 120-acre garden of trees from around the world set in a stunning landscape of parkland, lakes and ponds.  We did not manage a visit during our short trip but the plan is to come back to Castle Howard summer 2021, take in the mansion itself, and also look into the Arboretum.

With the main house closed it was a quick decision to cut our losses and motor north across to the Moors National Park Centre, with a fish and chip lunch in Whitby.  A spectacular drive along deserted moorland roads.  I plan to report next week.

Both the visits were under Covid-19 rules, which meant a one-way system for Middlethorpe, and as noted, no entry for the Castle Howard building itself.  Each were exemplary in the way guests and visitors were looked after and easily met the rules.

A swim. Great Sunday lunch. And then a quiet stroll in the grounds.

I used the elevator. The girlfriend liked it too.