Fancy a very, very, fast and aggressive sports saloon with just about room for five, a true Italian Express.  The Alfa Romeo Giulia Quadrifoglio could be just that car. 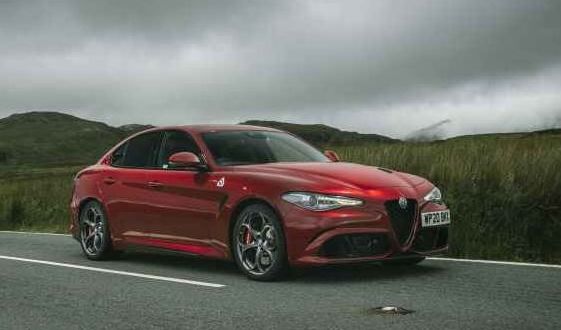 Alfa is making something of a comeback in the UK after some years of losing its identity in the British market.

To put in perspective the Lazio-based manufacturer is part of the Fiat Chrysler Group whose other Italian brands include Abarth, Fiat, Lancia, Maserati. In 2016 Ferrari was spun off, but engine wise this flyer has much input from its former partner, in charge Philippe Krief, previously a very senior engineer at Maranello, the home of the World’s oldest Formula 1 team.ri.

When it comes to the traffic light grid the Quadrifoglio is up with the best of them,  the quoted 0-60 in just 3.9sec, is quicker than the Jaguar XJR (4.6sec) although well behind the Tesla S astonishing 2.4sec.  The Audi, BMW and Mercedes competitors are all in the 4sec segment and for the most part as much as £10,000 more expensive.  As another comparison the Lexus UX, the subject of a BTN road test in February we thought quick but its 0-60 was only 8.4sec, sleepy by comparison. 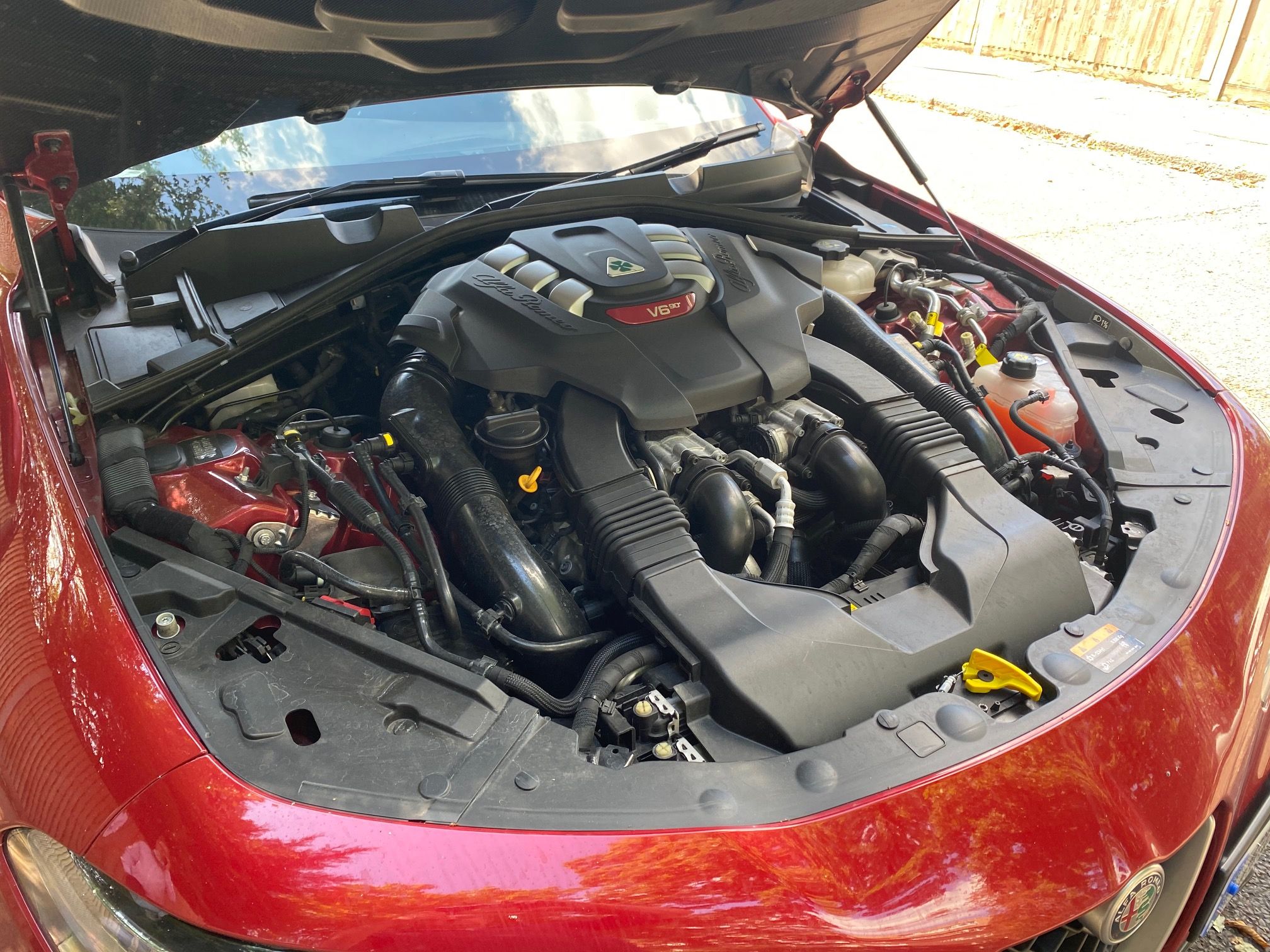 For the Alfa the quoted top speed of 176mph is twice that allowed on the Italian Autostradas, but legal on some German Autobahns, for those very brave (or foolish).  Forget the 45 miles per gallon now the norm with sporty salons.  This Alfa is in the 25 to 30mpg class with just about 400 miles on a full tank.  BTN tried it across the North Yorkshire moors forgetting that petrol stations are far apart.  The sat nav showed the distance to the next filling point but as we dived into Pickering the gauge indicated empty.  We made it!

Drinking all this fuel was a Ferrari-derived 510bhp 2.9-litre twin turbo V6 coupled to a special torque differential to get all that power down through the rear wheels.

Viewed externally the Quadrifoglio looks like any other model in the Giulia range except for three giveaways. The Quadrifoglio (or 'Cloverleaf') badge that the Italian maker applies only to its most focused models, and very attentive yellow brake callipers that sit behind the distinctive 19in alloy wheels and provide excellent stopping power.  As becomes a sports saloon the handling is neat and precise with little body roll.

Cars these days tend to be quieter and quieter.  The Alfa Giulia Quadrifoglio does not come into that category under hard acceleration.  Inside and outside the noise you hear is sporty. 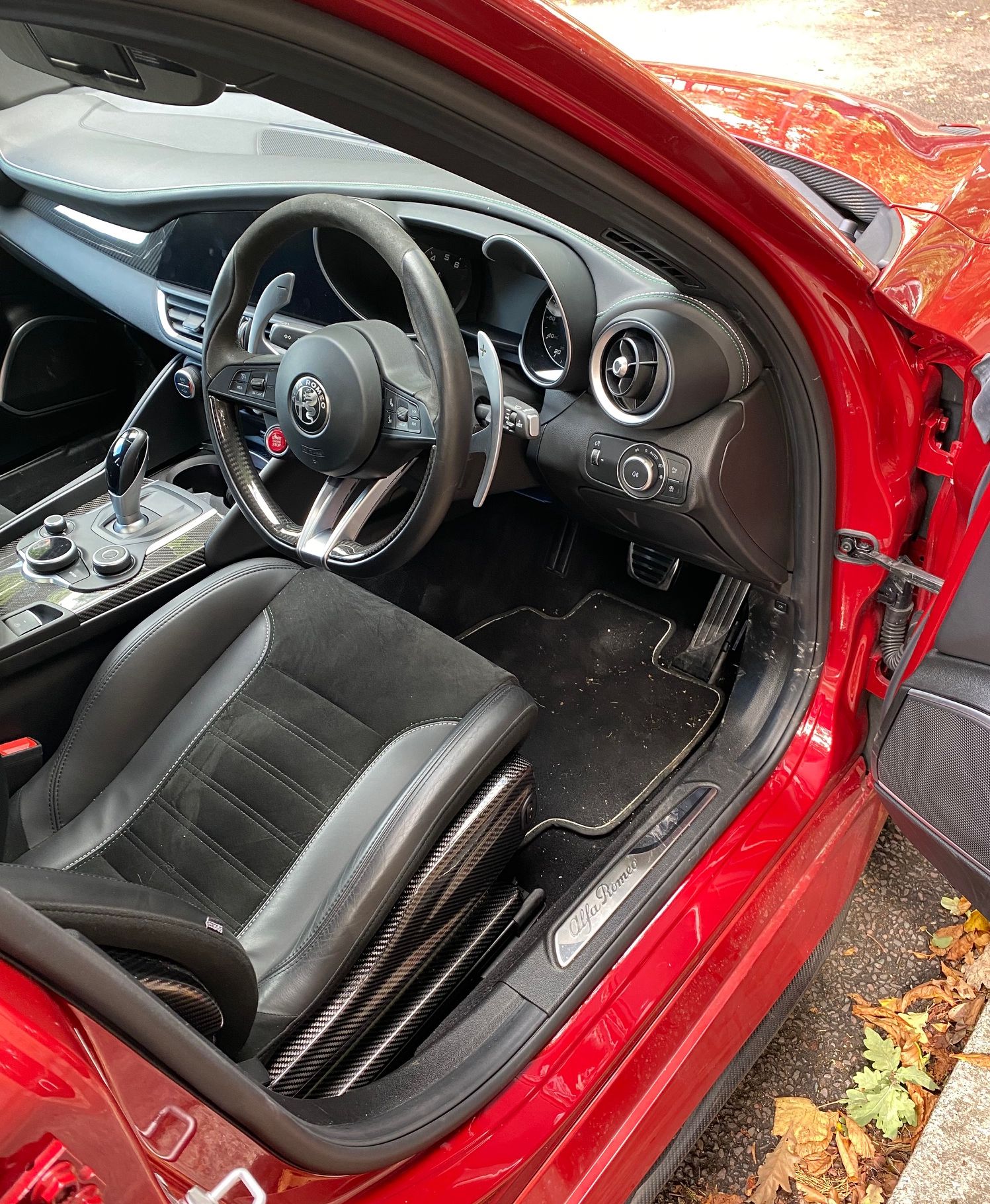 'Active Torque Vectoring' helps get the power down through the bends, 'Active Suspension' varies the damping and 'Alfa Chassis Domain Control' connects the different systems to deliver the best set-up as the car is being driven.

Not visible but adding to the car’s outstanding performance is the use of ultra-lightweight materials including carbon fibre for the bonnet, roof, front splitter, rear spoiler and body inserts, as well as aluminium for the doors and wings.

There has to be some serious negative points about a car with an ‘’on the road’ list price of £74,045.

We searched for ages in both the handbook and around the car for the fuel filler release only to eventually realise that there was no such anti-thief measure.  Clearly where this car is sold syphoning off petrol is a thing of the past.  The Sparco Carbonshell Bucket Seats seat has a six-way manual adjustment.  Once set it is fine but no memory for the next pilot.  At £3,250 it does seem an expensive addition.  We have a four-wheel drive Stelvio version coming later in the year.  It will be interesting to see what seat is fitted.  For the pilot there is a sporty flat bottomed steering wheel with paddle adjustment.

Included in the basic package is a whole host of features, many of which are now standard on most executive cars.  These include blind spot warning in the rear-view mirror with rear cross path detection, lane departure warning, a 7in colour TFT instrument cluster far superior to the analogue system still fitted to some cars, and within it a turn indicator linked to the 8.8in navigation system.  It is a fine alternative to the Head Up Display (HUD) offered by some manufactures.  The eight-speed auto box is extremely smooth and particularly when you put your foot down. Digital audio broadcast armrest ports are a novel introduction, another way this Italian Express is different. 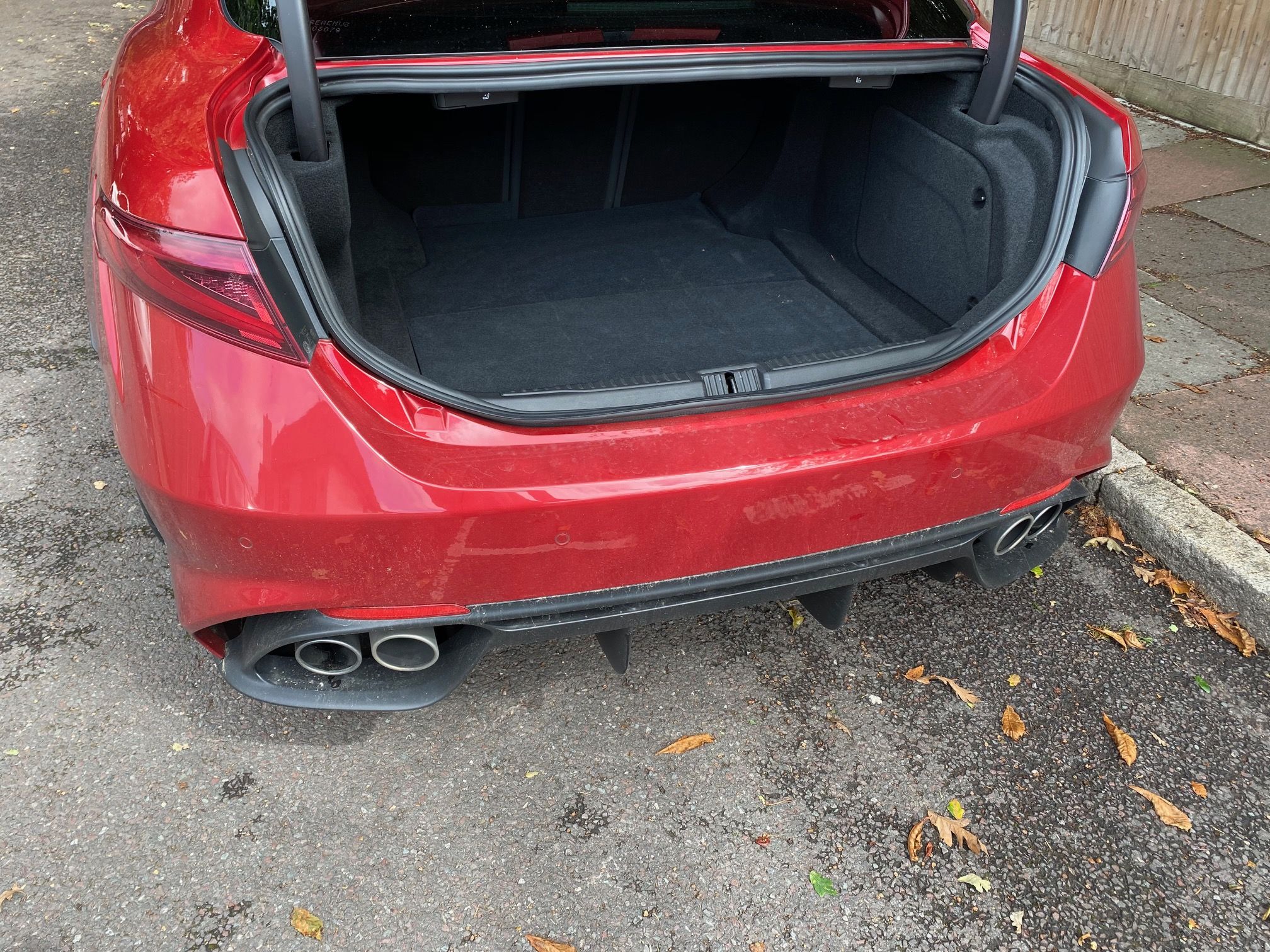 Active Cruise Control is fitted to automatically adjust the car’s speed to maintain a safe distance from the vehicles in front. In conjunction with the traffic sign recognition system, this technology adjusts the speed to within the set limit, for a more comfortable drive. If you are an Alfa owner the system is probably very easy to get used to, but with an up/down switch it is different than cars on recent road tests.

Plenty of room in back, but the middle seat would not be ideal for a long journey although provided with a seatbelt and headrest.  It is part of the split 40/20/40 arrangement that offers even more space in the rear.  The boot can be automatically raised from the key fob, but it is one way.  You still have to pull down to close.