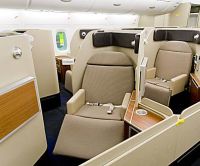 QANTAS is to invest US$400m to upgrade seats and in-flight entertainment on nine Boeing 747-400 aircraft, and reconfigure its Airbus A380 fleet.  Out goes First Class on the Boeing aircraft, replaced by a similar flat bed Business Class to the Airbus A380, plus an all-new economy seat and new in-flight entertainment system.  The planned 20-strong A380 fleet will be split, 12 aircraft with 14 First Suites, the balance with just Business Class, Premium Economy and Economy.  First will be offered on daily services from Sydney and Melbourne to London via Singapore and Los Angeles.  The upgrade and reconfiguration programme will commence at the end of 2011 and is scheduled for completion by the end of 2013.  The airline says that the changes have been brought about due to changing passenger requirements.  Qantas is one of the few carriers to remain profitable during the downturn. www.qantas.com.au