ON TOUR: A Train to the Sky

BTN this week adds to the ‘wish list’ for many at any time, even more so now.  John Burke recalls a breathtaking scheduled ride that hopefully will return as an excursion for 2021. 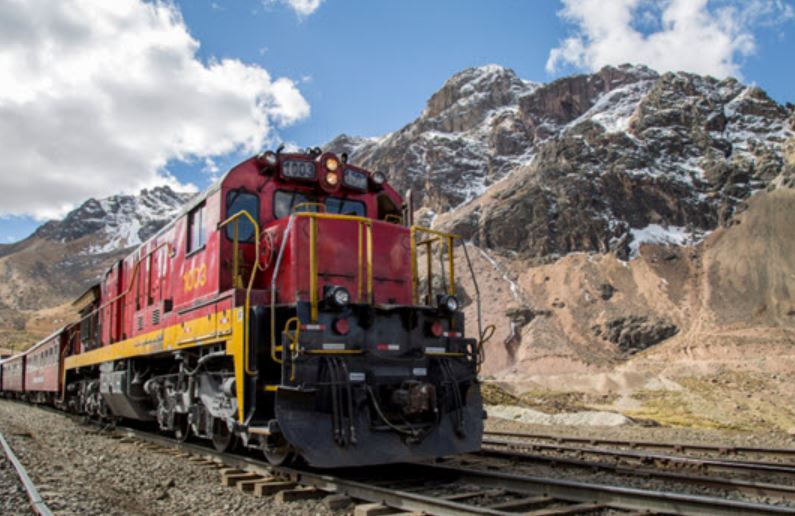 The mists of dawn had cleared as I walked through dusty streets to the grandiose station, built in 1908.  Milling about were hawkers and pickpockets, beggars and passengers – jabbering mostly in Spanish under the watchful eyes of policemen in pith helmets.  But this was not the Atocha main rail station Madrid of the ‘sixties, but Desamparados in the capital of still impoverished Peru.

It remains the occasional passenger terminus of a railway that literally takes the breath away.  Its 207 miles were completed after the original railroad company was acquired by Peruvian Corporation in 1890.  Nationalised in 1969, there was once a pair of daily trains to carry 800 passengers eastward and westward, but income still comes from transporting tons of ore from the Andes to the Pacific. It remains one of the world’s historic lines.

A first-class ticket from Lima to Huancayo, costing $8, bought one of the most spectacularly cheap rides on earth.  The other class would have been an even bigger bargain, meeting Quecha-speaking peasants with children, parcels and chickens, as crowded as in Spain’s onetime third-class.

With a ticket purchased the previous day (as required in Peru), I went straight down to the low, wide platform.  Arrived there from the neighbouring port of Callao was a green and yellow diesel-engine, whose brass plate identified ‘Montreal Locomotive Works’ and six orange carriages made in Romania.  Their yellow logo read ‘Enafer-Peru’ and then ‘Ferrocarril del Centro’ to distinguish this from the southern line between Cuzco and Lake Titicaca.  Funds never materialised to join the two.

The carriages’ decor was a cool green, with tables between the comfortable vinyl seats.  Soon after departure – at 07:40 sharp – a dusky Peruvian boy in a red jacket took orders for “Desayuno! … Desayuno!” (breakfast).

The train passed the cathedral and presidential palace, built by the conquistadors, all the while hugging the right bank of the stony River Rimac.  Then it went through the pueblos jόvenes, peripheral townships whose wicker cabins and brick huts, crammed with descendants of the Incas migrating to Lima, overflow into the Andean foothills.

Within half an hour, the train was visibly climbing and, at 1,600ft, crossing the first of 61 bridges made in England or America.  At this point desayuno arrived: bacon and eggs with Peruvian coffee.  I did not finish until we had reached Chosica (2,400ft).  This is a popular resort for the wealthy, as its stone dwellings in a Pyrenean-type landscape stand above the cloudbank that envelopes Lima from May to October.

The first full hour of the journey was signalled by a long toot, as the locomotive approached the San Juan tunnel (2,296yd), the first and longest of 66 which alone would have made the world’s highest railway such a feat.  The entrepreneur, Henry Meiggs from Boston, used mules and llamas to bring up equipment for local labour and collies whose descendants run Peru’s many Chinese restaurants.

Higher still went the train, and cacti could now be seen on the mountainsides. With an average gradient of 4½%, the Pacific side is so steep that at 22 places − having crossed some points and passed a loop − the train would shunt up to buffers.  The detached locomotive then went onto a turntable to pull back the carriages from the other end up to a higher branch.

The track still followed the Rimac, now a stream tumbling from waterfall to waterfall.  There were glimpses of the hard road over the Andes, with the odd bus or lorry wheezing along.  At one of the few places where the track is double, a freight-train clanked by – truck after truck laden with minerals.  Even today, over half of Peru’s exports consist of copper, silver, iron, gold, lead, tin and zinc.

Onward climbed the train, past San Bartolomé (4,896ft) where women in bright shawls sold fruit from the platform … past Tamboraque with its smelter … past San Mateo, the source of Peru’s famous mineral water.  Once, a macaw in dazzling colours was spotted, and then I became almost dizzy looking down on a canyon.

By 11:00 we seemed to be floating in brilliant skies as the altitude was already 10,500ft.  The carriage got hot despite half-drawn blinds on the left side (the sun goes north below the Equator) and the best views were on the right anyway.  Yet passengers began to doze, as breathing became heavy.  It was not so bad for the Indian highlanders, but an effort for criollos used to coastal climes.  A doctor in a white coat passed through the carriages with a rubbery black bag, offering oxygen.

We were now at 12,000ft, having made a steep ascent from Rio Blanco to Chicla.  The breathtaking panorama, for those whose eyes still focussed, included age-old Inca terraces.  Just before the burning sun reached its zenith, the toiling train pulled into Casapalca (13,633ft).  There were miners in yellow helmets, and cabins with metal roofing instead of cottages with pantiles.

By noon we had barely covered a third of the 270 miles to Huancayo.  Lunch came as the train reached Johnston, one of the longest switchbacks.  I had a fizzing bottle of beer, labelled Cuzqueño, with chicken and rice. Soon, the gradient became easier, but there were eight tunnels in two miles before the final one to Ticlio where a narrow-gauge track climbs to a record 15,806ft.

A long tunnel goes through Mount Meiggs whose peak is marked by a metal flag in Peru’s red and white colours.  This once boasted the world’s loftiest passenger station, with the name and height displayed in Spanish: "Galera  Altura15,681 pies".

At long last, the train began to go down the eastern slopes of the Andes as further zig-zags brought us to Yauli at 13,544ft.  The sun’s glare was still intense, and the dazzling snowcaps were in contrast to the deep blue sky.  For a long time, we seemed to slide along a gently falling plateau, where sheep grazed among patches of red rock, before halting at industrial Oroya (12,556ft) from where a branch goes 82 miles northward to Cerro de Pasco, one of the world’s highest mining towns.

The westbound train was also stationery, so Indian women, wearing shawls and trilbies, did good business in bringing sweetcorn, lemons, oranges and bananas into the carriages.  Through the window could be seen a block of flats, three storeys high, as well as slag-heaps produced by Centromin’s smelter.

The last 80 miles from Oroya to Huancayo were not completed until 1908, for the line had been dogged by financial and political problems.  Out into the Andean countryside again, and there were more signs of cultivation.  Some smallholdings kept pigs and donkeys, while now and then alpaca skins could be seen drying outside humble dwellings.

By mid-afternoon, the descent lay through an idyllic vale.  The landscape was dotted with rich farmsteads in Andalusian style, surrounded by fields of maize and potatoes ripening in rich, red soil.  Beside the track rushed the broad Mantaro river whose waters would eventually reach the Amazon, and it was spanned by ropes like those that parted in The Bridge of San Luis Rey.

As the snowy peaks of the Andes faded into the distance, we stopped at Tambo where the valley opened wide.  The shadows were lengthening when we arrived at Jauca, which was Pizarro’s old capital.  Here, the train had to reverse around a copse of eucalyptus trees before continuing to Concepcion (10,655ft).  Barefooted urchins were watching women wash clothes in a stream close to the track, with the small town’s bullring in the background.

The final stretch was a slight climb for five miles to the terminus, the route having included 22 switchbacks and 66 tunnels as well as 61 bridges.  The first had spanned 238 yards, a late British replacement double the length of the next two longest.

The timetable gave arrival as 17:00, but it was an hour later when the train pulled into what was then a tiny station, considering that Huancayo (10,702ft) is a provincial capital.  The ancient market town has long handled two-fifths of Peru’s wheat as well as sweet potatoes.  Handicrafts include woven tapestries and silver jewellery. 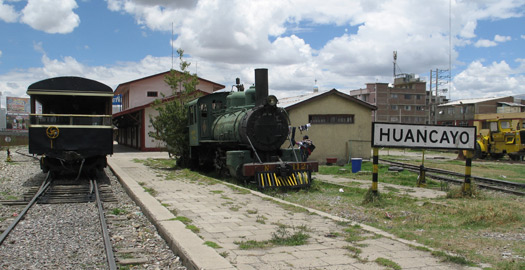 Huancayo retains a fine cathedral in colonial style, but many old buildings of my day have been replaced by modern architecture as the town grew to 350,000 inhabitants.  As for its vital link with Lima, the communist guerrillas of Sendero Luminoso partly put paid to the scheduled passenger service by dynamiting the largely single track at will, and then better roads and buses took over.

Six excursions were planned for this year before the coronavirus, but the track remains operable for freight anyway.

Very interesting description, almost putting me to sleep at times. Incidentally, the westbound train was most probably stationary!

We are both right. Tanggula stole the title in 2006, but closed three years later.

Galera is not the highest station in the world. That distinction goes to Tanggula in Tibet at 5,608m.