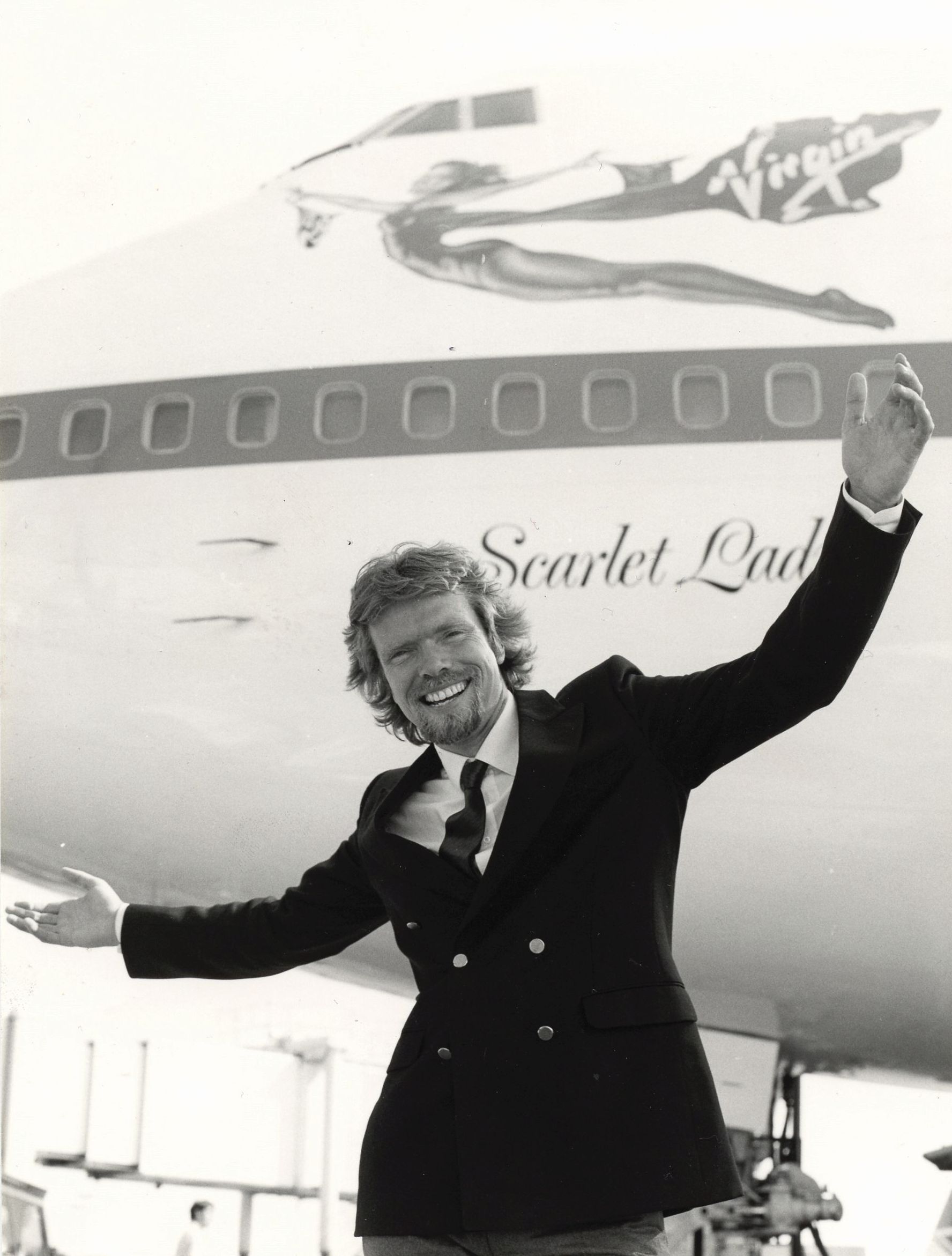 Perhaps it is not the trendsetter it once was, but it is still a very fine airline, the Virgin Clubhouse Lounge at Heathrow T3 setting standards other airlines cannot reach.  John, and BTN Editor-in-Chief Malcolm Ginsberg, reminisce and remember some fun days.  Long may they continue.

This is but a short history of an award-winning, original and distinctive transport company.  It is not just the story of Richard Branson.  His public persona had emerged 15 years before the birth of Virgin Atlantic Airways.  It is the narrative of the tens of thousands of staff who over the years have made Virgin Atlantic what it was until the Corona virus struck.

By 1984 Richard Branson, then 34, was already a very successful record producer, the owner of the Virgin Megastores and a big personality in the entertainment business.

After a chance meeting with the late Randolph Fields, owner of the British Atlantic Airways brand, Virgin Atlantic Airways was created with Gatwick Airport as its main base from where flight VS1 took off for the inaugural flight to Newark on Friday 22 June 1984.  Quite a change from the original British Atlantic idea of flying to the Falkland Islands. In those early days competition at Gatwick was British Caledonian but by July 1987 British Airways had taken over BCal and BA Chairman Lord King described the planned merger as "an unrepeatable opportunity to create a British airline to take on the world." No mention of Virgin Atlantic. 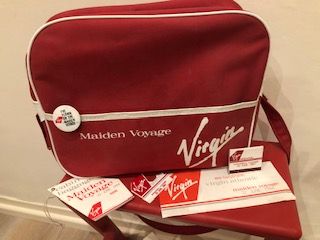 Laker Airways had failed two years previously citing unfair competition from BA as the main cause of its demise.  Branson, for whom Freddie Laker was a hero, was to fight a running battle with BA over the years. Complete books have been written about the BA ‘dirty tricks’ campaign and for many of us reporting on the endless skirmishes if not wars between Branson and King during this period we were struck by the vehemence with which the late Lord King attacked the new boys on the block. Who finally wins we have yet to see, but it can be argued that the passengers won.  Virgin has problems, but so does British Airways!

Virgin Atlantic has always been enterprising and led the industry with seat-back videos in all classes, in-flight entertainment that you wanted to watch, food that was very edible and a different approach to the passenger. It quickly copied Eva Air when that carrier introduced Premium Economy (or Premium as Virgin Atlantic now calls it) and the Club Lounges – the hairdressers, beauticians etc. were a complete innovation. Upper Class was originally located in the upper deck of the Boeing 747 and included a flat-bed (literally flat with a board) and – here’s a great innovation – you could move around, talk to others, sit at the bar and have fun. 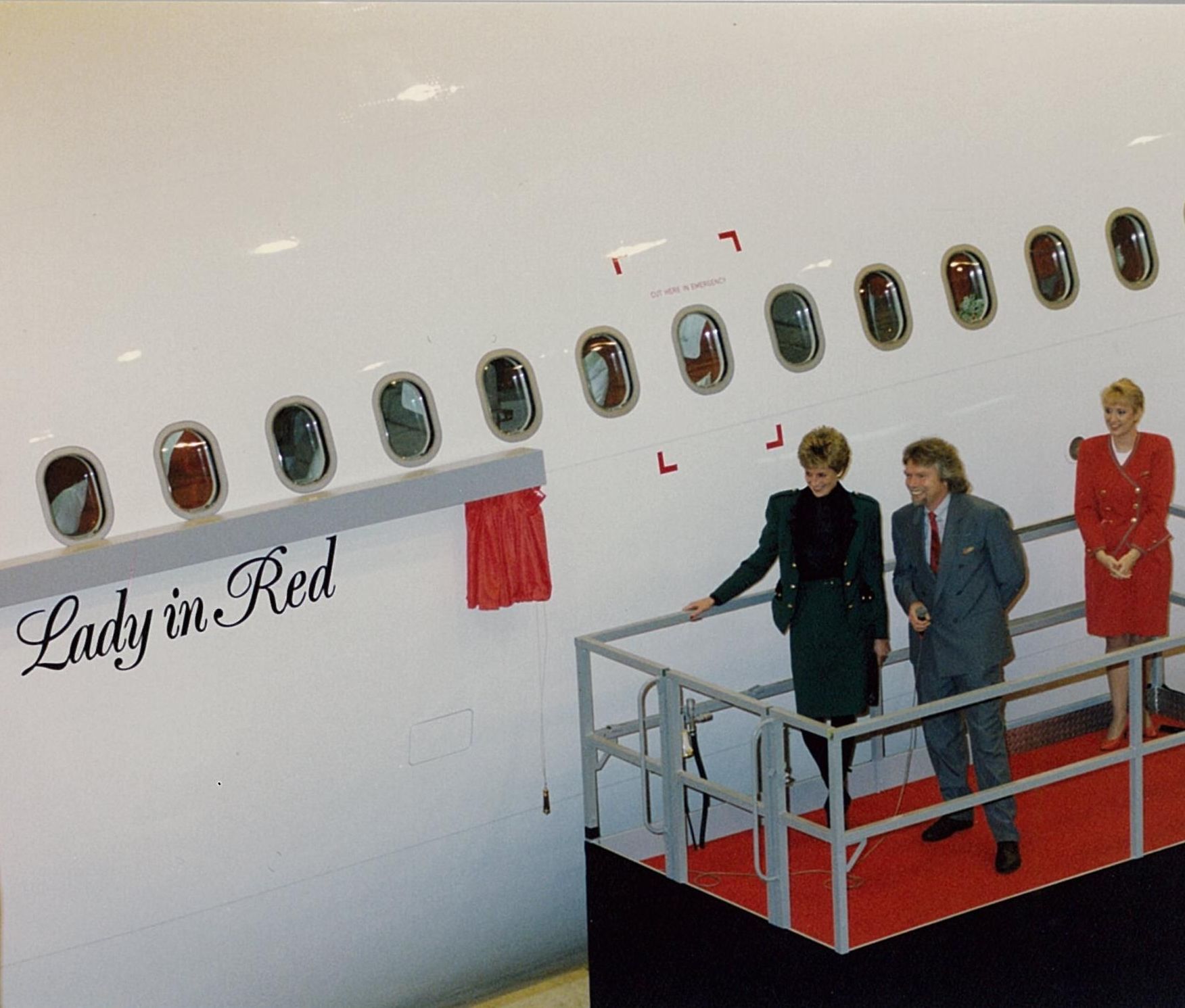 But above all from a journalistic point of view the public relations of this airline was legendary. Until Virgin came along, for the most part a new route inaugural was a plane arriving under a rainbow of water from the fire crews and possibly the cutting of a cake. Now came something different as Branson proved himself to be the master of media coverage. For all press - written, radio and TV.  And plenty of photo opportunities.

Reporters on a Virgin maiden flight talk about it to this day – if they can remember anything at all through the oceans of champagne that were served.

With the Virgin Music connection there were stars galore, often playing on board, and personality guests, bound to gain media although, as time went by, Branson himself was the main attraction. Always amenable and ready for an interview Richard could talk to The Sun one moment and The Financial Times the next.

The inaugural to Las Vegas was highlighted with the return flight liquid refreshment supply drunk dry on the outward journey and journalists presented with Virgin Media phones and a chance to call home ‘for free’.  Those in the ‘back end’ were invited ‘up front’.  It got a bit busy with the bar now located on the lower deck, the experienced ones disappearing upstairs. 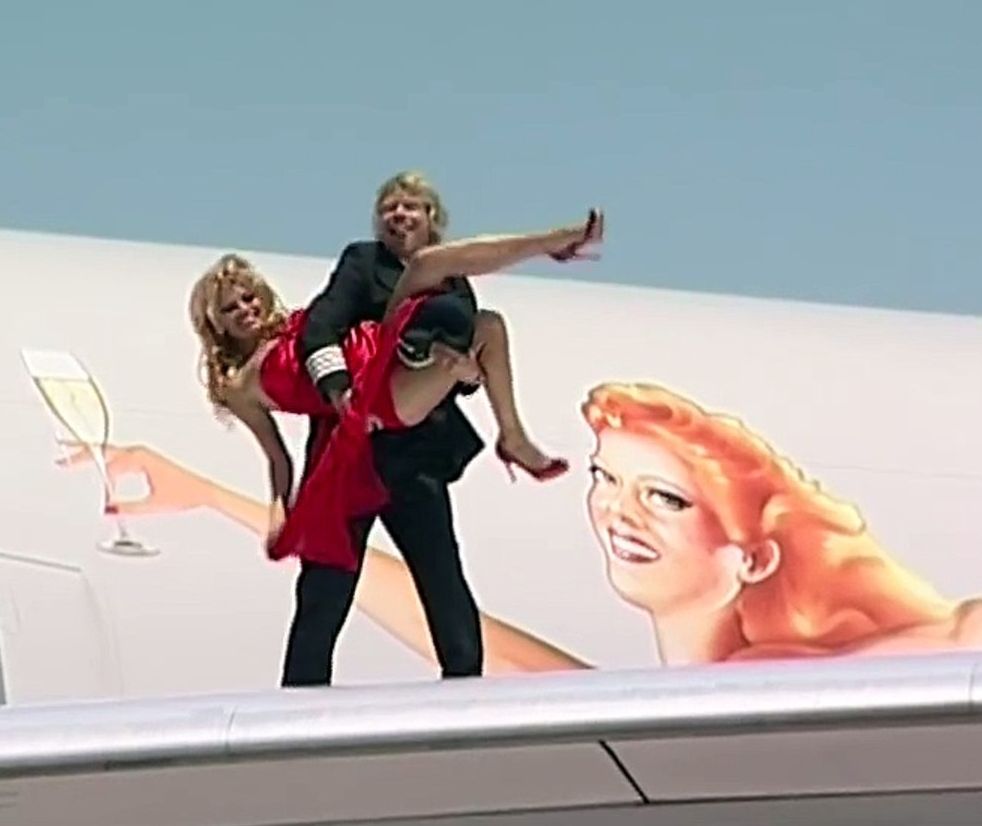 On a previous first to Toronto some hacks found themselves sitting on the steps of the Town Hall with Richard asking whether he should launch a mobile phone company in the US. We certainly thought so and do wish we had brought shares in the enterprise at that time?

It was a tradition, of course, to collect business cards from travel agents and award a free flight in return. In Toronto with hundreds of agents gathered for the launch party every single agent gained a free return ticket.

Nigeria was but a day out, Gatwick, Lagos, Abuja, Lagos and back to Heathrow with parties in both the major cities during which everyone was invited to sample the Virgin experience. Chiefs and dancing warriors lined up to board – but what could we do with the chiefs' guns? It was never a dull moment but, of course, all before 9/11. Baywatch star Pamela Anderson found herself on the wing of a 747 at New York JFK.  Nobody can remember why but the pictures went around the world. 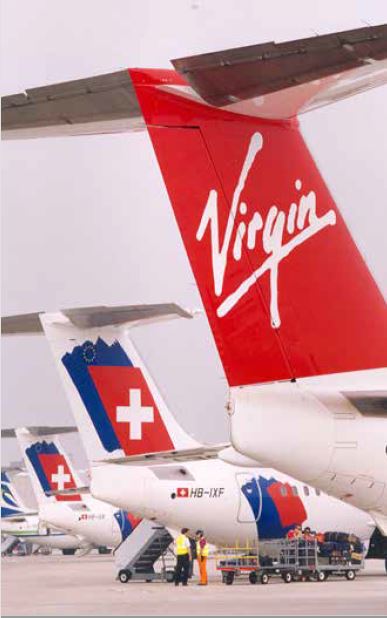 But perhaps the best example of the Virgin PR machine at work was when they talked about the aircraft which they never flew. Virgin ordered six A380s for delivery in 2006. Acres of newsprint was filled with stories of walk-in duty-free shopping on board, a games room, even – pie in the sky – a swimming pool. The press lapped it all up year after year until, in 2018, the deal was quietly dropped as Virgin ordered A350s and the A330 neo.

Meanwhile on the ground and on short-haul flights the picture was not so rosy. Virgin West Coast was not a spin-off, but as a rail operation to the high standard of service epitomised by the airline.  That has now gone.  Virgin East Coast was a branded train project which never made economic sense.

When BA adopted their 'world designs' livery in 1997 and dropped the Union flag, much to Mrs Thatcher's annoyance, it was Virgin which picked it up and became the British flag carrier'.  sense.

Virgin Atlantic has stood the test of time but not all the airline ideas have worked.

As with other of his business initiatives (there are 400 Virgin titled companies) many of the founder’s ideas did fail. Virgin CityJet was botched at London City Airport, there was a bizarre attempt to launch a service between Gatwick Airport and Maastricht in the Netherlands using a chartered BAC One-Eleven, and an Athens schedule with an Airbus A320.  Luton to Dublin was tried using an elderly Viscount.  And there was Little Red at Heathrow!  It was never going to work.  It took Richard three months to make an appearance.  He had lost interest.

Virgin America came and went – much to Branson’s annoyance – and is now part of Alaska Airlines.  Virgin Australia is just about with us with news expected shortly.  Virgin Nigeria was short-lived and Virgin Sun, a British charter airline lasted two years around the turn of the century.

Delta Air Lines has owned 49% of Virgin Atlantic since 2012, purchasing from Singapore Airlines, a shareholder from 1999.

After 23 years at Virgin Atlantic Steve Ridgeway departed as CEO in Spring 2013 replaced by American (with a British passport) Craig Keeper who himself also retired at the end of 2018, the present incumbent Shai Weiss, a pleasing Israeli, and a long-time associate of Branson, previously Chief Commercial Officer.

For many years the mainstay of Virgin Atlantic has been the Boeing 747, popular with passengers, less so with airlines with its heavy fuel consumption and maintenance costs.  The last has been grounded.  It will be missed.  Virgin Atlantic was the lead carrier for the Airbus A340-600 but that has now gone before it reached middle age.

So where, subject to the virus and the all-important finance – does that leave Virgin Atlantic. Well, the answer could be with one of the most modern and fuel-efficient fleets in the world. The 787-900, the A350-1000 and its A330 ceos, soon to be replaced with the 14 A330-900 neos which it ordered for fairly quick delivery at last year’s Paris Air Show.

Over half a century ago the Edward’s Committee reported on the future of British Civil Aviation and the need for a ‘second force’ in British long-haul air travel. 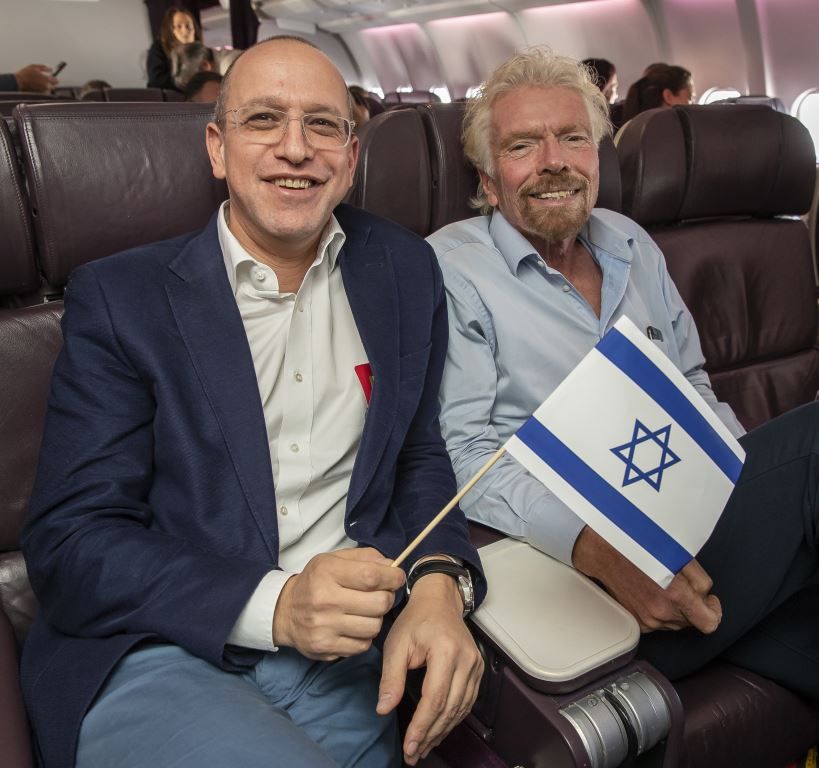 At that time the ‘second force’ was British Caledonian but after the 1987 BA take-over of that airline responsibility became that of Virgin Atlantic. If VS falters in the next few months the British traveller will find themselves in a much darker space. Will a combination of Norwegian and perhaps JetBlue be enough to provide the trans-Atlantic competition to BA and the American carriers?

When we know how to live with the virus and start travelling again we can only hope that Virgin Atlantic will be around in 2021 to celebrate yet another birthday.

Also refer to Delta Air Lines for all US destinations.

Really enjoyed this retrospective, thanks!