Haiti back on the airline map 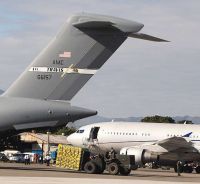 HAITI'S international airport has officially re-opened for limited scheduled flights with American Airlines making a return to Port-au-Prince last Friday (19 February) and Air Canada and Air France to follow shortly.  The airport was turned over almost entirely to disaster relief and military flights after the 12 January earthquake, which destroyed hundreds of buildings in the capital, Port-au-Prince, and killed 212,000 people according to official figures.  At the peak of the disaster the airport had a capacity of 120 landings of military and relief aircraft daily.  Those flights have dwindled to an average of about 70 daily in recent days.  The quake caused serious damage to the airport's terminal.  The American military have repaired airport lighting and the part of the terminal that the airlines will use.  The airfield is being run from a portable control tower brought to Haiti by the US Federal Aviation Administration. www.azworldairports.com/Haiti