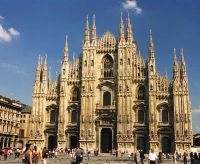 ALITALIA, or better described as the New Alitalia, was launched in January 2009, a merger of the bankrupt existing airline and Air One.  It was backed by a group of Italian entrepreneurs along with a major bank.  One year on it has carried 19.6m passengers at a load factor of 65.4%.  Last week the airline unveiled its three-year development plan for services at Milan's Linate and Malpensa airports.  It calls for the consolidation of Alitalia’s premium service from Linate (city) Airport, a new Miami route from Malpensa airport and the launch of a new business model for Air One flights, a cross between a lost cost and traditional airline.  Now called Smart Carrier Air One, the division will offer 14 destinations from Malpensa to Italy and the Mediterranean basin.  The destinations served by Alitalia from Milan will increase from 39 in 2009 to 47 in 2012 with the number of passengers expected to rise from 6.9m to 9m. www.alitalia.com