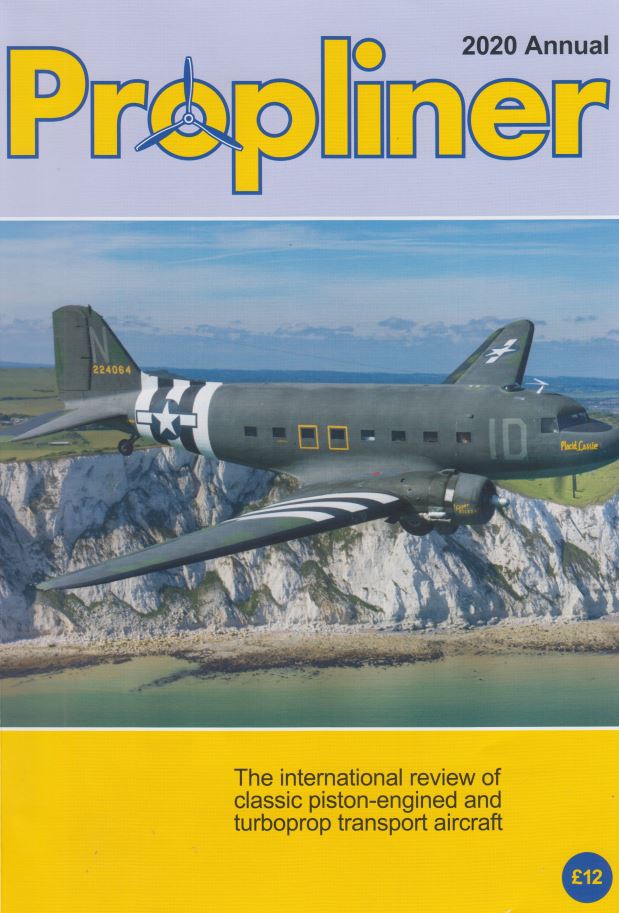 In January 1979 Braniff introduced Concorde on what we would now call ‘branded’ services between Washington and Dallas, Air France and BA aircraft originating in Paris and London.  Over the US the aircraft flew at Mach 0.92.  The operation lasted a little over one year and if anyone says he saw a Braniff Concorde don’t believe that person.  No aircraft was ever repainted although the American airline did its best to “Braniff” the interior.

At the same time an airline magazine was launched which to this day refrains from even mentioning pure jet (rather than turboprop) aircraft. Produced purely as a hobby by a group of enthusiasts ‘Propliner’ appeared quarterly until March 2015, when publication ceased after 141 fascinating issues.  It was reincarnated later the same year with ‘Propliner Annual’, the 5th 2020 version out now.

Long since relegated to less glorious work, some of these fine aircraft still fly today.

This latest ‘Propliner Annual’ is the largest ever, its 160 pages crammed with feature articles, news items and photographs galore. 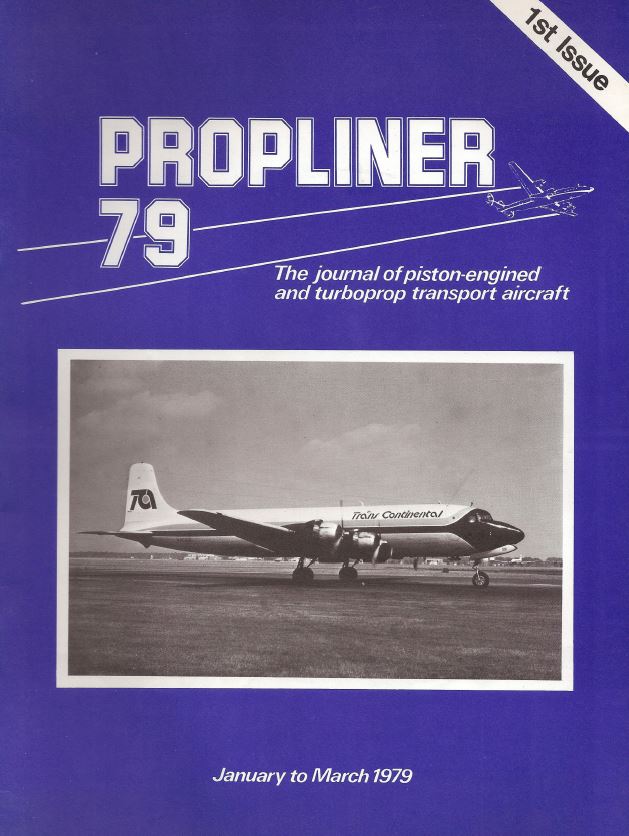 Last year’s ‘Daks over Normandy’ event generated a series of reports highlighting the participation by the D-Day Squadron from the United States and their crossing of the North Atlantic; the event at Duxford, and the enormous effort made by the Museum of Mountain Flying in Missoula in bringing ‘Miss Montana’, surely the star of the show from the USA.  Six DC3’s made the trip.  Who knows how many made it over during the Second World War and in the years after.   It is thought that 16,000 plus were built in total.  How many are still airworthy? Nobody knows but the FAA say 204 are registered in the United States.  Under the title “The Friendly Invasion” twenty eight detailed pages tell the story of the great Douglas ‘planes and how they ‘beat up’ Europe in 2019. No less than 15 made their way across "The Pond" to celebrate 75 years since D Day. Last year "The Yanks" really came!

Other Dakota-related features include the subsequent events in Germany to commemorate the 70th anniversary of the Berlin Airlift, and a smaller gathering of DC-3s at the enchanting Lido Airport in Venice.

Bristol Freighters are well represented in this year’s ‘Propliner Annual’, with Part 1 of the Silver City Airways story covering the period up until 1954 when the airline transferred operations from Lympne to Lydd (Ferryfield). On the other side of the globe, Murray Kirkus describes the operations of Straits Air Freight Express (later SAFE Air), and Roger McDonald reveals the details of the troubled Butler Air Transport Airspeed Ambassador acquisition.

In Part 3 of his ‘Serving the Outback’ series, Keith Simpson describes the role played by the de Havilland Heron, and Peter Layne chronicles the history of his favourite aircraft, DC-3 ZK-AWP. Ralph Pettersen travels to Alaska to provide an up to date report on ‘propliner’ activities there, and this is complemented by Robbie Shaw’s memories of a flight aboard a Northern Air Cargo Douglas DC-6 to Kodiak, Alaska, many years ago.

The VASP Viscount operation is described in detail by Marcelo Magalhaes, and Karl Hayes provides an account of the Beech 18, Riley Turbo Skyliner and Convairliner operations flown by Wright Air Lines from Cleveland, Ohio. Aer Lingus became the first airline in the world to introduce the state-of-the-art Fokker Friendship in 1958, and Eamon Power provides a comprehensive account of the background to the operation and subsequent service life with the Irish flag carrier.

Having unearthed further operational details of the Constellations flown by ACE Freighters in the mid-sixties, Peter Marson chronicles the entire operation from delivery of the first aircraft in February 1964 until the collapse of the airline in September 1966 – the UK’s last Connie airline.

Fred Barnes takes us on three separate trips to the Shetland Islands, aboard a Viscount, Hawker Siddeley 748 and finally a modern ATP, while Maurice Wickstead concludes his Post-war Airlines of India story, and Trevor Bruce remembers both spotting and work days at Southend Airport when he was young. It was here that Freddie Laker started business and Sean Connery and his Aston Martin got airborne in a Carvair.

There are also updates on a number of exciting airliner restoration projects, and a Readers’ Response section in the 2020 Annual. Yet another great read!

Propliner back issues are available and you can search on the Index (PDF) for an aircraft article that might interest you.  The actual issues are not available on the web.

Also see AND FINALLY in this issue. 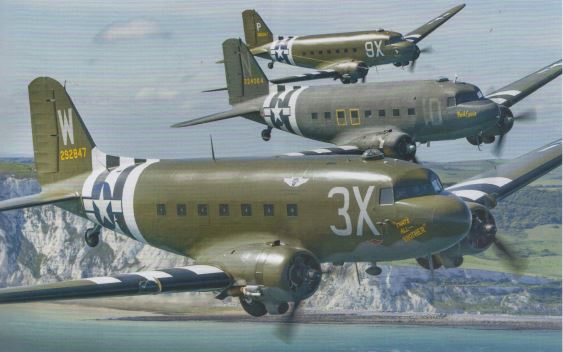 The history of the Viscount is not in the 2020 Propliner Annual. Of course it does get many a mention within the pages. Maybe by next year a Viscount, Britain's greatest airliner, might be flying again.

Many thanks to Tony Merton Jones for keeping ‘Propliner’ going; it’s a great annual treat. To relive the sights -and sounds- of classic airliners in action, I’ve put together some video clips of ‘London Airport’ from a BSAA Lancaster in the late 40s, to Viscounts and others in the mid-sixties. I hope they provide a brief respite from the today’s rather gloomy airline scene. Click here to watch on YouTube. [Don’t miss the Cunard Eagle DC6 RTO.] Best regards Howard Asbridge Avion Video LLP Note to editor: If the embedded link in this text doesn't work, the url is https://www.youtube.com/watch?v=Mx4YDq6QhXY