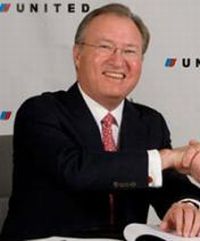 UNITED AIRLINES Chairman, President and CEO Glen Tilton was an outstanding speaker at the London Aviation Club last week.  In front of a very full house (he would have been proud of the load factor) he gave a robust and potent speech, personifying perhaps his airline which has come through difficult times to once again being a leading US carrier.  He renewed his call for overseas investment in US airlines as part of deregulation worldwide to boost industry profitability.  "Capital is global, it is global and doesn't have sovereign inhibitions," he said.  A second round of "Open Skies" is due following the new bilateral agreement between the US and Europe. (SEE COMMENT ABOVE)   American law now prohibits non-citizens from controlling airlines or owning more than 25% of voting stock.  "I support the EU view that in phase two, foreign ownership should be on the table," said Tilton, who has urged looser rules for such investments. www.united.com