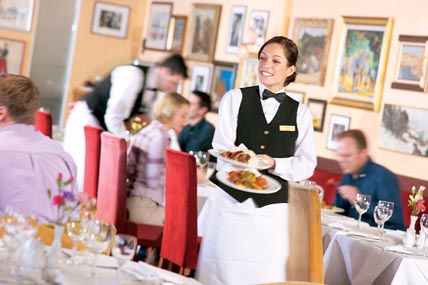 Figures released by the Passenger Shipping Association (PSA) show a rise in the number of ferry passengers travelling within the UK, with 11.4m journeys taken in 2009, an increase of 1.4% compared with 2008.  The number of cars also showed a slight increase, with 2.078m ferry journeys in 2009, a rise of 0.7%.

The news is supported by the latest UK Tourism Survey, from the Office for National Statistics, which shows that trips taken by UK residents in England between June and August increased by a staggering 22% compared with last year, with the amount spent by travellers up 20%.

Is using a ferry cruising?  That is a fair question.  For very short, mainly Scottish island trips, probably not, but when it comes to crossing the North Sea, or bypassing France on the way to Spain on a 30,000-ton plus super ferry it certainly is.

You may be surprised how many islands surround the UK, over 80 named in Wikipedia to 1,000 if you count uninhabited islands and those which disappear under the sea at high tide.

Some ferries are quite basic, but others have tried to emulate the small cruise ships and offer comfortable lounges and restaurants – and other facilities . And of course on some ferries you can take your car, which you cannot on a cruise ship.

Head north and the domestic services of Caledonian MacBrayne open up some of Scotland’s most beautiful and dramaticplaces.  This operator sails to 22 islands and four peninsulas, from Arran in the south to Lewis in the north, serving places from the popular island of Skye to less familiar Raasay, The Uists and Gigha.

Head even further north for the hauntingly beautiful Orkney and Shetland islands, served by NorthLink Ferries with up to three sailings each day to Orkney’s Stromness from Scrabster and nightly sailings to Shetland’s Lerwick from Aberdeen, some going via Kirkwall, Orkney’s capital.

There’s culture, history – and high-speed endurance racing – on the Isle of Man, home to the famous TT races and served by the venerable Steam Packet Company.  Take a trip there from Heysham, Liverpool, Belfast or Dublin to explore the island’s quiet roads or watch others speed around them.

A trip to Queen Victoria’s favourite island is simple with operators Wightlink and Red Funnel, who open up the unspoilt and beautiful Isle of Wight with round-the-clock services across the Solent.  The island is also famous for its festivals, from music to walking, cycling, sailing and powerboat racing.

The Channel Islands are served by Condor Ferries, with sailings to Jersey and Guernsey as well as between the two.  Here, you’ll find castles, beaches, lush gardens and charming yet cosmopolitan towns with a huge array of shopping on offer.

There’s also the world-famous Giant’s Causeway in Northern Ireland to see – a trip that will let you take in the Bushmills distillery, beautiful hidden glens and stretches of rugged coastline: get there with a special Rediscover Northern Ireland deal from operator Norfolkline.  For speedy crossings from Troon or Cairnryan in Scotland, there’s P&O Irish Sea, who can get you to Northern Ireland in as little as an hour.

A full list of ferry operators is shown on www.sailanddrive.com

COSTA, the Italian division of Carnival, is to continue with its popular winter programme with Costa Pacifica, Costa Concordia and Costa Magica.  The Costa Pacifica sails from Civitavecchia (Rome) and Savona (Gerona and Nice are the nearest airports) on 11-night cruises with calls in Italy, Greece, Turkey, Israel and Egypt.  Costa Concordia leaves from Savona on 11-night cruises to the Canary Islands.  Costa Magica offers seven-night Western Mediterranean voyages departing from Savona and Civitavecchia. www.costacruises.co.uk

HOLLAND AMERICA has unveiled its summer 2011 programme with increased sailings from Dover and Rotterdam.  For next year the Carnival Corporation-owned Dutch-based operator will feature seven ships cruising the Mediterranean, Baltic and Northern Europe from Amsterdam, Athens, Barcelona, Civitavecchia (Rome), Copenhagen, Dover (London), Rotterdam and Venice.  Both Nieuw Amsterdam and  Noordam will sail the Mediterranean all season.  The Nieuw Amsterdam, which debuts on 4 July 4 2010, will offer 12-day sailings while the Noordam will feature seven- and 10-day cruises.  The ms Ryndam will sail a series of Mediterranean and Northern Europe cruises ranging from seven to 21 days.  The ms Rotterdam will also sail Northern Europe and Mediterranean itineraries of seven to 12 days, including some that feature the Black Sea and the Holy Land.  The Rotterdam will also sail two nine-day historic transatlantic cruises mid-season.  The ms Eurodam begins her 2011 season with two seven-day Mediterranean sailings and then offers ten- and 12-day cruises in the Baltic.  Both the ms Prinsendam and ms Maasdam will also feature Europe cruises, the Maasdam again sailing its traditional transatlantic roundtrip itinerary from Boston that visits Greenland and Iceland. www.hollandamerica.com

MSC has chosen Southampton as its new base for all ex-UK sailings, which will operate from May to September and sail passengers on MSC Opera to Northern and Western Europe.  Later this month the Naples-based Italian line has also chosen the Solent port to introduce its latest ship MSC Magnifica (and AERBT will be reporting in full on both the ship and event).  Giulio Libutti, MSC Cruises' UK and Ireland Managing Director said, “Southampton Port is well suited to our new planned itineraries cruising to the north of France, Spain and Portugal.  The infrastructure and amenities at the port and in the city make Southampton a desirable and attractive port for us, with great transport links offered by road, rail and air, which will better service our passengers." www.msccruises.co.uk

PAUL GAUGUIN CRUISES is a brand new cruise line with a single ship, the Tahiti-based Paul Gauguin, providing luxury cruises to Tahiti, French Polynesia and the South Pacific.  The ship will be familiar to fans of luxury cruising in general – and French Polynesia in particular – as it was operated by Regent Seven Seas Cruises from its launch in 1997.  Paul Gauguin Cruises took over management of the vessel beginning with its 6 January 2010 cruise.  The Paul Gauguin was designed specifically to sail the shallow seas of Tahiti and French Polynesia, visiting small ports that larger ships cannot reach.  Five-star service and 70% of accommodation with private balconies.  On offer for the balance of the year are 35 itineraries ranging from seven to 15 nights, highlighting such amazing destinations as Tahiti, the Society Islands, Tuamotus, the Cook Islands, Marquesas, Tonga, Fiji and New Zealand.  Each cruise is enhanced by a choice of exciting shore excursions and fascinating lectures by cultural and environmental experts. www.pgcruises.com

P&O will introduce the Azura in April (and there are still a few cabins available for the maiden voyage).  At 116,000 grt and room for around 3,000 passenger, she is a sister ship of Ventura, which entered service in April 2008.  Azura will feature 18 single staterooms, a first in the P&O Cruises fleet, and two large suites for extended families or groups of friends to share. The ship will offer 900 staterooms with private balconies and a select number of spa staterooms, offering exclusive access to the Oasis Spa and added in-cabin extras.  Cruising out of Southampton Azura will this year offer a series of cruises from seven to 16 days. www.pocruises.com

PRINCESS has revived an old tradition, albeit on an experiment basis, of allowing friends and relatives on board ship prior to the sailing.  The programme will debut in March in the ports of Los Angeles and Fort Lauderdale, and then roll out to New York, San Francisco and Seattle.  Called the "Bon Voyage Experience(SM)," the programme is a new twist on the departure celebration of bygone days, when friends and family would routinely come aboard to see off passengers.  Because of increasingly tighter security procedures, this practice disappeared more than two decades ago, but it's now back. Unique in the cruise industry, the Bon Voyage Experience will enable passengers to extend an invitation to their guests to join them onboard during sailing day for a four-course dining room lunch with wine, a ship tour and even a souvenir photo.  Passengers and their guests can enjoy priority embarkation and will be able to spend approximately four hours together on the ship before it sets sail. The cost for the programme is US$39 per person, which can be applied toward a future Princess cruise.  Cruise line Discovery has a similar programme in the United Kingdom whereby prospective cruisers can view the ship at Harwich during the turnaround period. www.princess.com

SEADREAM the highly rated and exclusive yacht style cruise operator has also announced its 2011 programme which includes a visit to London for the first time.  SeaDream's twin mega-yachts SeaDream I and SeaDream II each offer accommodation for up to 110 passengers and are sumptuously fitted out including a large swimming pool on the rear deck, quite unique in its layout.  Immediately prior to its Northern European voyages, SeaDream I will make a 15-day transatlantic sailing in April 2011 from San Juan, Puerto Rico across the Atlantic to the Thames with a stop in the Azores. The 4,000 grt vessels are idea for visits to smaller ports, the Northern Europe itinerary including Marstand (Sweden); Lillesand and Bergen (Norway) and Kuressaare (Estonia).  SeaDream I will also sail in two of Norway’s most magnificent fjords, Hardangefjord and the Sognefjord. www.seadreamyachtclub.com

YACHTS OF SEABOURN has aconfirmed  that Seabourn Quest will be the name given to its newest vessel due into service June 2011.  She follows Seabourn Odyssey which arrived last year and Seabourn Sojourn, launches in June in London.  At 32,000 grt and carrying just 450 guests each, the three new Seabourn yachts are the smallest vessels being built by any major cruise company and in keeping with the line’s strategy of offering guests highly personalised service in a relaxed, sociable and luxurious environment.  The three new Seabourn yachts join another trio of small, 208-guest ultra-luxury vessels already in the fleet: Seabourn Pride, Spirit and Legend. www.seabourn.com

VOYAGES TO ANTIQUITY is a new cruise line operating its first season in 2010.  Its rationale is a series of voyages visiting famous historical places mainly in the central and eastern Mediterranean Aphrodisias (Turkey), Krak des Chevaliers (Syria), Leptis Magna (Libya), Luxor and Karnak (Egypt), Palermo (Sicily ) and Petra (Jordan) as well as such popular port destinations including Istanbul and Venice.  Operating the cruises is the renamed and extensively upgraded Aegean Odyssey (formerly Aegean I) the now only maximum-380 passenger vessel providing the best features of a mid-size ship with a choice of restaurants and various cabin offerings including 41 balcony suites.  Onboard, the emphasis will be on learning throughout each cruise – guest lecturers will play a big role in the cruise experience, with figures such as author Lord John Julius Norwich, who helped plan the itineraries with the cruise line, making appearances.  Shore excursions and wine with dinner are included in the price of the cruise. www.voyagestoantiquity.com