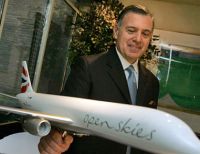 OPEN SKIES, the French British Airways subsidiary, is to introduce a five-times-weekly service from Paris Orly to Washington's Dulles airport starting 1 May.  The flight will use one of the airline's three Boeing 757-200s, offering "Biz Seat" Premium Economy and "Biz Bed" with a proper flat seat.  Speaking at the announcement Managing Director Dale Moss claimed a 27% market share of the Paris – New York Business Class market.  Newark is now the airline’s New York base having dropped both Paris and Amsterdam from JFK.  Moss said loads on the Paris – New York service have been running in the mid-70s.  Spare capacity has been used by offering aircraft for VIP charter services, including one taken up by the French Ministry of Finance.  Other charter clients have been premium sports teams.  Asked whether US government employees (at federal, state or municipal level) would be allowed by their employer to use a foreign-owned airline, Moss remained mum, stating only that discussions were being conducted. www.flyopenskies.com