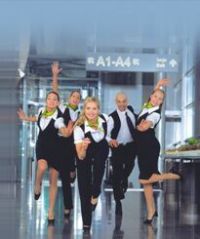 AIRBALTIC, the national airline of Latvia, but also with a hub at Vilnius (Lithuania), will launch on 29 March new flights from that city to Dublin, to Hamburg on 30 March, and to Manchester on 31March.  The airline will operate its first flight to Oslo on 17 May.  The frequencies vary.  For 2009 airBaltic has announced €20m provisional profit, and achieved 6% passenger growth to 2.75m.  In 2010, the airline says it will open at least nine new direct routes from its main base at Riga, and has so far announced destinations including Amman, Beirut, Belgrade, Madrid, Umea and Vaasa. www.airbaltic.com