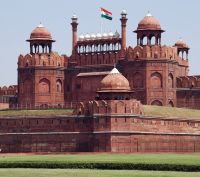 BIRMINGHAM AIRPORT is mounting what is probably a unique campaign to try and persuade an airline to offer direct flights to India.  There are more than half a million people from an Asian background living within a one hour drive of Birmingham Airport, with 350,000 of these of Indian origin according to research, yet travellers have to go via London to get to the sub-Continent.  The “Fly India” campaign aims to gather evidence of the strong support and demand in the region, to reinstate direct services.  Air India originally operated from Birmingham in the 1970s and then started flights between Delhi – Amritsar – Birmingham – Toronto in May 2005.  Sadly it moved its operation to Heathrow in 2008 to secure slots.  The airport says it promised to return saying that the route was a success with more than 100,000 people carried in its last 12 months and with load factors often over 85%.  There is a petition to fill in and representations are being made to Air India, Kingfisher Airlines and Jet Airways as well as the High Commission regarding any bilateral problems. http://flyindia.birminghamairport.co.uk