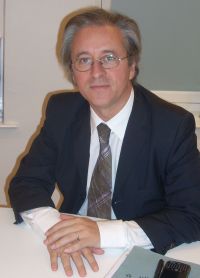 AIR FRANCE – KLM (AF/KLM) has a new General Manger in the UK, Henri Hourcade, a 22-year Air France veteran, whose background is very much from the commercial area of the airline.  The combined carrier now serves 21 British airports with Amsterdam its largest destination in terms of passenger numbers, followed by Paris and, surprisingly Edinburgh, offering seven flights daily from London City.  M Hourcade sees the dockland airport (where AF has been established from day one) as a UK cornerstone for the AF/KLM group, all flights now branded as CityJet, including a twice daily Alitalia operation to Milan Linate.  On the marketing front AF/KLM and Delta have combined forces in terms of their UK sales operations, adding substantially to the efficiency of the whole British operation.  The fine new Skyteam lounge at Heathrow T4 shows the way the alliance is moving, although with completely different operations in terms of aircraft and crewing requirements it could be some time before these duties also are combined. www.airfrance.co.uk