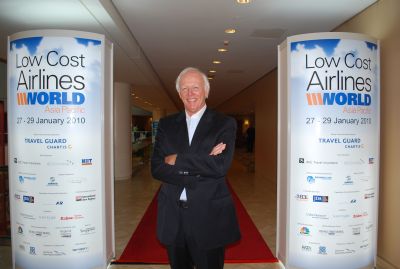 Tony Harrington runs Asia Pacific Public Relations Pty Ltd based in Brisbane  Australia.  A former journalist he reports on the Low Cost Airlines conference held in Singapore.  Next week ON TOUR will bring you details of the Singapore Airshow, which followed a few days later.

Wherever you look in Singapore there’s a crane.  Like pins on a map, each marks a site of progress, in seeming defiance of global economic conditions.  It wouldn’t be unreasonable to assume that the Global Financial Crisis never made it this far.

The same incongruous optimism permeated the Olivia Room in Singapore’s Raffles City Convention Centre last week, where, one by one, bullish executives of airlines and airports took to the stage at Terrapin’s Low Cost Airlines Asia conference to share stories of success with a capital ‘S’.

That’s not to say that the impressive performances of airlines – or more accurately low cost carriers (LCCs) – were unexpected in Asia-Pacific, which is leading the way in air transport growth, and will do for a long while to come.

What is a surprise is the level and consistency of the optimism which swept the Singapore conference, against the worldwide backdrop of airline failures, aircraft groundings, frequency reductions, staff cuts and the most distressed (and distressing) pricing the industry has ever seen.

“There are lots of smiling faces in this room,” said Peter Harbison, Executive Chairman of the Centre for Asia Pacific Aviation, and conference moderator.  “It wasn’t the same last year.  There’s an underlying strong feeling of confidence coming through.  People are still fairly cautious with their money, but they are spending, and the low cost airline model fits this environment perfectly.”

In the same week that legacy carrier Japan Airlines became the exception to  the rule in Asia, declaring bankruptcy and announcing aggressive restructuring, Singapore-based LCC Tiger Airways easily completed a major capital raising.  In the next six years, Tiger intends to expand within the Asia Pacific region and increase its fleet from 18 A320s to almost 70.

And it’s not just Tiger that’s roaring.  LCCs throughout the region are telling similar stories.

“The Indonesian market is expected to grow at 11/12% in 2010,” said Diono Nurjadin, President Director of Mandala Airlines.  “But we would look to grow faster than that.”  Mandala currently operates six 180-seat Airbus A320s and two 144-seat A319s.  At least four more A320s will arrive in 2010, followed in 2011 by the first six of a recent order for 25 new A320s.  Mandala Air also considers regional international service a natural progression. 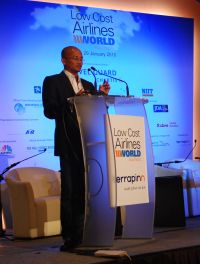 The story is similar for India’s SpiceJet, formed in May 2005 with three Boeing 737s. It now has 19 and plans to added a further five in the next financial year.  A detailed evaluation is also underway for long term fleet growth requirements.  “In India, every carrier is low fare,” said Samyukth Sridharan, SpiceJet’s Chief Commercial Officer.  “Six years back this market wasn’t there.  Now 67% of all Indians who fly are flying low fare.

“Every day, about 20m people in India travel by train.  That’s about the population of Australia.  Of that number, about 2m travel in the upper classes of the train.  But only about 125,000 people board a flight each day,” said Mr Sridharan.

“In India, there are over 450m people under the age of 21.  There are 65m affluent households and GDP is projected at 9/10% for the next three to five years.  The potential is enormous.”

On the day the conference started, Malaysia’s Air Asia announced plans to fly to five more destinations in India, taking to nine the total it now serves.

Jetstar – the low cost arm of Qantas – is expanding not only within Australia but to and within other Asia Pacific markets, and used the Singapore conference to announce the acquisition from International Aero Engines of V2500 engines to power up to 90 new A320s.

What’s more, Jetstar and Air Asia have formed what, at this stage at least, is an operational partnership, exploring cost-saving activities for A320s, from maintenance and procurement to ground handling, staff training and who knows what else.  They’re even talking of combining their common aircraft orders, not only to pressure manufacturers on pricing, but to demand a say in the design of the next generation of Airbus or Boeing narrow bodies.

Even the smallest of Asia Pacific LCCs are growing, with Koustav Dhar, CEO of India’s Jagson Airlines, telling the conference his airline was preparing to expand with BAE RJs, including ex-British Airways units.

Yang Hae-Gu, President of Korean LCC Eastar Jet, said his airline was poised to fly internationally with its fleet of Boeing 737s once open skies arrangements were finalised between Korea, Japan and China.  The market share of Korean LCCs was 44.8% in 2009, said Mr Yang.  The growth of Korean LCCs was 150.4% in the same period.  Last year, said Mr Yang, Eastar Air signed a code share MOU with China’s Spring Airlines.  He foreshadowed significant growth in LCC alliances throughout Asia.

Samyukt Sidharan, of SpiceJet, agreed. “All LCCs have started as domestic operators.  They’re now spreading their wings.”  This June, SpiceJet will be eligible to apply for international air traffic rights, and will do so when the time is right.