ON TOUR: The Danube in winter

It was a superb trip and this report is no more than a ‘taster’ of the Danube and some of the communities we moored alongside as we meandered along one of the great highways of Europe.  In many respects it was a typical river cruise, opening up new areas to learn about not really practical by air.  This particular river cruise visited five countries in eight days.  True, not for everyone, but a great way to see Europe. 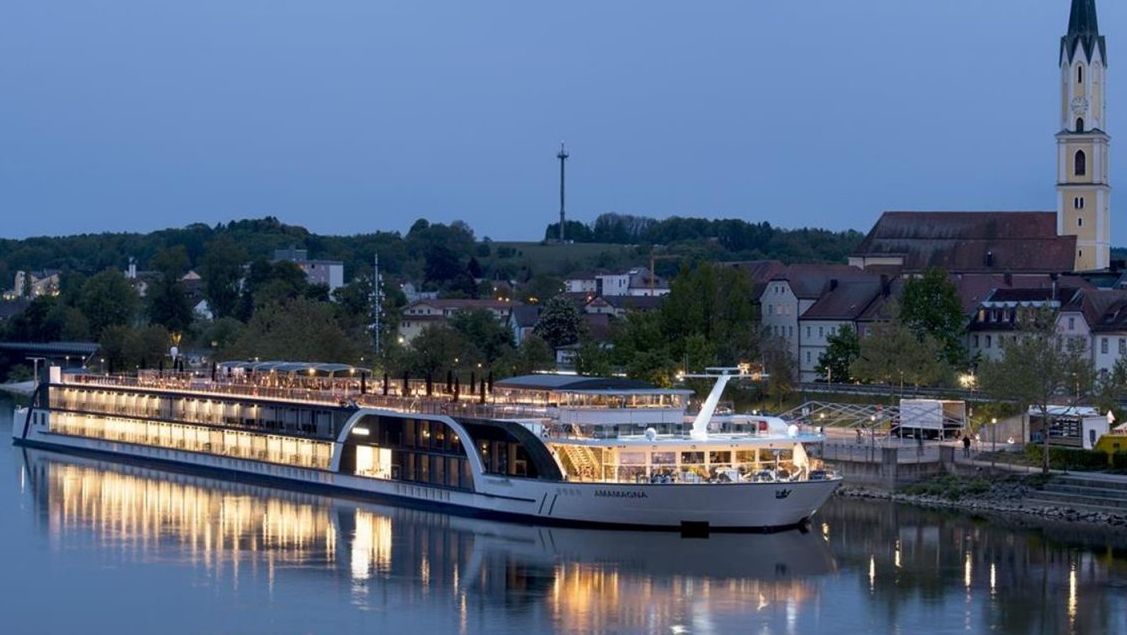 Vilshofen, our starting point, is a typical Danube river municipality about 90min from Munich Airport and much the same by train.  We were welcomed by an evening mini ‘Oktoberfest’ celebration with plenty of Bavarian beer (and local wines) with folk music and dancing in a quayside marquee rather like the real thing but somewhat smaller.  The following morning we grabbed a local map and walked into the pretty town, a picturesque introduction of what was to follow.  Everywhere it was spotlessly clean with most of the information boards duplicated in English.  As with all the points we were to visit it was virtually impossible to get lost with all roads leading back to the river.  At most landing stages AMA offer conducted bicycle tours usually with up to 20 participants.  No electric bikes but perhaps that is something for the future.  The off-ship tours are graded from 1 to 5, with 1 being suitable for the AMA-supplied electric mobility units. 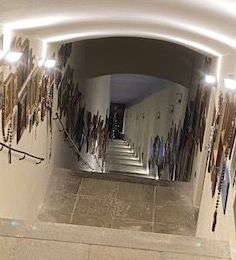 Passau was our first port of call with Magna moored by the city centre.  On a river cruise you tie-up, the gangway comes down and within five minutes one can be away from the ship.  Disembarking your electronic room card is clicked as you step off, and checking in on the way back is the same procedure.

Once on shore you can join a previously booked organised tour, (the majority included in the price of the cruise), the group linked by an audio system called “Quietvox”, usually with a local guide in charge.  Just don’t stray too far away from the person with the ‘lollipop’!

Passau is a German university city close to the Austrian border and lies at the meeting of the Danube, Inn and Ilz rivers.  Known as the Three Rivers City Dreiflüssestadt, it is overlooked by the Veste Oberhaus, a 13th-century hilltop fortress housing a city museum and observation tower.  It is an easy walk from the river across the Inn and gives a great view of the old town including St Stephen's Cathedral, featuring distinctive onion-domed towers and an organ with 17,974 pipes said to be the largest church organ in the world.  Strolling around the town there are many notable Baroque buildings, the cobblestones looking daunting and uncomfortable under foot but in fact easy to walk on.  To get us in the right mood entertainment was supplied on board in the evening by ‘Sounds of Austria’ including a superb rendition of Climb Every Mountain.  The lead singer came from Chicago, which kept the mainly American audience very happy.

Our second calling point was Linz, for some on board the gateway to Salzburg the city of Mozart, made famous by ‘The Sound of Music’.  The morning was spent in Linz itself, the centre once again a charming and typical Danube town with its market square but gaining a reputation as a future orientated location with the Lentos Museum of Modern Art sitting above our mooring point.  It is also the gateway to the Austrian Lake District with 76 lakes and a popular holiday destination.

It was then on to Ceský Krumlov, a gem of a tiny city, or better described as a ‘large village’, virtually an island surrounded by water.  Sited in the south eastern corner of what is now the Czech Republic it is a 90min drive from Passau, the border but a nominal signpost.  You can also take the train from Prague.  The local currency is the Koruna but Euros are universally accepted.  As a major tourist centre we found food and drink charges very reasonable.  It has been a UNESCO World Heritage Site since 1992.  The town is dominated by its 13th-century castle which has Gothic, Renaissance and Baroque elements, an 11-hectare garden and an original 17th-century Baroque theatre.  There are panoramic views of the old town and the river from the top of its round bell tower.  The River Vltava also provides for a popular canoeing venue.

You can’t get lost in Ceský Krumlov having a myriad of picturesque narrow cobbled street all leading, one way or the other to the market square where there is a torture museum, which we gave a miss.  Ceský Krumlov went through difficult times during the post war communist period but has now returned to its former glory as a wonderful example of a medieval town.  Except for the street lights and cleanliness it looks much as it was in years gone by.  If you want bed and breakfast it can be found but be prepared for low ceilings and limited facilities. 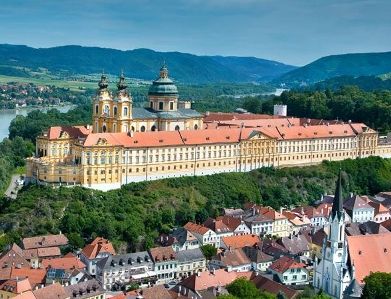 The Benedictine Abbey of Melk is massive and dates back to 1089.  These days it is the home of but 15 pious monks but also houses up to 900 students of both sexes in various disciplines of study.  The Abbey dates from 1702, but it caught fire in 1974, the result being a major rebuilding programme the fine outcome of which you see today.  Its hilltop position and sheer size is impressive together with quality of the restoration.  The library of the Melk Abbey consists of 12 rooms totalling 100,000 items.  One particularly impressive chamber holds 16,000 volumes arranged in various sections, including theology, history and geography.

Coaches took the AMA guests to the Abbey, perched high above the tiny town, but it was quite possible to walk down and even take one of four themed routes passing what is claimed to be “most splendid post house in Austria” and getting a glimpse of the countless Burgher houses, using the opportunity in the central square to partake in Glühwein, a hot spiced wine definitely needed on a very cold day. 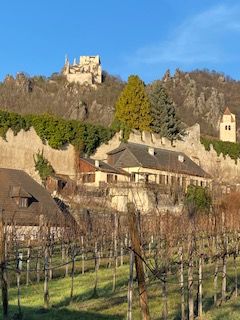 It is just 27mi from Melk to Krems with the four-hour navigation taking in some of the prettiest stretches of the complete Danube.  In the winter one can see very clearly the huge terracing on either side of the river, the vines noted for their high-quality white wines.  The cruise director supplied a fine commentary.  Krems itself is just another small Danube town with a railway station to Vienna. but it does have the ‘Heurigen’ wine tavern tucked away in its narrow streets.  It proved to be a splendid meeting point for the Magna travellers.

Just a couple of miles by coach from Krems is the small village of Dürnstein dominated by the ruins of its castle, 1000ft above the Danube.  It is a good 30min plus climb, the final steps rough and hard work.  Tours are graded and this one was 5!  Easily seen from the river, Dürnstein Castle’s great claim to fame is that it once hosted (if that is the right word) Richard The Lionheart.

King Richard, born in England but not an English speaker, was taken prisoner in Vienna and despatched to Dürnstein for ‘safe keeping’ and a King’s ransom.  He was on his way back from the Crusades, where he had apparently insulted Leopold V Duke of Babenbury, the Austrian ruler.  Perhaps Richard had the last laugh as Leopold was subsequently excommunicated by the then Pope.  England and its citizens paid the ransom.  Whatever the truth, Hollywood has prospered from Cœur de Lion and the tiny hamlet on the Danube, itself worth visiting.  AMA has a strange connection with the King, its Seine River cruise stopping at Les Andelys, and visiting the nearby castle called Château Gaillard which was built by England’s warrior king. (See BTN 2 July 2019) 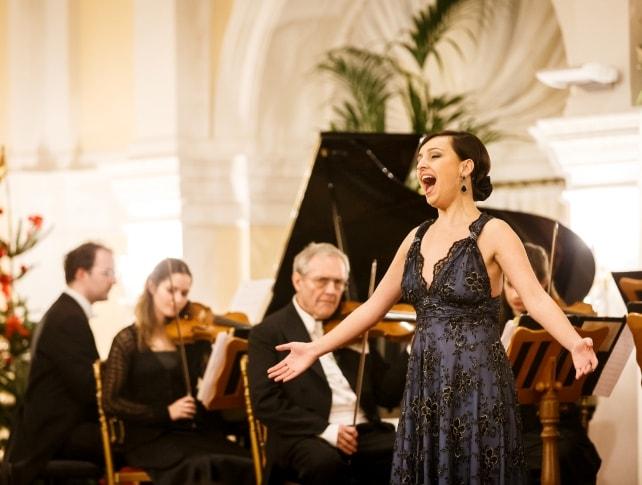 It is impossible to cover Vienna in a day.

The city dates back to Roman times, was the capital of the Hapsburg dynasty for 650 years.  It was called the Austro Hungarian Empire covering much of Eastern Europe and even had a powerful navy at the start of the ‘war to end all wars’ including Dreadnought battleships and submarines.  One result of WWI was the end of the Hapsburgs and the creation of a modern, much smaller Austria.

Austria’s First Republic was established in 1918, the country then seized by Nazi Germany prior to the WWII and after a period of annexation by the Allies became the Second Republic in 1955.  Austria is German speaking and part of the EU with a population of just 9m of whom 1.9m live in Vienna.  The coinage is the Euro. Three nights at least is required to scratch the surface of one of the world’s great tourist cities.

Our visit considered of a walking tour of central Imperial Vienna, rich in architectural wonders, Baroque mansions and lush gardens.  If the weather is kind a trip on the Wiener Riesenrad (Vienna Giant Wheel) is called for, sited at the entrance of the Prater amusement park in Leopoldstadt.  You can get married on the wheel or take a candlelight dinner for two (£365).  Our short day also offered extra tours to the magnificent Schonbrunn Palace, home of the Hapsburgs, and an evening concert featuring two of Vienna’s favourite and most famed composers, Mozart and Johan Strauss II.  What a way to complete a wonderful day. 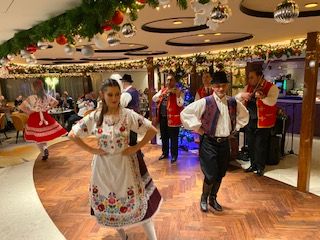 During the night we passed through Bratislava (Slovakia).  No stopping this time although some cruises dock at one of Europe’s smallest capitals only 40 miles from Vienna and a member of the EU.

For the majority of passengers our penultimate day started with an early lunch and the boarding of coaches at Esztergom, capital of Hungary from the 10th till the mid-13th century, when King Béla IV moved the royal seat to Buda.  Just as with Vienna one cannot take in Budapest in a single day but AMA made a valiant attempt.  Many people stayed on to take in more.

Budapest consists of two cities sitting on either side of the Danube officially combined in 1873.  Buda to the west hosts Buda Castle, the citadel fortification, and the President of Hungary's residence.  It looks down on Pest, mostly flat, the home of the Hungarian Parliament Building, the massive Heroes' Square and Andrássy Avenue 2.31km long, a traditional boulevard and recognised as a World Heritage Site.

Linking the two, the Széchenyi Chain Bridge was opened in 1849.  It was designed and built by British engineers, and was the first permanent bridge across the Danube in Hungary.  Destroyed at the end of the WWII by the retreating Germans it was quickly rebuilt and amazingly takes modern motor traffic.

Our long afternoon consisted of a walk along the heights of Buda to a panorama viewing point called Fisherman’s Bastion followed by a coach tour of Pest including the Jewish Quarter and reminders of the 1956 uprising which was to lead to the foundation of the present State in 1989, the freeing of Eastern Europe from Soviet Russia and the fall of Russian communism in 1991.  At Heroes' Square we got off for a quick taste of the symbolic centre of Budapest, iconic statue complex featuring the seven chieftains of the Magyars and other important Hungarian national leaders, as well as the Memorial Stone of Heroes.

For our final evening it was back to Magna, now moored safely near the city centre.  The Hungarian Folklore Group supplied the entertainment, Blue Danube and more.  A fine way to conclude what was a wonderful trip. 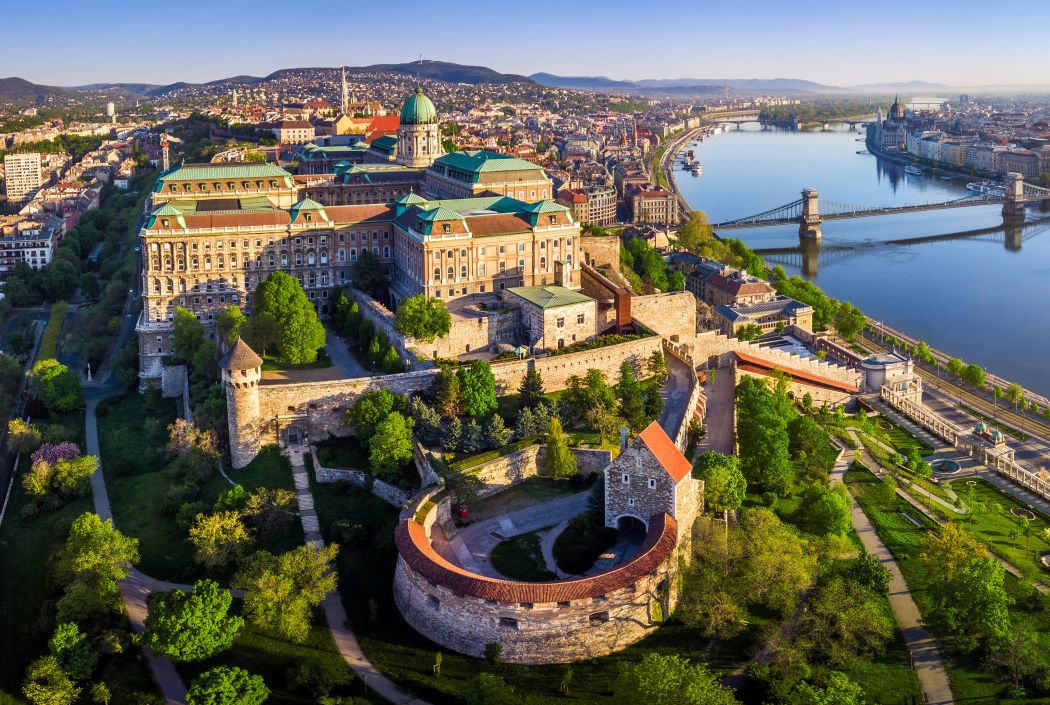