This week, AND FINALLY means what it says – it is the final farewell to Virgin Trains, which handed over the West Coast intercity route to First Trenitalia yesterday, 8 December. 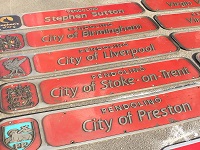 We will miss them, but there is good news to report. Charities are benefiting from the change after rail enthusiasts and employees raised more than £130,000 for sought-after memorabilia, including train nameplates (left).

Teenage Cancer Trust, Rethink Mental Illness and Severn Valley Railway Trust are among the beneficiaries, with winning bids for the nameplates ranging from £500 to more than £4,000. ‘City of Birmingham’ made the highest amount.

Most of the plates clocked up more than 3m miles at up to 125mph before their retirement, adorning Virgin's red Pendolinos and Super Voyagers.