ON THE SOAPBOX: Pieter Elbers - President and CEO KLM the world's oldest airline

Today, 7 October 2019,  KLM becomes the first airline to celebrate its genuine 100th birthday. As you will read the maiden flight was surprisingly from London to Amsterdam and last week the airline's president and CEO Pieter Elbers was at the residency of the Dutch ambassador Simon Smits to start the celebrations. 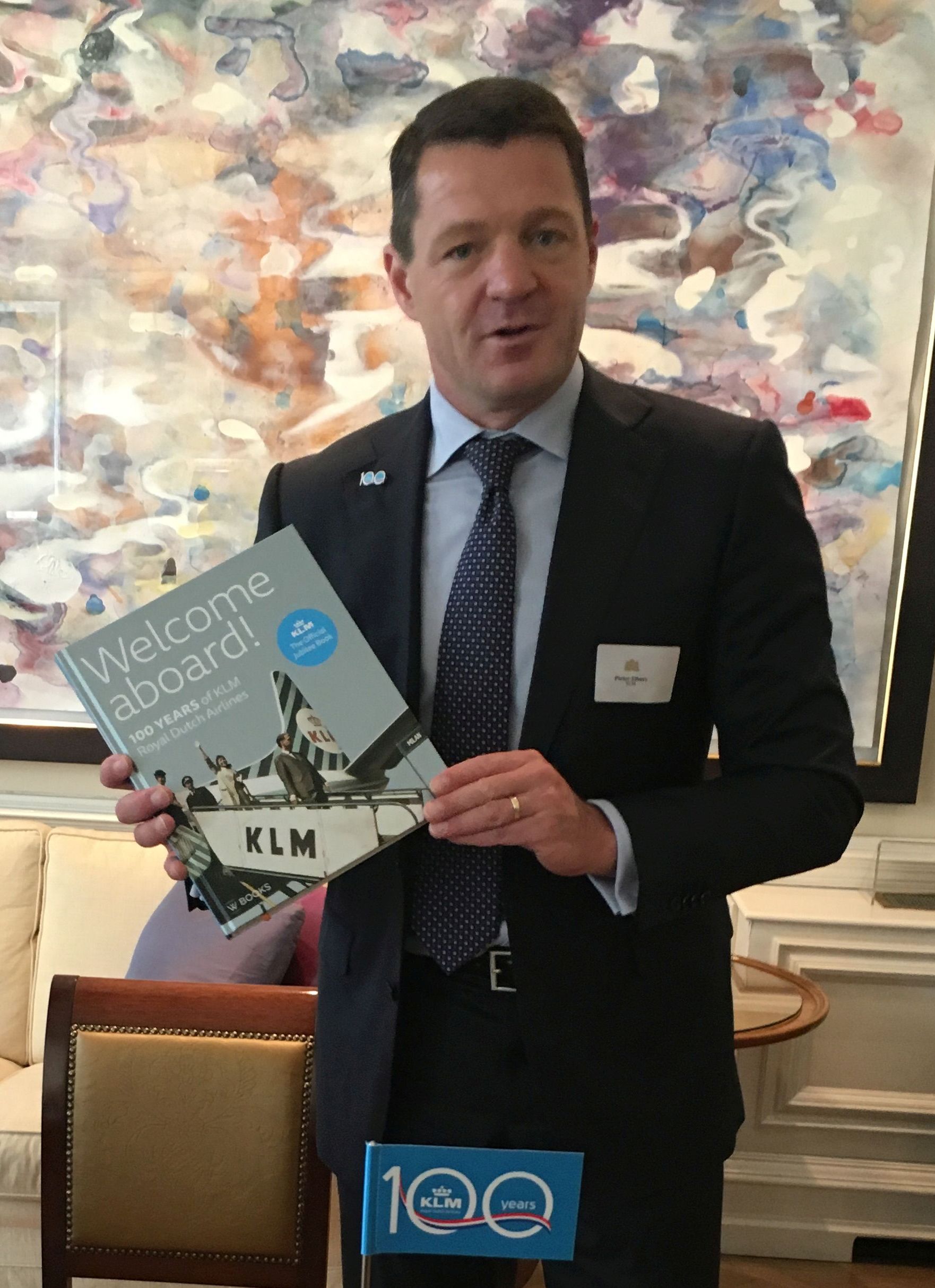 Pieter Elbers (49), a fluent English speaker, joined KLM in 1992 as supervisor aircraft loading at the Schiphol hub, followed by a number of managerial positions in the Netherlands as well as abroad for six years, including general/sales manager in Japan, Greece and Italy and then SVP Network & Alliances. Elbers was appointed to the board of managing directors in 2011 as chief operating officer. He is a member of the executive committee of the Air France-KLM Group. His present position dates from October 2014. It was in April 2004 that the merger with Air France took place.


At the residency Mr Elbers highlighted London’s role in today’s network, but also its relevance in KLM’s heritage and most importantly, its significance in the airline’s exciting plans for the future. His message was to UK customers and trade and corporate partners.

KLM’s history is steeped with true Dutch pioneering spirit, which can already be seen in the period leading up to the foundation of the company. It was established in 1919 with the royal support of Queen Wilhelmina and the initial investment of half a million pounds. This led to KLM's first commercial flight which departed Croydon for Amsterdam on 17 May 1920. The aircraft, leased by KLM, was flown by the British pilot Jerry Shaw, carrying two British journalists and Times newspapers. In 1920, KLM carried just 440 passengers – a far cry from the 34.4m passengers it flew in 2018.

In addition to pioneering, connecting has also been an important element of the airline’s DNA. The first KLM CEO Albert Plesman spoke about connecting at a very early stage. He wanted to connect the Netherlands to the world and the world to the Netherlands. The UK was clearly the first international destination to be part of this global dream.

What is also visible very early in the Dutch carrier’s history, is that KLM didn’t only connect destinations, but it connected to partner airlines. Cooperation with other airlines, such as Air UK, was always at the basis of the clear ambition to create a global network. Today, the UK is the country with the most departure points in the KLM global network. KLM offers passengers up to 60 flights a day from 16 airports across the UK. This strong regional presence is the airline’s unique selling point and under the leadership of Pieter Elbers proudly continues to provide UK businesses with worldwide connectivity from the comfort of their local airport.

This global customer base expects an international, customer centric approach and KLM is a company where service and customer satisfaction have always been central. Elbers speaks about how an open and pragmatic approach is deeply embedded in the DNA of KLM staff. He says “next to our great staff, it’s also about investing in our product.” KLM has now fully completed the upgrade of the World Business Class cabin with full flat seats, along with new and more comfortable seats in Economy. The airline will continue to invest in wi-fi on board and their new flagship KLM Crown Lounge at Schiphol Airport will further improve the customer experience for business passengers.

Elbers explains that while the focus on partners is deeply rooted in the airline’s past, it is also a very important part of the current and future strategy. Thanks to Air France-KLM’s strategic partnership with Virgin Atlantic and Delta Airlines, the Group is now in a position to offer even more choice to UK customers. The expanded joint venture, due to launch in the next couple of months, will offer 300 daily transatlantic services, accounting for 24% of the total transatlantic capacity. This means that the UK will become the third largest market for Air France-KLM and  Heathrow will become a third hub for the Group.

Looking ahead to the future, KLM continues to focus on innovation and digitalisation to further enhance the customer experience. Elbers explains that technology will also support in the transformation that will be essential not only for the airline but more importantly, for the whole industry – the sustainable transformation. Air France-KLM was recently ranked number one in the Dow Jones Sustainability Index. This is the 15th consecutive year that the Group is placed at the top end of the rankings.

Elber’s says “KLM are always looking for ways to further reduce our impact on the environment.” Some examples include fleet renewal, the development of Europe’s first sustainable aviation fuel plant and our partnership with the Technical University in Delft to build a plane for the future. But this is not enough and sustainability is not a one-airline topic. Elbers says “this is why, with our recent Fly Responsibly initiative, we have called upon all stakeholders across the industry to collaborate. We have offered our Gold Standard C02 offsetting programme to other airlines free of charge and free of branding to encourage more people to offset their flight emissions. Sustainability, like safety, is a topic which airlines cannot compete on, we need to work together towards a more sustainable future.” 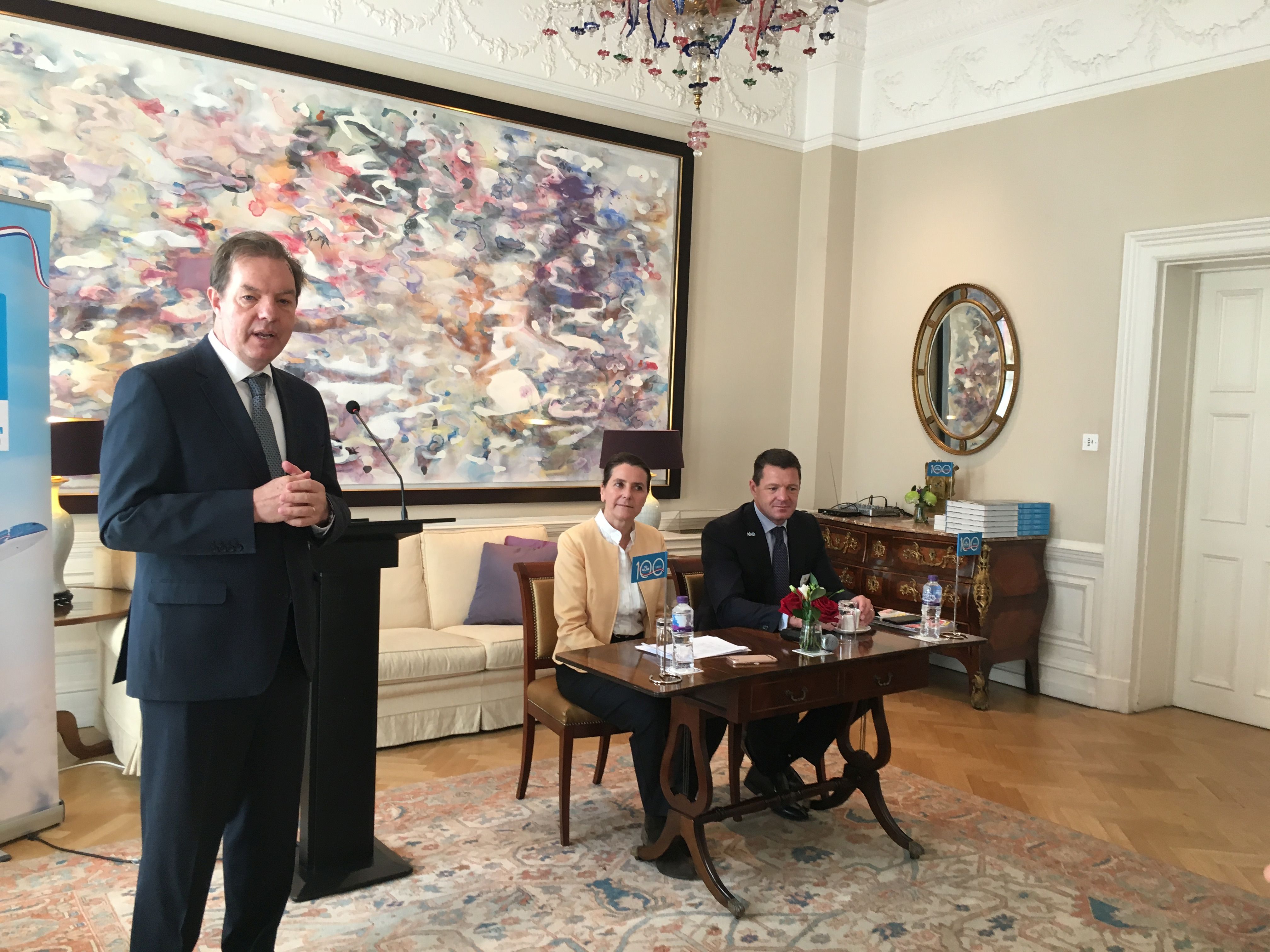