Following the recent UN summit on climate action, Cathay Pacific has pledged to triple all carbon offset donations up until 31 October made by passengers who take the action via the Fly Greener website. 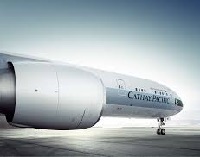 Cathay says the initiative is the latest step in a continuous drive to become a more sustainable airline. Fly Greener contributions go towards financing projects such as building renewable energy facilities in developing countries.

"Each project funded by Fly Greener is certified under the internationally-recognised Gold Standard certification programme, which means they are verifiable, credible and make a real difference to local communities," the airline noted.

Contributions made through Fly Greener are separate from the Air Passenger Duty (APD), a government-imposed tax on passengers flying out of the UK. Fly Greener is a voluntary scheme that enables passengers to offset their carbon by contributing directly to carbon reduction projects.

Cathay Pacific and its sister company Dragonair in 2007 became the first airlines in Asia to launch a carbon offset scheme as an extension of an in-house programme that already offset carbon emissions associated with travelling on business for staff of either airline,

Since the launch of Fly Greener in 2007, the airline and its customers have offset more than 160,000 tonnes of carbon dioxide – equating to more than 30m taxi journeys from Heathrow to the Shard skyscraper on London’s South Bank.