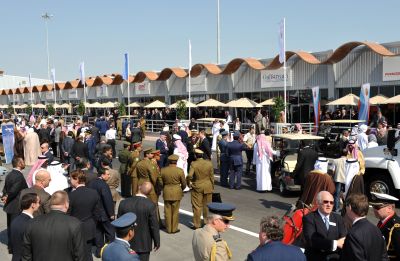 Following initial scepticism the inaugural Bahrain International Airshow, held at the Sakhir air base, has proved to be a resounding success for the aviation industry as a whole and for the Kingdom of Bahrain.  The show was organised by Farnborough International Ltd.

The site adjoins Bahrain’s Grand Prix racetrack the 3.36 mile circuit currently being extended to four miles in time for the opening race of the F1 season on Sunday 14 March.

The aerospace event hosted 40 participating companies, 94 aircraft and visiting delegations from 25 countries.  Early indications suggest that deals worth somewhere in the region of US$1bn were signed at the event with the attending companies from all over the world and 30,000 visiting the public and trade areas over the three days.

Boeing’s announced that it expects to deliver 1,700 aircraft in the next 20 years to the Middle East whilst on the Airbus front the huge hangar certainly helped found rumours of a Bahrain order for a pair of VIP Airbus A380.

Comlux and MAZ will base two of their Airbus aircraft, an A318 Elite and ACJ, in the region as a first phase, and by the end of this year an Airbus A320 Prestige will be added to the new company fleet when Comlux takes delivery on it.

''A presence in the Middle East is strategic to our VIP aircraft operations in Fly Comlux division.  This joint initiative between MAZ and Comlux follows our agreement for Saudi charter sales and represents a new step for our development into the Middle East,'' President of Comlux Group, Richard Gaona said.

Chairman of MAZ Aviation, Mohammed Al Zeer, said that the partnership was part of an effort to provide close support and services to their clients in the Middle East.

The UK’s Aerospace Defence and Security organisation, A|D|S (formerly known as the SBAC), announced it has chosen Bahrain to act as the central hub for the Middle East.  Gulf Aviation Academy, a wholly owned subsidiary of Bahrain Mumtalakat Holding Company, was launched and will play a key role in the development of Bahrain's air transport training and infrastructure.

“We are delighted by the results of the first Bahrain International Airshow. The show brought manufacturers and users under the same roof enabling them to do business effectively and uniquely, reflecting Bahrain's status as a regional centre for transport and trade. The strong presence of the leading aerospace and defence manufacturers signalled the inaugural show’s success and reflected Bahrain’s status as a pioneer in the aerospace industry in the Middle East. The airshow is a welcome boost to Bahrain’s economy and to its profile as a business centre in the region.”