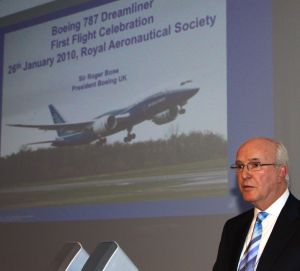 Sir Roger Bone has been President of Boeing UK since 2005.  Fluent in French, Swedish, Russian and Portuguese, Sir Roger has worked around the globe.  Prior to serving as British Ambassador in Brazil and Sweden, he was Political Counsellor at the British Embassy in Washington DC.  He was a Visiting Fellow at Harvard University and served as a Private Secretary to the Foreign Secretary (Francis Pym and then Sir Geoffrey Howe) between 1982 and 1984.  He was an Assistant Under-Secretary of State in the Foreign Office between 1991 and 1995.

“Boeing is a world leader in aerospace and has been for 75 years.  What is possibly not completely apparent, and something we are very proud of, is that Boeing is truly international, the products completed in our US factories the results of collaboration from partners all over the globe.

Britain has been to the forefront of this partnership and I say to UK industry and research, get out and sell yourself around the world.  Boeing is happy to demonstrate the results of co-operation, much of which goes back many years.  Typically Boeing has been Rolls-Royce powered since the start of the jet age.

The development of the 787 Dreamliner has been a 24/7 international programme.  When a Rolls-Royce Dreamliner takes to the skies around 25% of the value of the aircraft is British.

But that is just the tip of a British iceberg, if I can use that word, although the largest in pure monetary value.  Whilst Boeing has many long established relationships with the UK's aerospace industry, it is through the 787 programme that pioneering new systems and technologies have been developed with the vital contribution of partners here.  The scientific and industrial capability that has been applied to the Dreamliner spans a broad range of technologies including aerodynamics, composites, control surfaces, electronics, machining, fuel systems and simulation.

Whilst Rolls-Royce lead with the engines for the Dreamliner it is companies such as Goodrich in Wolverhampton, that produce vital parts.  The nacelle thrust reverser actuation system and the engine maintenance door opening system for the aircraft is an example.  It is unique in that it is the first commercial system to operate with a 5,000psi hydraulic supply and it is also the fastest moving commercial thrust reverser actuation system ever produced.  Elements of the fuel system are being manufactured by Eaton Aerospace in Bournemouth and Claverham near Bristol.

GKN and Ultra electronics are responsible for the wing ice protection system at Luton and Greenford.  The highly innovative arrangement works by embedding electro-thermal heater mats into the surface to be protected.  This is the first time that such technology has been deployed on a commercial aircraft.

QinetiQ in Farnborough has played a key role in the aerodynamic performance of the 787.  Stability, control and noise characteristic tests made an important contribution to aerodynamic design.  The long-term partnership between Boeing and QinetiQ safeguards jobs in Farnborough and sustains one of only three large-scale pressurised wind tunnels in the world.

B/E Aerospace in Newry is one of the selected Business Class seat suppliers and Ipeco in Southend is providing flight deck seating.

Boeing Training and Flight Services facility in Crawley will be the European flight and maintenance training centre to the Dreamliner.  The simulators are being built a short distance from Boeing in Crawley by Thales UK.

Significant weight savings for 787 come from Messier-Dowty and a new Titanium alloy.  The 787 landing gear benefits from new materials forming processes developed by the AMRC and further benefits in supply chain have spread across the UK to companies such as Corus in Sheffield.  The actuation systems for the nose and main gear systems are also being produced by GE Aviation.

One key attribute of the 787 will be the superior ride quality that stems from its gust suppression system.  Important to this system are the control surfaces of which the high lift actuation system is being manufactured in Wolverhampton.  Its primary function is to deploy the flap and slat to provide additional lift during take off and landing phases of aircraft operations.

In Cheltenham, GE Aviation Systems Division has developed the common core system that acts like the aeroplane's central nervous system.  This system alone will save thousands of pounds in weight.

In the world of research Britain has been to the forefront in supporting Boeing’s
efforts led by the Universities of Cranfield, Cambridge, and by no means least, Sheffield.

Some may recall many years ago an exodus of engineers from the then de Havilland to Seattle.  Times have moved on.  The Brits stay in Britain but are still a very important part of the Boeing infrastructure.  My plea is “tell the world what you are doing.”  Boeing is more than pleased to substantiate your efforts."