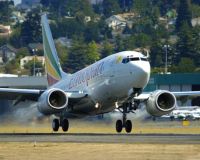 ETHIOPIA suffered an airline disaster on the evening of Sunday 21 January, a Boeing 737-800 of the country’s national airline went into the sea during a severe rainstorm just after take-off from Beirut.  There were no survivors.  The fight data recorders have been located at a depth of approximately 1300m.  At least 32 bodies have been recovered from the area by the search teams who include Lebanese naval personnel, members of the UN Interim Force in the Lebanon, the USS Ramage and a Cypriot vessel that has sonar equipment on board.  The aircraft was originally owned by Ryanair. www.ethiopianairlines.com