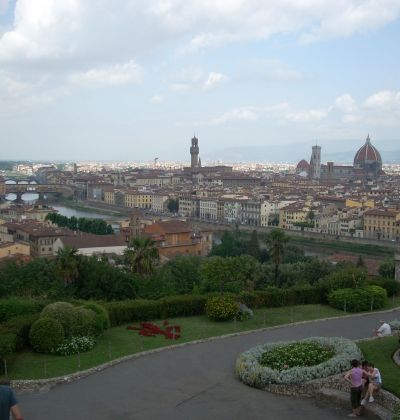 Florence is one of those places that ought to be a requirement to visit at least once in a lifetime.  Many go back numerous times.  It is one of the great cities of the Renaissance, easily the most complete, with a history that dates back to pre-Roman times.  It is not large and you can walk just about everywhere, with one notable exception.  The best overall views are obtained at the Piazza Michelangelo high up on the other side of the River Arno.  Naturally there is a copy of the great man’s statue of David.  It is probably the most copied statue in history.

From the UK direct flights are limited to Meridiana from Gatwick to the small city airport, and there are regular bus services from Pisa Airport which is much better connected.  Another way is via Milan. 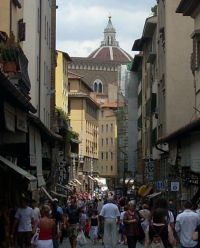 By road Florence is in on Italy’s A1, from Milan to Rome, which bypasses the city.  The main railway station is a rather odd 1930s design that somehow blends in with the Gothic surroundings.  It has high-speed services to Rome, and very recently to Bologna with connections to Milan and the European rail network.  Cruise passengers sailing in for the day at Livorno can easily make Florence by road, 75 miles through the Tuscany countryside.  The train is an alternative

With one or two exceptions Florence is without any multi-national branded hotels, and most of properties are relatively small in the Italian tradition.  Typical is the Palazzo Magnani Feroni, just 12 elegant and spacious suites, decorated with antique Florentine furnishing but also equipped with all the latest comforts and services.  The building was a palace in the 15th century.  At the other end of the scale the Grand Hotel Mediterraneo has 331 rooms within a modern building that blends into the history that surrounds it. 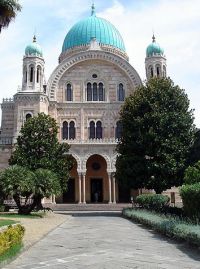 Florence has been an UNESCO World Heritage site since 1982.  Tradition has it that it was established by Julius Caesar in 59 BC but it is probably far, far older.  In 774 the city and Tuscany was conquered by Charlemagne.  From about the start of the second millennium its golden age began to emerge.  For a time it was one of the richest and wealthiest of European cities.  The Medici family emerged as patrons of the arts commissioning works by Michelangelo, Leonardo da Vinci and Botticelli.

What you see today is the result of competition between various families and hierarchy’s in trying to build the biggest and best.  For a short time (1865-1870) it was the capital of the Kingdom of Italy.  The magnificent synagogue (1875) is a demonstration of the commercial wealth of the city 500 years after Michelangelo was born.

The famous medieval stone built Ponte Vecchio bridge on the Arno was not destroyed by the Germans at the end of WWII and today is full of jewellery shops, art dealers and other tourist attractions.  In its heyday it mainly housed butchers.  You can guess where the unused carcasses went.

At this point it is probably best to briefly describe some of the things to see and do in Florence. 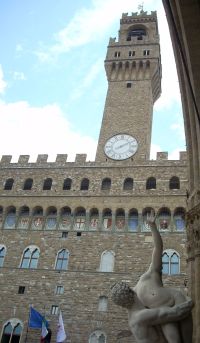 The Palazzo Vecchio is the town hall of Florence.  This massive, gothic fortress-palace is impressive overlooking the Piazza della Signoria with its one hundred year old copy of Michelangelo’s famous David statue as well as the gallery of statues in the adjacent Loggia dei Lanzi.  It is one of the most significant public places in Italy.

The actual David itself is housed in the Accademia dell'Arte del Disegno, founded in 1561 with patronage of the Medici by Giorgio Vasari, Agnolo Bronzino and Bartolommeo Ammannati, three of the central artists of Mannerism.

Michelangelo died in Rome in 1564 aged 89 and whilst that city wished to offer itself as his final resting place his wishes were fulfilled and he is buried in the Basilica di Santa Croce (Basilica of the Holy Cross), the principal Franciscan church of Florence.  It lies to the east of the central area close by the National Library, another magnificent building but dating only from 1935.

The Uffizi Gallery is one of the oldest and most famous art museums in the world.  In 1560, Giorgio Vasari built the palace for Cosimo I de' Medici as the offices for the Florentine magistrates.

The massive cathedral church, called the Duomo, was begun in 1296 but its elaborate neo-Gothic façade was not added until towards the end of the 19th century.  The adjoining bell tower offers an unique view of the city and the surroundings.  But be warned, there is usually a long queue and it has 414 steps. 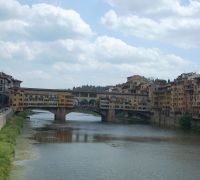 In a short review it is impossible to mention everything regarding this iconic city, suffice to say that all the following either lived within its environs or were closely involved.  Boccaccio, Botticelli, Brunelleschi, Roberto Cavalli, Dante, Donatello, Galileoi, Guccio Gucci, Machiavelli, Catherine de' Medici, Michelangelo and Emilio Pucci.  And many others too.  Building after building has its connections.

If you have not been add Florence to your “to do” list.  You will not regret it.