Just over 18 months since rejoining Ryanair as chief operating officer, Peter Bellew announced his resignation last week and plans to leave the airline at the end of December. 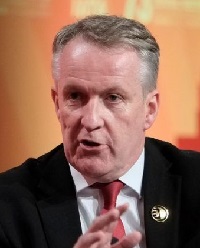 The former Malaysia Airlines CEO returned to Ryanair in the aftermath of the September 2017 rostering problems (BTN 23 October 2017), and was credited by Ryanair last week for his “great work”.

Local media noted Bellew, 54, had been tipped to head Ryanair’s main airline division, a new position, but told financial news agency Bloomberg his decision to go was unrelated to the appointment and there was “nothing personal” behind it.

In a text message, Bellew added: “Operations in great shape and a super team in place … there are lots of opportunities globally.”

A native of Bettystown in Co Meath, Bellew, previously a senior director at Kerry Airport in the 1990s, spent almost a decade at Ryanair before leaving in 2014, eventually joining Malaysia Airlines as it sought to recover from two fatal crashes.

As CEO, he reported to the then-new chief executive, Christoph Mueller, a former head of Aer Lingus, who had left that airline earlier in 2015 to help to turn around the Asian carrier.