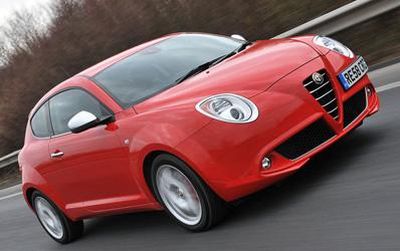 I always find a special aura about any Alfa Romeo car and the latest Mito model is no exception.  Some may compartmentalise this car as a hatch back, perhaps an alternative to any similar sized offering from the mainstream car makers but I think they would be wrong.

Viewed from the front, the styling of the three-door body is certainly racy, almost aggressive, from the side more a coupe than a hatch and from the rear I would suggest a sport wagon.  I therefore declare the Alfa Romeo Mito a coupe pitched price wise to compete in many respects with much less exciting competitors.

In creating the Mito (the name a combination of Milan and Turin) Alfa Romeo has, in my mind, drawn on its experience of the impressive performing Alfasud and 133 designs of more than a decade ago and also cribbed some of the current family styling of larger bodied models.  Naturally, they have also prioritised driver satisfaction and overall performance.

The current 13-car range, priced from £10,745 to £14,745 and employing three trim levels, is based on a 1.4-litre petrol engine in various stages of power output plus 1.3 and 1.4 litre turbo diesel units.  As I expected most of units have been proven by use in some guise in the Fiat family range and all produce power characteristics that combine good refinement levels with competitive power outputs.  What else would one expect from Alfa Romeo?

I have been driving the flagship model, the 1.4-litre turbocharged petrol fuelled 155 bhp model in top Veloce trim and using a 6-speed manual gearbox.  A 5-speed gearbox offered on the less potent models but so far no news of an automatic option.

This car’s aggressive/exciting looks invite occupation of the driving seat which proved to me to be quite an experience.

The seating position is low in true sports car tradition, the driver comfort is good though the seat contouring is not that figure hugging and the adjustable steering column is good for reach but limited on tilt adjust.

Pedal positioning proved to be a bit tight for my average sized shoes and the foot rest positioning can be a bit challenging according to the individual driver’s physical dimensions.  Without doubt a traditional Alfa Romeo experience heightened by the business-like fascia with its instrument dials retaining Italian script – I think, acqua, giro and benzina are ‘cooler’ than the English – temperature, rpm and fuel!

The term ‘cool’ can also be applied to the car’s overall interior styling which includes a racy leather covered steering wheel with metal spokes and more metal or metal effect materials distributed around the cockpit area in a sensible rather than trendy manner.

To me, the effect is being in a car that is a bit more than a run of the mill hatch back and this fact is driven home once the ignition is turned on and a graphic on the fascia depicts an image of a Mito coming at you (turn off and the image reverts to an example driving away) and with the next turn of the key the turbocharged engine wakes up with a distinctive engine note as is required by any self-respecting Alfa Romeo driver.

Before even selecting first gear from the positive but rather loose changing gearbox you can have the choice of determine what degree of driver excitement you require.  Situated close to the gear lever is an innocuous looking slide type spring loaded switch known as the DNA system which selects Dynamic, Normal or All-weather driving modes.  This acts on engine performance, power steering, traction control throttle response and the boost pressure of the turbo.

In Dynamic mode the driver benefits from sharper response but at the expense of a harder ride and I would suggest that most of the time the Mito would travel in the Normal mode though I also query whether this system is really necessary when I know the Mito has the CV of an excellent driving car.

the Mitio can shift WITH top speed aclaimed 134 mph with 62 mph (100 kph) reached in a very competitive 8 seconds.  A combined fuel consumption of 43.5 mpg reminds me that the engine’s pedigree is based on some of the most efficient power units in the business.

What is more, the performance character manages to combine a good deal of refinement for such a small but potent power unit with the essential charisma that is present in virtually every Alfa product I sampled, even the very old ones.

Once I accommodated the softness of the gear change action I realised that the response through the steering and all disc braking system enabled the good road grip to be fully exploited with generous safety margins that did not necessarily draw on too much driver effort.  Here is a versatile compact four seat (just) car that can easily cope with either a city commute or a day long mile-eating journey in a manner that soon gets taken for granted.

Is the Mito practical?  That depends on the individual.  For example the rear space is not generous though the boot space is probably just above average for the class, and the rear seat fold as one unless you pay the extra and have split fold facility.

You get four smart alloy wheels but have to make do with a puncture repair kit in place of a spare.

The safety note has been played strongly, both front seats have anti-whip-lash active head rests and the car has gained a 5-Star NCAP rating for passenger protection though I suspect the bold frontal styling contributes to a mere 2-star pedestrian rating.

Without doubt the Mito is a typical example of the increasingly high standards of product quality that is being achieved by the Fiat Group and without doubt it competes on all the important requirements for those wanting a bit more than a mainstream hatch back.  My test car was black but for me there is ever only one colour for any Alfa and that is red!

USEFUL: For those stuck in a snow drift Laser Tools (www.lasertools.co.uk) is offering a neat and strong metal folding snow shovel that comes in a neat bag and measures just 28 x 32 cm x 1.5 m when packed and unfolds to 66 cm. Price around £19.99. For those who really get stuck in their car or out in the elements Kamasa (www.kamasa.co.uk) is offering an emergency light weight heat retaining blanket that is packed to easily fit into a car’s glove compartment or an anorak pocket for £1.99.

LAND ROVER: A sports-style Land Rover Freelander 2 is due to launch.  Features will include 19” diamond turned alloy wheels, two-tone Ebony & Storm interior and a rear spoiler.

MAZDA: An extensively revised Mazda 5 compact MPV model range is just arriving in UK showrooms. Six variants are offered using a choice of four engines and three specification levels. On road prices start at £17,150 and a £4,000 scrappage discount is available.

SEAT: The Spanish SEAT car range has been named the most improved used car brand of the decade. The award is only offered every ten years.