In a possible dress rehearsal for its predicted transatlantic launch, US carrier JetBlue has hailed the impending delivery of its first Airbus A321neo by announcing it will begin non-stop service between New York and Guayaquil in Ecuador next winter. 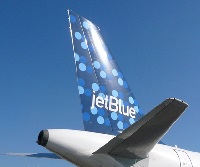 JetBlue says it will launch the Guayaquil service on 5 December, pending government approval. Flights will operate daily and the route will become the longest in the airline’s network by 200nmi.

In language similar to that used to describe the London – New York route, JetBlue officials have accused other carriers of creating a New York – Guayaquil market with high fares and limited connecting flight choices and says it will bring prices down.

Route planning director Andrea Lusso said: “The A321neo opens up a world of new possibilities as we think about the future of our growing network, building out our focus cities and offering new and unique non-stop routes to our customers.”

We'd like to see a Paris service as well. JetBlue impressed me very favourably when I took it (in the US). Bring it to Paris!