ON TOUR: A short break in Israel 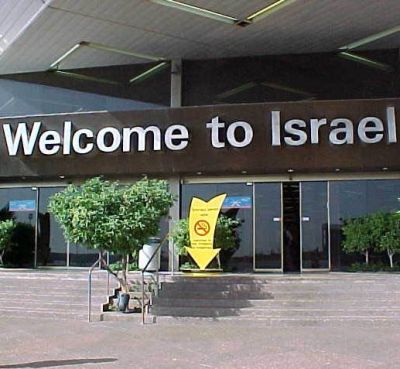 2009 was a record year for travel between Israel and the United Kingdom.  Whether this high record of tourism will continue in 2010 depends on two factors.  Firstly the continuing peace between the Jewish state and its close Arab states.  Secondly whether the loss of bmi, with its twice daily services out of Heathrow, can be compensated by easyJet from Luton, who only operate six days a week, and with a smaller aircraft in short haul tight European configuration, rather than a proper international Economy Class.

Close on one million passengers flew between the UK and Israel in 2009, the official figures likely to show a 10% increase, a 15% rise on 2007.  However outbound traffic from Israel probably made up half this number with possibly 30% connecting.  Israelis are great travellers, worldwide.

Refugees of all kinds
Israel was created in 1948 by the United Nations, partially due to international embarrassment for the Holocaust.  Even the Russians voted for the establishment of the state, formerly a British protectorate, and previously for many, many centuries part of the Turkish Empire.  Whilst for the most part Jews were dispersed in Roman times, a core population have always remained, essentially in Jerusalem, Jaffa and Safed.

Up to 500,000 Palestinians were displaced in 1948, but at least the same number of Jews, probably more, were exiled from their homes in Arab states, in many cases essential business people, medical experts and professionals.  Some Arabs chose to stay and today the community is represented in the Knesset (parliament).

The new State quickly integrated the arrivals from overseas into Israeli society.  For the most part the displaced  Arabs went into refugee camps and were left to fester, neighbouring states refusing to help.  They have multiplied.  This is the core of today’s Middle East problem.

In Israel one felt completely relaxed, the same as if in London, the security surprisingly discreet. 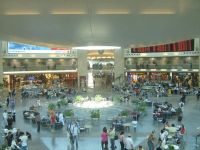 Ben Gurion Tel Aviv (TLV) is the only international airport in Israel, the extremely modern Terminal 3 completed at the back end of 2004.  There is an integrated railway station with services to Tel Aviv and a link to Jerusalem set for 2012.  Whilst the Israeli security is highly rated the whole operation runs smoothly and is a credit to the country.  Most international airlines operate to T3, the old terminal, now known as T1, is home for easyJet and domestic flights to Eilat.  You can also fly to Israel’s southern gateway from Sde Dove, located on the coast, just to the north of Tel Aviv’s city centre.

Most of the multi-national car hire companies are represented at the airport, our tour operator Issta Direct making the arrangements with Budget (and organising everything else).  A Fiat Punto may not be the ideal car for use at home, but for two people it proved to be an economical runabout in Israel, easy to park, a reasonable ride, and fast enough to cause no embarrassment.

Dealt with quickly at the airport at a ridiculously early hour we were quickly on our way, our destination Tiberius a two-hour mainly dual-carriageway drive to the north.  The road signs are in English and Hebrew and providing you keep your wits about you not too daunting.

This trip to Israel was but four nights, very much a mid-winter break, but with an overnight four-hour-plus flight out and an evening return in fact six days of remarkably warm weather was thoroughly enjoyed.

The ancient town of Tiberias

Your Editor in Chief had never been to Tiberias previously, the town as old as written history and sitting on the western shore of the Sea of Galilee.  For Christians in particular it has strong connotations. Also known as Lake Kinneret, it is a fresh water lake, and part of the River Jordan complex.  You can easily drive around the lake in a couple of hours, the Israeli controlled Golan Heights on the eastern shore dominating the whole area.  It is easy to see why the Jewish state wants to remain in control of this important strategic area.

To the north is Safed, and more anon, whilst the Jordan departs at the southern extremity near the little resort village of Kinneret.

We stayed at the renamed Leonardo Plaza, once a Sheraton, and right in the centre of what is now a popular tourist town.  It is a fine four-star holiday property, air conditioned, with a large open air swimming pool.  You can dine in the hotel in the evening, or in one of the many nearby restaurants.  Nothing too sophisticated, that you will find for the most part in Tel Aviv and Jerusalem.

Tiberias is named after the Roman Emperor of the same name and has been an important centre since those times, with more than its fair share of prosperity, learning and the occasional massacre.  Walking around you can see the remains of  occupation from overseas including the Crusaders, the Ottomans and in more recent times, the British.  One hundred years ago a census noted that the population had reached 6,500.  This included 4,500 Jews, 1,600 Muslims and the rest Christians. 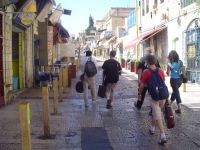 One hour north of Tiberias via a very twisty road, and 800m above sea level, is the city of Safed, a serious seat of Jewish learning since the beginning of the last millennium, and today very much dominated by tourism.  It is a fascinating ancient town mainly built on the hillside.  It is the spiritual home of Kabbalah.

Park with care and explore with your feet.  Safed has a thriving artist colony and is a living museum of paintings, tiny galleries, all on the internet and happy to take dollars, euros, Russian roubles and the pound sterling.  Or a credit card.

Safed is also the home of the largest Crusader castle in the Middle East, and at the opposite end of the spectrum the Jewish quarter with its narrow cobble-stoned streets and ancient synagogues.

For the tourist the Galilee has an enormous amount to offer.  You can go kayaking at Kfar Blum, near the Lebanese border, sample some superb wines at Kibbutz Yiron, or take in one of the National Parks.  At Rosh Hanikra you can ride in what is claimed to be the steepest cable car in the world.  The kibbutz movement is in decline but here in the northern extremities of Israel they still seem to thrive with some offering hotel accommodation to a high standard including indoor swimming pools. 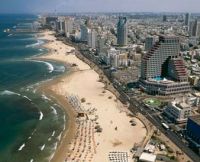 Tiberias to Tel Aviv is an easy run, making sure that one does not take the road to Haifa.  Our accommodation was again by LeonardoPlaza (previously Moriah), this particular hotel one of a gaggle of internationally branded properties along what must equate with Rio’s Copacabana as one of the finest city centre beaches anywhere in the world.

If not offering the world’s greatest cuisine the Israeli breakfasts are at least something else.  No need to bother about lunch.  At the very top of the Moriah an executive lounge offered a courtesy early evening buffet and quality wines.  Wireless and internet facilities were also provided.

The city was one hundred years old in 2009, and celebrated wildly.  Jaffa, which forms the southern extremity, is vastly older having claimed amongst its visitors Jonah, with or without his whale, St Peter, Richard the Lionheart and Napoleon.  An organized walking tour is well worthwhile taking, descending from Kedumim Square and its interesting museum, through many narrow passageways, to the actual port itself.

Tel Aviv promotes itself to be “the city that never sleeps” with a vibrant nightlife.  Once in the city a car is not a requirement, taxis are cheap, there is a good bus service and Israel is steadily catching up when it comes to railway services.

You have to know your history.  Unlike certain other places the old names are retained.  There is Allenby, King George and Balfour streets right in the centre, and Dizengoff, the main thoroughfare and named after the first mayor of the city.  There is a fine zoo in Tel Aviv and Israel is noted for the quality of its serious music. 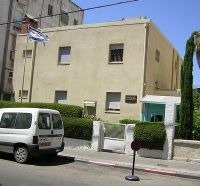 The city is full of museums perhaps one of the most interesting (and near the Moriah) is dedicated to, and the former home of, Israel’s leader during the War of Independence, David ben Gurion.  There are some wonderful letters of support from the great people of those times including Winston Churchill, Eleanor Roosevelt and John Kennedy.  A prodigious reader, his library contains 20,000 volumes.

“The Old Port”, but in fact only built in 1936 and closed in 1965, (with the opening of the modern terminal at Ashdod) is now a thriving leisure and nightlife area.  With the promenade stretching all the way from Jaffa, it is extremely accessible, designer shops open during the daytime and into the evening and  an abundance of restaurants and nightlife once it gets dark.

One thing to bear in mind when visiting Israel by air.  Make sure you get back to the airport in plenty of time.  Israel sells it security all around the world and the authorities are slow and thorough at Ben Gurion.

British Airways and El Al fly from Heathrow and easyJet and El Al from Luton.  Jet2 has services from Manchester.