As promised last week on delivery of the aircraft from the manufacturer, fast-growing Wizz Air on Friday welcomed its first brand new Airbus A321neo to the tarmac at Luton Airport (BTN 11 March). 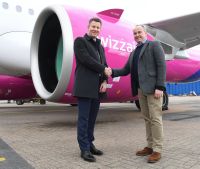 Based in Budapest, the new-generation aircraft, which Wizz has hailed as “ultra-efficient”, will be rostered regularly on the airline’s route between Luton and its home base.

The A321neo is equipped with the latest technology, which in turn will deliver significant environmental benefits, including reduced emissions, lower fuel burn, and an almost 50% reduction in noise footprint compared to previous generation aircraft.

Managing director UK Owain Jones said: “The arrival of our brand new A321neo to our Luton base is a major milestone for Wizz Air in the UK in terms of our industry-leading growth and our ambition to become one of the greenest airlines in the sky."

Wizz followed its A321 news by announcing a new service between Luton and Stavanger. It will begin in September and operate on Mondays, Wednesdays, Fridays and Sundays.

Stavanger is the fifth Nordic destination for Wizz out of Luton, following recently announced connections to Bergen and Oslo in Norway, Turku in Finland and Billund in Denmark.