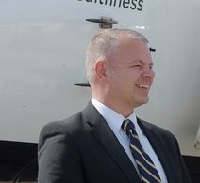 The Scottish-based carrier has also provided another major boost for City of Derry Airport by announcing a new daily service to Manchester.

As part of the PSO contract, Loganair will begin operating to Stansted from Wednesday, 27 February, providing two services each weekday and on Sundays alongside a single Saturday flight.

On 24 May, the airline will begin a new daily service to Manchester with a 49-seat Embraer 145 jet, with a flight-time of 70min and offering a convenient gateway to northwest England and worldwide flights with partner airlines at Manchester.

Hinkle noted the route was an important link to London and the South East with a schedule tailored to the needs of the business community, while the new Manchester route marked a further expansion of Loganair’s destination map from Derry, building its relationship with the airport and providing more choice to customers.