On the eve of a visit to Brooklands Museum, BTN editor Richard Cawthorne samples its next-door-neighbour hotel. 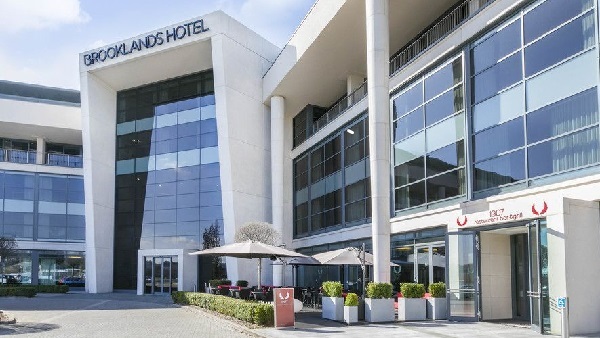 The first thing you notice about Brooklands Hotel is its size and striking architecture, a bold, modern, white concrete-and-glass statement building with a touch of Art Deco that is continued inside, along with reminders of the famous race track that forms part of the background.

I was here so I could have an early start for a visit the next day to Brooklands Museum, a short walk away, and its historic car and aircraft collections. It was also a chance to see the equally-popular Mercedes-Benz World, though time did not permit a proper exploration. It was, however, another clue to the look and standard of the hotel – when you have Mercedes as a neighbour, you have a certain style to live up to.

One of the big selling points for the hotel is that many of the rooms overlook the Mercedes-Benz World racetrack. It’s a direct link to motoring history, since the property itself was built nine years ago on the Soloman Straight of the Brooklands circuit and its generous use of glass in the picture windows, especially in the range of what are called ‘super suites’, gives a lavish view of the layout.

Other acknowledgements to the past come in the form of spark plugs turned into works of art, lightshades resembling car headlights and – for aviation fans, in a nod to Brooklands’ other major claim to fame – a row of stylised aircraft propellers leading to the bar.

Overall, it is a major operation. Opened with 120 bedrooms claimed to be some of the largest of any UK hotel, it added another 11 four years ago while renaming four of the super suites in honour of racing legends. Those thus recognised are Kay Petre, Noel Pope, Selwyn Edge and Percy Lambert.

BTN occupied the Percy Lambert Suite, a huge space which true to its billing offered views of the Mercedes-Benz World track and featured a large decked terrace with outdoor furniture. Other features included a king-size bed with 100% cotton linen, separate living room and bedroom, dining table and chairs, free wi-fi and a large TV with a range of in-room entertainment services. I also enjoyed the walk-in rain shower and separate bath, bathrobe and slippers and free Pecksniff's toiletries.

Similar standards were evident throughout the hotel, including the AA Rosette-awarded 1907 restaurant, named for the year the Brooklands racetrack opened, where executive head chef Adam McLaren produces menus he describes as classical cooking with a modern interpretation. His starters of goat’s cheese and roasted beetroot salad, then crab and crispy noodle salad, followed by duck and passion fruit glaze with various exotic accompaniments, went down very well.

Other mod cons at Brooklands Hotel include the luxury BSpa with a newly-added Sunlight Therapy room, plus treatment rooms, outdoor hot tub, a meditation room and special areas for guest relaxation. There is a gym on the ground floor and the hotel also boasts extensive multi-purpose conference and event spaces.

Packages featuring a hotel stay combined with admission to the adjoining attractions are also available, including the Brooklands Museum Discovery Break and the Mercedes-Benz World 4x4 Driving Experience.

For an account of BTN’s visit to Brooklands Museum, see BTN 17 December 2018. 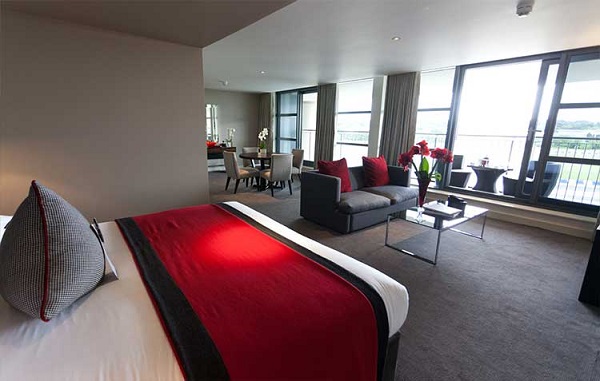