On a much-delayed first visit, BTN editor Richard Cawthorne explores one of the UK's foremost motorsport and aviation showcases at Brooklands Museum. 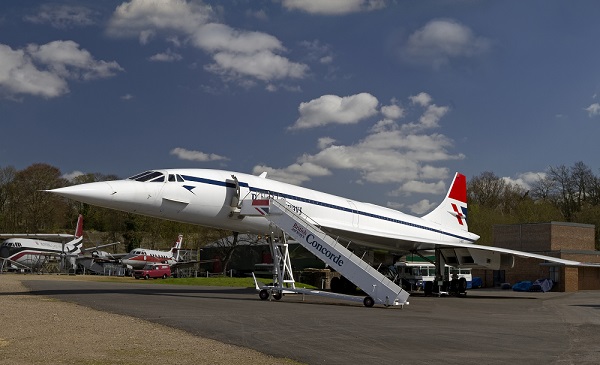 Brooklands Museum near Weybridge in Surrey bills itself as “the birthplace of British motorsport and aviation, and home of Concorde”. To many people with a certain turn of mind, such as those of us at  BTN, that makes it close to irresistible. I was slow to catch up but finally managed my inaugural visit this month. I was hosted by one of the band of volunteer and expert guides, former senior BA exec and ex-GBTA CEO David Reynolds, whose knowledge was invaluable.

Brooklands links two of the world’s great industries, cars and aircraft, by virtue of its long history of nurturing both, explained partly by its location and the facilities available there but also by the people it attracted, A V Roe and Barnes Wallis being among the famous names brought to mind by a visit.

If your inclination is toward the auto end of the scale, you can get the new year off to a – ahem – flying start and an idea of the scale of what Brooklands has to offer in that area by heading for the annual New Year’s Day Classic Gathering on 1 January. It is the largest event of its kind in the UK with everybody, whether driving a classic or not, welcome.

More than 1,000 vehicles are expected and with live music, a winter barbecue and other food outlets, officials are promising something for everyone among the diverse classic vehicles attending. Using the surviving sections of the original Brooklands race track including the recently-restored finishing straight, everything from Minis to Bentleys will be on show.

Visitors will be able to mingle among static displays that also take in the historic paddock and motoring village areas that were the centre of activity on race days and made Brooklands a popular destination for high society in the glamorous 1920s and ’30s.

For the aviation buffs among us, the good news is that all Brooklands’ exhibition areas will also be open including the aircraft collection, the award-winning Aircraft Factory and the Flight Shed. The factory came within an ace of carrying off the hugely-prestigious 2018 Art Fund Museum of the Year prize, pipped at the post only by the much-richer Tate St Ives art gallery.

It is a large and one-of-a-kind exhibition telling the story of aviation design, testing and manufacture over an 80yr period at Brooklands through interactive displays, assembly lines and workshops. Beyond it, on a connecting walkway from a new mezzanine level, is the flight shed, which houses some of the museum’s live aircraft, and leads out to the north end of the finishing straight.

To accommodate the numbers of motorcycles, trucks, hot rods and classics expected, the 1 January festivities will also spread to Brooklands’ Aircraft Park, where the museum’s collection of Vickers-built aircraft will be open for visitors, plus what many visitors see as the museum’s star turn, the Brooklands Concorde, which will be available for the popular half-hour Concorde Experience tours.

Costing £5 per adult and £3 per child, the tour includes a Concorde boarding pass, a pre-flight briefing underneath the aircraft, the interactive exhibition on board and a film on the restoration project when Concorde arrived at Brooklands. Participants are then invited to sit in the real Concorde passenger seats and take off on a virtual Concorde flight. It all ends with presentation of a Concorde flight certificate. It’s highly-popular and pre-booking is highly recommended.

Another star among several in the outdoor aircraft collection is the VC10 that once belonged to the Sultan of Oman. Brooklands bills it as “the ultimate British airliner – the biggest, most luxurious aircraft ever put into production in the UK”. Also, like much of what is on display and a large part of the museum’s appeal is the fact that it was designed and built where you are standing.

Concorde remains the lead attraction for many air-minded visitors to Brooklands but it has a rival in the centrepiece at the Aircraft Factory in the shape of the so-called “Loch Ness Wellington”, R for Robert. Fittingly, the factory was formerly Brooklands’ Wellington Hangar.

It has now been transformed thanks to a Heritage Lottery Fund grant as part of a re-engineering project designed to restore and relocate the Grade II-listed WWII building, build a new annexe – the Flight Shed – behind it to house the live historic aircraft and restore the finishing straight of the Brooklands racetrack, the world’s first purpose-built motor-racing circuit.

The hangar, built in 1940, now stands in its new position refitted inside and with a collection of aircraft sections in various stages of construction set against the backdrop of a working factory. “R for Robert” is one of only two Wellingtons in existence and the only one of those that saw action in the war.

It ditched in Loch Ness in December 1940 while on a training flight, was discovered 45 years later by monster hunters, salvaged, and delivered to Brooklands by British Aerospace in September 1985. It is exhibited in its partially-restored condition, another impressive addition to Brooklands’ collection.

Set on jacks above it is a complete Hawker P.1127, forerunner of the Harrier, while on the ground floor, assembly lines, workshops, tooling, carpentry and a fabric shop are just some of the interactive areas where visitors can try out testing and manufacturing techniques as they would have been carried out at the site.

Cycling is in vogue. Brooklands includes what must be the world's largest cycle exhibition. Former mayor Johnson might wish to try out some brakeless examples 100 years old. Somewhere within Brooklands is a Raleigh child's three-wheeler  raced around Grosvenor House by world racing champion Graham Hill. It was won by the younger Emerson Fittapaldi.

By personal preference, my visit concentrated on Brooklands’ aviation heritage but as noted there is much for auto fans too, including the evocative London Bus Museum. The whole story is contained on one of the best websites of its kind I have seen, divided into sections covering the birth of Brooklands and of flying, the aviation industry, cycling, motorcycling, motor racing, the history of the museum and its buildings and landmarks plus exact details of what the collections contain – including such lovelies as the 24-litre Napier-Railton endurance record and track racing car and a 1929 Bentley 4.5-litre Le Mans.

For the icing on the cake of a visit, indulge in a stay at the Brooklands Hotel, overlooking the racetrack at the nearby Mercedes-Benz World and a 15min walk from the museum. The hotel will feature in a future ON TOUR. 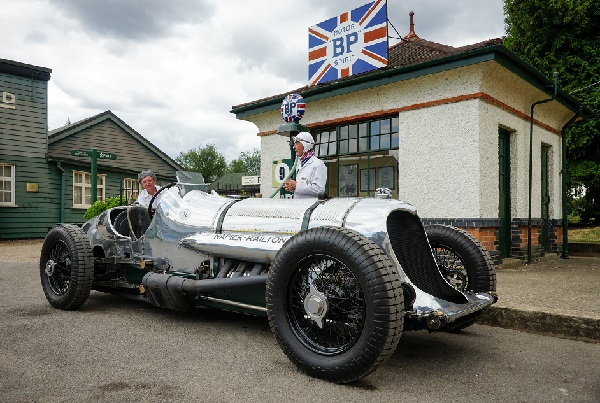 Thank you for this excellent write-up. Brooklands Museum deserves and needs more publicity, it is a hidden gem and replete with the history of both motor racing and aviation. Many of the staff are volunteers and their enthusiasm and knowledge is what makes the museum so successful.