The reputation of airport food was given another lift last week after the Crowne Plaza London Heathrow Terminal 4 was awarded an AA Rosette for its restaurant, Urban Brasserie, just four months after its official opening last October. 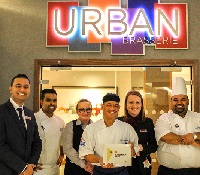 The AA praised the “eclectic selection of dishes” and added: “From grills to the more innovative offerings, expect big flavours and accurate cookery from the skilful team.”

Tekkle said: “We work hard to provide a relaxing ambience and inventive food. We are now working toward a second rosette with a new spring menu launching soon.”

The Crowne Plaza forms part of a dual-branded property with a Holiday Inn Express and was the largest hotel to open in the UK in 2018 and the largest hotel complex directly connected to a British airport terminal.